From Cadillacs to Kias

Employers have another tool to use against decent health insurance for working-class people--thanks to Barack Obama's health care law, as Elizabeth Schulte explains.

WHEN RONALD Reagan wanted to gut social spending in the 1980s, he spun a story about welfare recipients--"welfare queens," to be exact--riding around in Cadillacs and living large off the government. This fantasy of the right wing was a lie, of course--a fabrication with no grounding in reality, but effective in scapegoating poor and working-class people.

Today, the Cadillac is figuring prominently in another scapegoating campaign--one that claims working-class people with good union health insurance plans are getting something they don't deserve.

In the era of Barack Obama's Affordable Care Act (ACA), "Cadillac health care" is the term of choice for insurance coverage with features that were once standard in good health plans: low deductibles, little or no co-payments, no restrictions on treatment, free choice of doctors and health care facilities. The idea was that people who worked hard all their lives deserved the security of quality care and comprehensive insurance in case of accident or illness, for themselves and their families. 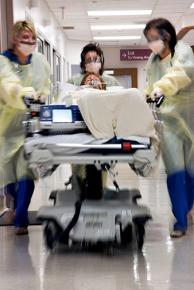 But that idea is being flipped on its head today. According to the media's conventional wisdom and the presumptions of the Obama health care law itself, quality care is a luxury item--a "Cadillac." If you're lucky enough to have one, you're taking more than you deserve--and you need to be punished for it.

Senate Majority Leader Harry Reid made it clear what was wrong with the "Cadillacs" in August:

One of the things we've learned with all of the hearings we held, dozens and dozens of them, is that if you have insurance, you have to be able to have some skin in the game, as we say in Las Vegas. And that means you just can't keep running to the doctor with no deductible whatsoever. These are referred to as the Cadillac plans. And the Cadillac plans weren't fair to other people.

Thus, Obama's ACA imposes a punitive tax on employers who provide "Cadillac" health care plans. The stated idea is to reduce health care costs by pressuring companies into imposing more controls and restrictions on care. But of course, the real impact has been to give employers an excuse to slice away at coverage.

A recent Forbes headline--"Labor Unions' Latest Problem: Obamacare's 'Cadillac Tax' Harms Their Gold-Plated Health Insurance Plans"--spoke volumes about the contempt Corporate America feels for union workers. So it shouldn't be any surprise that workers are finding their Cadillac plans--if they still had them to begin with--are turning into Kias.

UNDER THE ACA, starting in 2018, employers will have to begin paying "Cadillac taxes" on insurance plans with premiums above $10,200 a year for an individual or $27,500 for a family. They would be taxed at a 40 percent rate for any amount over those limits--a drastic enough penalty to guarantee that companies will try to cut the costs of premiums by whatever means.

In reality, according to the Economic Policy Institute, because the Cadillac tax is focused on taxing high premiums, not high levels of coverage, the companies that could face penalties are those with a higher proportion of workers who need health care, such as older workers--even if the benefits from their plans aren't great.

But long before the first "Cadillac tax" is imposed, the ACA's future penalties are being used now by employers as an excuse to make deep cuts in benefits.

In August, United Parcel Service (UPS) sent a memo to nonunion employees announcing that in 2014, it was cutting off benefits to spouses who could be covered by some other means. The reason, according to the memo, was: "Since the Affordable Care Act requires employers to provide affordable coverage, we believe your spouse should be covered by their own employer--just as UPS has a responsibility to offer coverage to you, our employee."

So far, UPS is the largest company to use the ACA as an excuse to toss spouses off health care coverage, but it's not the only one. According to a survey by the corporate consulting firm Mercer, in 2012, 6 percent of companies with 500 or more employees excluded coverage for working spouses--double the percentage from 2008.

Meanwhile, Xerox this year began charging a $1,000 annual penalty on employees who enroll working spouses in their health care plan--and the fee will rise to $1,500 next year. Mercer found that another 6 percent of employers imposed this kind of surcharge.

Many companies calculate that they can avoid paying the Cadillac tax if they get rid of coverage for spouses--especially those in child-bearing years, or what Julie Stone, a senior benefits consultant at Towers Watson, calls "a cost driver." As Steve Noury of HMS Employer Solutions told Kaiser Health News, "When health care reform came on the scene a few years ago, we definitely saw an uptick in companies wanting to explore a working-spouse provision."

THIS RACE to the bottom in health care has been fueled by the pro-business posture of the Obama administration, where the concerns of Corporate America have won out at every step of the way.

So, for instance, in July, the administration announced that it was delaying the so-called "employer mandate"--which requires companies with 50 or more employees to offer "affordable" health insurance to workers--until at least January 2015. But the "individual mandate"--the ACA's requirement for everyone in the U.S. to have health insurance, or pay a penalty with their annual taxes--will go into effect by the original deadline of January 2014.

One effect of the delay in the "employer mandate," according to Jenny Brown writing in Labor Notes, could be to allow some employers to use what's called the "Walmart loophole"--to avoid ACA fines for not insuring workers by making sure employees make so little that they qualify for Medicaid.

For the most part, though, the ACA's rules have been more effective in giving companies an excuse to scrimp on health insurance and pass the cost onto workers.

Thus, one strategy for employers to avoid the Cadillac tax is to offer plans with lower premiums, but higher deductibles before insurance begins to pay for care. More than a third of workers covered by insurance are now in plans with annual deductibles of $1,000 or more, and 14 percent have deductibles of more than $2,000.

"The lower premiums comply with the Obamacare requirement that less than 9.5 percent of your income go to premiums," explained Brown. "But the law doesn't take into account how much you spend on deductibles and co-pays in employer-provided insurance, creating pressure to get less care."

In other words, rather than preventing wasteful spending on unnecessary care--the supposed reasoning behind the ACA's provisions on "Cadillac" plans--companies have actually found a new way to provide less health care at greater expense to workers.

Teamster members at UPS aren't yet the target of the new spousal benefit rule, but it's a safe bet they will be in the future. Greater health care costs for workers, such as higher contributions for retirees, are already at the center of ongoing contract negotiations at UPS. Unacceptable health care offers in some regional supplements motivated workers in some areas to organize for "no" votes on company proposals in June.

In an effort to talk up a new contract offer in Chicago, some Teamster representatives are taking a pretty dark approach. They're emphasizing a provision of the new contract that offers health care to spouses--for five years after the employees dies.

It's what I call the "It's a Wonderful Life" provision of the contract. Just like Jimmy Stewart's character in the holiday classic, any union worker at UPS has to figure that their family might be better off if they were dead.

Like many people in the U.S., I've gone through some years without health insurance--though I count myself among the lucky ones who never had to go into debt because I got sick.

Today, I'm covered by my spouse's union health care plan at UPS, which means that if I need to go to the hospital, I'm covered; if I need a prescription, it's covered; and yes, if I need a check-up, that's covered, too. There are co-pays, of course, but they're small compared to other plans. For now.

It's not the strict definition of a "Cadillac plan." The top Teamster health plans under national contracts like UPS, freight and carhaul cost around $15,000 a year, including dental and vision, according to Teamsters for a Democratic Union.

But UPS acts as if we're getting a Ferrari. It's an upside-down world, in which a Fortune 100 company with an ever-expanding presence around the globe pretends that its U.S. workers, whose starting pay is $8.50 an hour, are the ones who need to tighten their belts.

THE OBAMA health care law contains important regulations on the insurance companies--like stopping them from rejecting people because of "pre-existing" health conditions--though these new rules have been compromised and qualified half to death. But anything good about the health care law is outweighed by the provisions designed to protect the profits of the health care industry.

The logic of the ACA is that increased coverage for many, though not all, of the uninsured must come along with cutbacks in access to care for others--as Harry Reid says, everyone has to have "skin in the game."

It could have been different. In 2003, long before he was a presidential candidate, Barack Obama described a completely different vision of what health care could look like at a union gathering in Illinois:

I happen to be a proponent of a single-payer universal health care program. I see no reason why the United States of America, the wealthiest country in the history of the world, spending 14 percent of its Gross National Product on health care cannot provide basic health insurance to everybody...everybody in, nobody out.

The truth is that government-run, single-payer health care would have guaranteed health care for everyone--but this doesn't have a chance as long as Corporate America is calling the shots.

By the time he became president in 2009, Obama had transformed his goals for "reform" into something that could be palatable to Corporate America--and with every bargain and compromise in the negotiations over health care legislation, his administration showed that its real loyalties lay with the medical-pharmaceutical-insurance complex. The havoc being wreaked on those workers who still have decent health care plans is a direct result of all that compromise.

Some unions are taking a stand against the way the Obama health care law is being used to further undermine workers' living standards.

In September, the International Longshore and Warehouse Union announced it was ending its affiliation with the AFL-CIO, with the health care law as one of the issues it cited. The International Brotherhood of Electrical Workers passed a convention resolution in favor of a single-payer health care system, as have other unions. At the AFL-CIO convention in Los Angeles last week, Terence O'Sullivan, president of the Laborers union, said, "If the Affordable Care Act is not fixed, and it destroys the health and welfare funds that we have fought for and stand for, then I believe it needs to be repealed."

But when it came time for the convention to pass a resolution on health care, federation President Rich Trumka--who reportedly received a call from Barack Obama himself--made sure none of the motions calling for repeal of the law made it through.

No worker should ever be told they have "too much health care." It's impossible to have "too much" access to the medicines, treatments, facilities and health care resources that could be used to keep people alive and living better and fuller lives.

But as long as Corporate America is allowed to write the U.S. government's health care policy, that's what we're going to keep on hearing.