Revolution from the inside out

Eric Ruder reports on a New York teach-in that painted a portrait of the rebellion.

ABOUT 100 people attended a November 17 teach-in in New York City to learn about, discuss and debate the Syrian revolution. The event, organized by the Middle East North Africa Solidarity Network-U.S. under the title "Syria in the Context of the Arab Uprisings," featured an impressive line-up of Syrian revolutionaries, solidarity activists and antiwar campaigners.

The Syrian revolution began almost three years ago with a series of mobilizations that courageously defied the regime of dictator Bashir al-Assad--and maintained a strategy of nonviolence even as Assad's security forces murdered protesters.

The uprising was motivated by the same factors that spurred similar revolts across the Arab world, beginning with Tunisia and Egypt in early 2011 and spreading across the region. In the words of Leila Shrooms, a human rights activist of Syrian origin, the revolution in Syria is borne of resistance to political repression and neoliberalism.

The teach-in sought to dispel several myths about the revolution--myths spread by mainstream media coverage with the shameful complicity of some left-wing and antiwar forces. So far, more than 135,000 have died in the violence, according to the latest figures, and the United Nations estimates that fully one-quarter of Syria's population will be either internally or externally displaced by the end of 2014, given current trends. 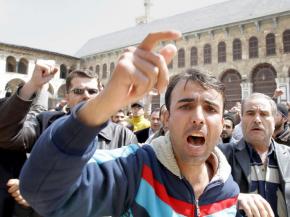 Media portrayals of the conflict focus on the growing influence of al Qaeda-affiliated sectarian militias on the one hand, and Assad's vicious repression on the other. By contrast, those on the left who defend the dictatorship try to portray all opposition to the regime as a product of the sectarian militias backed by outside powers that seek proxy forces to influence events inside Syria.

But as Yusef Khalil, a New York City activist and one of the conference organizers, stated in his introduction to the day's meetings, "We should not have to choose between dictatorship and imperialism, which has guaranteed that we'll suffer from both." The goal of the teach-in, he explained, was to hear directly from participants and eyewitnesses to the Syrian revolutionary process in order to better understand the sources and the grassroots of the popular uprising.

THE FIRST panel featured various accounts of the Syrian revolution that captured all the hope and exhilaration of the revolution's early days, as the fear borne of years of repression began to evaporate. The first protests were a moment of total freedom and euphoria, in the words of one panelist.

Ella Wind, co-editor of the Syria page on Jadaliyya.com, was living in Syria until April 2011. During a one-month span in which she left and then returned to Syria, the transformation was already plain to see, she said--friends of hers were holding conversations and making political jokes in public that they had a few weeks earlier dared not utter.

Media reports--along with the supposed "socialists" who support Assad--have tended to reflect the regime's rhetoric of pinning all resistance on "al-Qaeda extremists." This fits with the broader sectarian logic of the Assad dictatorship, which has attempted to maintain the loyalty of Alawite Shia military officers to keep its grip on the country.

Because many of the protests began in Sunni mosques after Friday prayers, it was possible to describe them as sectarian. But as Wind in described, the very threat of security forces opening fire made it impossible to simply assemble in public squares for protests. As a result, Christians and Alawites who wanted to join the protests started at the mosques, where they could gather without being fired on by Assad's agents.

As several speakers pointed out, the Assad regime had much to win and little to lose from using repression to chase the popular uprising from the streets. Once the struggle became militarized as a consequence of repression, the resistance to the regime was forced to compete on terrain favorable to Assad's security forces, with years of experience terrorizing the population into submission.

The revolutionary forces did succeed in forcing the regime to withdraw from large parts of northern Syria, and there, the revolutionary movement has assumed the task of coordinating economic and political life--to the best of its ability under such difficult conditions--by establishing more than 130 local councils in towns and villages through the region.

But as one panelist pointed out, we don't often hear about local coordinating committees because they don't have transnational networks and NGOs to publicize them--they are simply made up of small bands of civilians.

IN THE last year, the forces of the revolution have had to contend with multiplying counterrevolutionary forces that are attempting to impose their will on the situation. The jidahist militias such al-Nusra have used their superior arms--provided by various regional powers allied with the U.S.--to terrorize and kill revolutionaries who get in their way, according to Yasser Munif, a professor of sociology at Emerson College and cofounder the Global Campaign of Solidarity with the Syrian Revolution.

In fact, the Assad regime prefers its enemies to be the jihadis, rather than the popular uprising--because it's easier for the regime to mobilize political support for a war against religious fundamentalists. This explains why the Assad regime released some 1,500 hardened Islamist fighters from its prisons at the beginning of the revolution, while it has imprisoned, tortured and killed thousands of nonviolent and secular activists and revolutionaries, according to Nader Atassi, a Syrian political researcher and writer originally from Homs, whose blog Darth Nader provides ongoing coverage of events within the Syrian revolution.

Razan Ghazzawi, a Syrian blogger and media activist based in the liberated areas (she does not disclose her location due to security concerns), explained how the rise of the sectarian militias has complicated her already difficult conditions. She has increasingly found herself having to answer questions about why she's single, why she's an activist and why she doesn't cover her head.

She also described how NGOs use money to entice people like her to collaborate with the West, explaining that she had been offered a handsome salary to work at an organization based in a neighboring country. She lamented that many activists had been "seduced to leave" in this way.

The main concern of the world's most powerful countries, according to Munif, isn't the plight of Syrian civilians, but the possibility that Syria could be a "contagion in the region" that could spread instability. He describes Russia, Syria's main international backer, along with Iran, and the West as fighting out a mini-Cold War in Syria.

Gilbert Achcar, author of The People Want: A Radical Exploration of the Arab Uprising, explained that the U.S. is not anxious to repeat the mistake it made after its 2003 invasion of Iraq, when the Pentagon dismantled the Baathist state apparatuses previously presided over by Saddam Hussein, which created a vacuum that benefited Iran.

The debate between the imperialist powers, Achcar said, comes down to whether there should be Assadism with Assad (Russia) or Assadism without Assad (the U.S.).

In other words, both want to preserve the state and the role it has played as a force for stability--in particular, stability along Israel's border--while they disagree about the figurehead who sits at the top of the state structures. But the U.S. and Russia both oppose a successful popular uprising.

Sherry Wolf contributed to this article.