The ASA won’t be bullied

Purdue University professor Bill Mullen reports on the response to critics of the ASA's historic vote to honor the global academic and cultural boycott of Israel.

THE AMERICAN Studies Association (ASA) is facing down the predictable backlash against its historic mid-December resolution in support of the academic boycott of Israel.

Almost immediately after the overwhelming 2-to-1 passage of the resolution, the ASA faced a backlash organized by defenders of Israeli apartheid. In response, the ASA has issued a press release reiterating the social-justice motivations behind its resolution, while noting that its own members have been subjected to a campaign of harassment and intimidation for daring to break the wall of silence that for so long has muted any criticism within the U.S. academy of Israel's denial of Palestinian rights:

It has come to our attention that members of the American Studies Association (ASA) are getting hate mail or threatening mail following the ASA membership vote in favor of a resolution calling for boycott of Israeli universities. The ASA Facebook page has been subject to an avalanche of abusive postings for almost two weeks. In other cases, the intimidation has been less public as senior faculty have explicitly and implicitly intimidated junior faculty who support the boycott.

More generally within the academy, some are threatening to cut funds for faculty who want to attend the ASA in the future. We are also learning that individuals and groups outside the academy are threatening legal action against the ASA.

Expressions of hate and intimidation, even if they come from isolated individuals, constitute part of a larger pattern of attack on anyone who criticizes Israel or Zionism. These disturbing messages can take the form of threats. As such, they should not be dismissed or discarded. 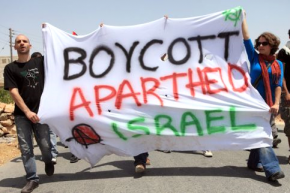 In addition to threats directed at individual members, the backlash against the ASA vote has taken the form of newspaper editorials, statements by university presidents and invective directed at the ASA on social media sites.

Both the Washington Post and Los Angeles Times, for example, published editorials condemning the ASA, while imposing a near-total "apartheid wall" against ASA members seeking to provide a counterpoint. Carolyn Karcher, a 39-year ASA member and longtime activist, was one of the few to break through.

The most virulent attacks, however, have come from university presidents. Kenyon College President Sean Decatur and Indiana University President Michael McRobbie not only condemned the ASA vote, but they also unilaterally and without consultation with faculty suspended the ASA membership of their American Studies programs. Presidents at Harvard, Purdue, Northwestern and University of Texas-Austin have likewise condemned the ASA vote.

In New York state, the administrations of CUNY, SUNY and New York University have issued statements against the boycott.

In addition, two Democratic politicians, state Sen. Jeffery Klein and Assemblyman (and notorious arch-Zionist) Dov Hikind, have threatened to introduce an anti-boycott bill into New York's state legislature. The proposed bill would remove state funding from any colleges in the state that did not sever ties with academic groups that support the boycott of Israel. Although the bill's legality and chances of passing are questionable, it represents part of an overall Zionist strategy of "lawfare," aiming to draw BDS supporters into expensive and time-consuming legal and media battles.

This strategy mirrors last year's unsuccessful attack on Brooklyn College, a campus of the public CUNY system, for hosting an event on BDS featuring Omar Barghouti and Judith Butler. State and city politicians, including many with progressive reputations, signed on to a letter threatening to strip Brooklyn College of public funding--although some later backed down when everyone from Mayor Michael Bloomberg to the New York Times defended the college's right to hold the event.

BUT THE ASA is fighting back--and it's tapping into a reserve of support from faculty and students across the U.S.

"With the vote to boycott Israeli universities, the ASA has embraced a legitimate means of addressing Israel's human rights violations and challenging the U.S. government's unconditional support for Israel," reads the ASA press release. "As we move forward, threats and insults will not silence our voices or undermine the growing support for the academic boycott."

For example, 21 faculty at Trinity College published an open letter to the college's president and dean who opposed the boycott. Likewise, eight scholars at three Indiana university campuses collaborated on a public response to the presidents of Purdue and Indiana University.

The strong response to media critics and university administrations is important for several reasons. First, it exposes the pro-Israel stance that unites the media and university administrators who defend U.S. imperialism in the Middle East and the "special" relationship between the U.S. and Israel. It also demonstrates the divide between members of the U.S. establishment and the rest of us on the question of Israel's occupation of Palestine.

Third, it demonstrates the broadening of Palestinian solidarity work across the U.S. As a result, the ASA vote has brought the boycott, divest and sanctions (BDS) movement closer to what Omar Barghouti calls a "tipping point" reminiscent of the 1980s campaign against South African apartheid. It has forced a public discussion of the occupation into new realms of public discourse and given renewed confidence and solidarity to Palestinian activists and Students for Justice in Palestine chapters across the country that have long been in the forefront of BDS work.

Finally, the arrogance that university presidents have displayed in speaking on behalf of "their" faculty and students against the boycott exposes how these highly paid functionaries think the neoliberal university is supposed to work--a rich and powerful elite flexing its political and ideological muscle to render the majority impotent. But in the words of the ASA release:

We are at a turning point when tactics of bullying and intimidation will no longer work to silence those of us who recognize the injustice of Israel's treatment of Palestinians. There is a growing number of students, junior faculty, senior faculty and prominent scholars advocating for Palestinian rights in the U.S., and we are working together, around the country and internationally, in the interest of addressing a social-justice issue, one which has been endorsed by the majority of ASA members and the national leadership.

The ASA goes on to advise those subject to intimidation not to bear such abuse silently:

Instead, we suggest you document the incident (when, who, where, what format, content, etc.) and report it to the ASA Academic and Community Caucus at [email protected] so that we can address the incident via legal channels and in a way that is least burdensome to you.

Intimidation and frivolous legal arguments against boycott are part of a long-standing history of repression of Palestinian human rights activism in the United States. The ASA resolution for boycott is legal. Tactics of intimidation may be illegal. We will try to address any academics and administrators who participate in undemocratic, unethical and illegal behavior, and if necessary we will take legal action with the support of our legal team.

Laura Durkay contributed to this article.