State of the unequal union

IF YOU'RE a regular reader of SocialistWorker.org, you've seen the statistics before about the growing divide between the super-rich and the rest of us. But on Tuesday, you'll hear them from an unusual source: President Barack Obama, during his State of the Union speech.

In an attempt to "reboot his presidency," as the conventional media wisdom repeatedly declares, Obama will focus his primetime address to a joint session of Congress on the issues of growing inequality and declining social mobility.

There will be poll-tested proposals for raising the minimum wage, making college more affordable, etc.--measures that might do some good if Obama and the Democrats in Congress fought for them against the Republican obstructionists who have dominated the mainstream political discussion for most of the Obama years, despite getting thrashed in three of the last four elections.

Compared to the budget-cutting, union-hating, poor-scapegoating maniacs of the Republican Party, Obama will probably sound like a radical. But the key words there are "sound like." When it comes to doing something about inequality in the U.S. and around the world, Obama is part of the problem, not the solution. 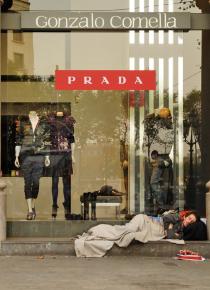 Obama is coming off a bad year for his presidency, despite winning the public relations battle with Republicans during the government shutdown. His job approval rating is at one of its low points, currently 43 percent, with 49 percent disapproving--a consequence of the disastrous introduction of Obama's health care law, discontent with the National Security Agency's Big Brother spying programs and other issues.

Thus, the cynical effort to portray Obama as an advocate of the have-nots. "The president sees this as a year of action," White House Press Secretary Jay Carney said on an ABC political talk show, "to lift folks who want to come up into the middle class." (No word on what Obama will do for people who prefer poverty and don't want to be lifted up.)

Focusing on inequality is an obvious move for Democrats, particularly after the Fight for 15 living wage struggles and labor organizing at Wal-Mart have pushed the plight of low-wage workers into the headlines.

There is almost no partisan gap on the question: 61 percent of Republicans, 68 percent of Democrats and 67 percent of independents tell pollsters that they think economic inequality has grown in the U.S. in the past 10 years. Seven in 10 people think the federal government ought to do something to reduce the wealth gap.

The reason for the agreement across the political spectrum, of course, is that the growth in social inequality is so large and so naked, it can't be denied or explained away.

For more than 30 years, real wages for U.S. workers on the bottom half of the income ladder have stagnated or dropped, while the super-richest 1 percent doubled their share of the national income to nearly 20 percent. The Great Recession accelerated the process: Since the low point of the financial crisis at the end of 2008, the wealthiest 1 percent in the U.S. captured 95 percent of all economic growth, while the bottom 90 percent of people became poorer.

Inequality is even more stark on an international scale. According to a new Oxfam report, the world's 85 richest individuals control more wealth than the poorest half of the global population combined.

It's hard to fully grasp statistics like this. If you were to stand the extra-super-rich 85 shoulder to shoulder, their line would stretch for barely half a football field. Line up the world's poor who collectively have as much wealth, and they would circle the earth more than 13,000 times. Tip their lineup into outer space, and they would stretch to the sun and far beyond, almost to the rings of the planet Saturn.

SO MOST people in the U.S. get that inequality is a problem, and the government should do something about it. But not everyone. Case in point: David Brooks.

In a profoundly ignorant article in mid-January, the conservative New York Times columnist urged his readers to stop with the "primitive zero-sum mentality [where] you assume growing affluence for the rich must somehow be causing the immobility of the poor."

Poverty, according to Brooks, is the result not of a tiny few amassing great wealth at the expense of everybody else, but the behavior of the poor themselves: they drop out of high school, they don't work full time, they become single mothers, they "[engage] in behaviors that damage their long-term earning prospects."

It's a time-honored tactic of conservative ideologues: turn the spotlight away from social injustice and put it on the supposed moral defects of the poor--even though it's blatantly obvious that the social problems afflicting the poor have everything to do with a society that's structured to keep them that way.

The poor have higher high school dropout rates because they go to inferior schools in a public education system that segregates them from students from better-off families. They don't work full time because they can't find full-time jobs in an economy where it's enormously profitable for Corporate America to make fewer workers work harder for less. They engage in the same negative "behaviors" as the rich, but pay a far steeper price for them--like going to jail for nonviolent drug offenses, while the children of the rich never see the inside of a police station.

WHEN IT comes to defending and extending their privileges, the super-rich rulers of a capitalist society don't do all the work themselves. They rely especially on their political servants--such as Barack Obama.

Growing inequality isn't an exclusively American phenomenon. According to the Oxfam report, between 1980 and 2012, the richest 1 percent increased their share of national income in 24 of 26 countries it studied. That's the product of a concerted offensive by capitalist ruling classes the world over, using a variety of strategies and tactics associated with what is known as "neoliberalism": globalized production, labor flexibility and casualization, union-busting, deregulation, privatization, dismantling the welfare state.

Obviously, the policies of national governments are essential to these strategies, which is why the rich internationally have placed such stress on wielding political influence, whether publicly or through back channels, directly or indirectly.

And it's paid off--big time. For example, since the late 1970s, tax rates for the richest parts of the population have fallen in 29 out of the 30 countries where Oxfam researchers could obtain data.

In the U.S., Republicans are known as the party of tax cuts for the rich. But like the other items on the neoliberal agenda, Barack Obama and the Democrats are committed to the same policies, though they sometimes differ on the details.

When Wall Street sunk into a financial crisis after its speculative gambles went bust, the new Obama administration continued the bailout of the bankers engineered by the Bush administration in late 2008. But there was little or nothing to help millions of homeowners facing foreclosure.

Led by the biggest banks, Corporate America returned to profitability with remarkable speed after the crash. But when long-term unemployment stayed high long after the official recovery began, Obama didn't propose government action to create jobs. Instead, he ensured himself a place in the history books as the austerity president by agreeing to budget cuts that will shrink the federal government far beyond what the most fanatical Republican was demanding a decade ago.

Obama may sound good talking about the plight of the have-nots in his State of the Union speech, but he was being more honest when he was yukking it up with corporate executives at the Wall Street Journal CEO Forum in November.

"People call me a socialist sometimes--but no, you've got to meet real socialists," Obama said to gales of knowing laughter. "I'm talking about lowering the corporate tax rate. My health care reform is based on the private marketplace. The stock market is looking pretty good last time I checked."

Workers and the poor in the U.S. should take Barack Obama at his word--this honest version of "his word," that is. He's on the side of the CEOs he was talking to in November--which is why any genuine challenge to the obscene inequality of a society divided between haves and have-little-or-nothing-at-alls will come from the bottom up.