The climate according to Nigel Lawson

Independent columnist Mark Steel examines the novel scientific theories of a member of the House of Lords and former Cabinet official under Margaret Thatcher.

I WONDER why Nigel Lawson was on the radio, telling us angrily that the floods in Britain have nothing to do with climate change. Will this be a regular slot, in which people from the 1980s are invited to shout, with no evidence, that everyone else is wrong? Next week, Depeche Mode will be screaming that the koala bear is actually a flower, then Torvill and Dean will yell that triangles only have two sides.

One of Nigel's points to show that scientists can't prove climate change was that "only a couple of months ago the Met Office were predicting that this would be an unusually dry winter."

Apart from the fact that unpredictable storms fit in perfectly with theories of global warming, Nigel Lawson seems to have confused the International Panel on Climate Change with the woman who does the weather on the television. Presumably, when Sian Lloyd says: "This low pressure should clear up by Tuesday," he shouts back, "How dare you expect me to get those useless energy-saving light bulbs, you know NOTHING"--which must be quite exhausting. 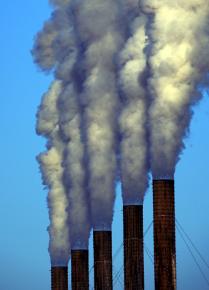 If he'd had the time he could have made other valid points, such as: "They know nothing about carbon emissions. Only last November they reckoned England would win The Ashes rugby league, so why should we take any notice of them?"

Then Sir Brian Hoskins, a climate change scientist, replied that in recent years, the seas have warmed by 0.8 percent, and that the West Antarctic ice sheet has receded to an unprecedented level, and along with other changes, this must have had an effect on the weather. To which Nigel replied: "That's extreme speculation. There's been no global warming for 15 years, and that's a FACT."

This is an innovative approach to science--saying that precise statistics from a knighted scientist are speculation, but you can tell a true fact because it's said by someone who says, "and that's a FACT." Those students who study for weeks before physics exams so they can calculate electric currents are wasting their time. They just need to write "Electricity is made up of tiny flames that live in a plug socket, and that's a FACT."

It's a method of argument often perfected by disgruntled men in the corner of Wetherspoon pubs. As it appears to be in vogue, this could be the new style of debate on news programs. John Humphrys will say that "a new 246-page report suggests an independent Scotland would be viable as an economy. With us to discuss the matter is Ted from the Moon Under Water in Stechford. Ted, what do you make of this?" And Ted will say: "It's all speculation, that is, they're planning to become part of China and put us all in labor camps, and that's a FACT."

So the reason we've been getting in a state is that we hadn't realized this cold/hot thing, and once we grasp that, we can get the Inuit to wrap up a bit and Arabs to stop riding camels while wearing a duvet, then no one need ever recycle anything again.

Maybe Lawson's next book will explain that there can't be global warming as it's colder at night, which comes after the day, which means--if anything--the planet's getting colder, and that the sun doesn't have any human activity, and that's even hotter than a hot day on Earth, so explain THAT.

But he did somehow find the space to say: "These floods are a wake-up call, to abandon the crazy costly policy of spending untold millions on useless wind turbines and solar panels." At last someone's had the common sense to say what the rest of us were thinking. Who hasn't watched these floods and thought, "It's those bloody wind turbines and solar panels that have caused all this."

The solar panels must stop the water from draining, as rivers can't get through glass. Then the wind turbines frighten the water so it runs off and hides in living rooms in Somerset. Other than this, though, it's hard to see how there's a connection, unless he's simply decided to use the issue to yell about something else that annoys him. Tomorrow, Nigel Farage can go on to say, "These floods are a wake-up call, that if you let any more Bulgarians in, we'll all be living in canoes."

The puzzling part is that among the scientists whose job it is to study these matters, there is no disagreement that rising carbon emissions have altered the climate. So continually debating it, as if both sides are equally valid, makes as much sense as saying: "Now for sport. In the Winter Olympics, the ski jumping final takes place today, but first, I'm going to talk to Bill, who says there can't be any ski jumping because gravity doesn't exist."

But the people we should feel sorry for most are probably those in government, who seem perplexed as to why there are less flood defenses then before. Who would have thought that cutting something would mean that that thing might be reduced in any way. No wonder so many people get confused.