They turned our schools into testing factories

Our kids and teachers deserve better than the disaster wrought by school "reformers."

AT SCHOOLS across the country, springtime means testing time. This year, however, springtime has also meant protests and boycotts--as teachers, students and parents in several cities stand up to the standardized testing mania.

Despite the best efforts of the corporate school "reform" advocates, there's a growing recognition of the impact of testing on students, as well as the threat posed to teachers and public schools in general by the corporate testing industry's imposition on public education.

Opposition to high-stakes testing entered the national spotlight last year when teachers at Garfield High School in Seattle voted to boycott the Measures of Academic Progress (MAP) test. The campaign spread to five high schools and forced the school district to back off its threats to suspend teachers who didn't administer the test.

The "Scrap the MAP" campaign linked the impact of testing on teachers, whose effectiveness is increasingly judged by this unfair measure, and students, who lose out on valuable resources and classroom time because of testing. People around the country--especially teachers--started paying attention. 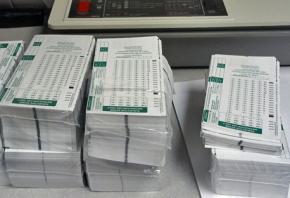 At that time, few people had heard of Common Core State Standards as the basis for standardized testing assessments--despite the fact that some 45 states had adopted them to conform to the Obama administration's "Race to the Top" program.

An August 2013 Pew Poll found that only a minority of people--even among parents with kids in public school--knew about Common Core. That same poll did show, however, that parents were starting to oppose the use of standardized testing for teacher evaluations--the percentage grew in just one year from 47 percent to 58 percent.

Today, even more people are confronting the issue of how standardized testing affects kids and their schools--and there's a growing confidence among teachers, students and parents alike that they can challenge how testing is destroying public school curriculums.

In New York state last fall, parents and teachers confronted State Education Commissioner John King about the stress inflicted on students by the test-infested Common Core standards. While the right wing was among the first vocal opponents of Common Core--most for all the wrong reasons, like worries about the impositions of so-called "big government"--the left is now taking up the fight.

In Chicago, teachers at Saucedo Elementary voted to boycott the Illinois Standards Achievement Test (ISAT). Their action spread to another school--and individual teachers, students and parents at other Chicago schools are opting out of what Chicago Teachers Union President Karen Lewis called an "unjust, unnecessary test."

WITH EVERY local struggle over testing, more evidence piles up that testing sets up our kids for failure--along with their teachers, teachers' unions and public schools as a whole.

Released in 2010, the Common Core standards were justified as an education equalizer--to address unevenness in testing and evaluations from state to state as a result of the Bush administration's No Child Left Behind (NCLB) law, which allowed individual states to write their own tests.

With the argument that NCLB was failing to close the "achievement gap between white and minority students," the higher standards in Common Core were supposed to raise all boats, especially at underserved Black and Latino schools.

But instead of leveling the playing field, the standards have widened the schools gap even further. As New York educators Carol Burris and Alan Aja wrote:

On the surface, this seemed like a telling moment in a so-called post-racial, color-blind era, one where racism and institutionalized discrimination are viewed less and less as predictors of life chances. At last it appeared that policymakers were acknowledging the disparate effects of previous federal education policy toward marginalized communities, recommending instead to "raise the standards" through a rich curriculum and equitable teaching practices states could voluntarily adopt.

Five years and 47 states later, Race to the Top reforms are doing anything but to the communities that have been underserved.

The consequences became clear last spring, when New York state changed its statewide tests to conform to Common Core. Only 31 percent of students in grades three through eight got scores classified as proficient in reading and math--a decline of almost half from the spring before. Among the most vulnerable students, the scores were even more dire. Only 3 percent of English language learners, 5 percent of students with disabilities and fewer than 20 percent of African American and Hispanic students passed the test.

Integral to the Common Core was the expectation that they would be tested on computers using online standardized exams. As Secretary Duncan's chief of staff wrote at the time, the Common Core was intended to create a national market for book publishers, technology companies, testing corporations and other vendors.

The tests and curriculum were designed not by educators who work in classrooms every day, but by representatives of the testing industry. The whole initiative was funded by a private entity, the Bill and Melinda Gates Foundation, which spent $200 million on think tanks to refine Common Core.

THE MANIA for standardized testing--like other aspects of the corporate school "reform" program, like school vouchers and charter schools--revolves around the idea that public schools are failing, and the private sector has to intervene to fix them. The problem, according to the self-proclaimed "reformers," isn't the gross underfunding of public schools in poor and working-class communities, but teachers--and, of course, their unions--who put their concerns over children's.

This twisted picture of public education was reinforced by the Obama administration, which backed school reform to the hilt. Education Secretary Arne Duncan--who rose to prominence as a public schools administrator, despite no background in education, during his time as head of the Chicago Public Schools, where his proudest achievement was replacing public schools with charters--has pushed a national education plan based on high-takes testing and performance-based pay for teachers.

But his boss is every bit as committed to the same agenda. Back on the campaign trail in 2008, Obama backed pro-privatization "reforms," including charter schools and performance-based pay and testing for teachers. "We must give teachers every tool they need to be successful," Obama said in a 2008 appearance, "but we also need to give every child the assurance that they'll have the teacher they need to be successful. That means setting a firm standard--teachers who are doing a poor job will get extra support, but if they still don't improve, they'll be replaced."

Meanwhile, the testing and charter school industries are making the best of the administration's "bold" changes--and laughing all the way to the bank.

Our kids, their teachers and their schools deserve better. Public schools should be just that: public, and not just another target for corporate profit. The decisions about how we want to educate a new generation should be handled by experts, with an emphasis on time spent in the classroom--not corporations dabbling in schooling with the aim of enhancing their bottom line.

STUDENTS DESERVE a better school day than one filling out bubble tests and serving as data factories. Neither students nor their teachers should have to worry about their futures because of a test.

There is an alternative to the standardized testing mania, and the "teaching to the test" that proceeds it. If you listen to the teachers, students and parents who are protesting the frenzy, you can start to envision that alternative. In a letter to Obama published in the Washington Post, Bertis Downs, a parent from Athens, Ga., invited the president to visit his daughter's school, Clarke Central, where:

students engage the works of Plato and learn to discern and make philosophical arguments about abstract concepts like piety; they read Hemingway and learn how to engage questions such as whether a protagonist's moral code can be attributed to the author. You cannot pick "A, B, C or D" for such things, or if you can, then the entire experience is trivialized.

Maybe after seeing Clarke Central in action, you can urge Education Secretary Arne Duncan to reassess the test-driven school "reform" that makes it harder for schools to educate their students successfully. Maybe your administration can recommit to the fundamental mission of American education: assuring access to quality education for all our children no matter their circumstances.

All children deserve schools with the resources to provide this kind of space for learning and experimenting and imagination--and that means devoting resources into small classrooms, more teachers and all the computers and other necessary resources. It means taking money away from the failed for-profit school industry and giving it to our public schools. As Diane Ravitch concluded:

We cannot have a decent democracy unless we begin with the supposition that every human life is of equal value. Our society already has far too much inequality of wealth and income. We should do nothing to stigmatize those who already get the least of society's advantages. We should bend our efforts to change our society so that each and every one of us has the opportunity to learn, the resources needed to learn, and the chance to have a good and decent life, regardless of one's test scores.