Minimal effort for the minimum wage

Obama and the Democrats want you to settle for empty rhetoric and idle promises.

THE FAILURE of a Democratic proposal to raise the federal minimum wage to $10.10 an hour played out like a tired movie script you've seen a hundred times before.

Long before the bill went down to defeat in a 54-42 vote in the U.S. Senate, the actors had played their parts: Republicans ranting against even a modest proposal to improve the lives of working people; billionaire employers claiming a wage increase for the poorest of the working poor would "cost jobs"; Democrats self-righteously calling out the Republicans for their cynical fealty to Corporate America.

Tough-sounding words. And make no mistake about it--big corporate interests like the right-wing Koch Brothers did fund opposition to an increase in the federal minimum wage. 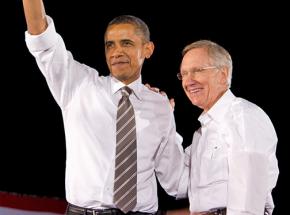 But all the grandstanding in the world won't change the fact that the Democrats hardly lifted a finger to fight for their proposal. Why? Because in Washington, there's a political advantage to making a popular proposal you know your opponents will block--an advantage for politicians, if not for working people. As Politico reported, "A failed procedural vote might pay political dividends for Democrats by creating a contrast with the GOP--but it doesn't get low-paid workers any closer to a pay bump."

This "defeat" was predictable from the start. And despite that, Democrats are pretending they did all they could in fighting the good fight. But the campaign of low-wage workers around the country demanding $15 an hour has shown that we shouldn't settle for empty rhetoric and idle promises.

BEFORE WE go on, let's pause for a lesson about the "world's greatest democracy."

That 54-42 Senate vote that defeated the minimum wage increase? That was 54 senators voting for the legislation. But because of the undemocratic procedures of the U.S. Senate, it takes a super-majority of 60 votes to get most significant bills to an official vote.

Thus, Democratic Sen. Mark Pryor knew it didn't matter what he did. Pryor--who represents Arkansas, home of low-wage retail giant Walmart, one of the senator's 10 top campaign donors--didn't even bother to show up for the vote.

The Democrats' proposal was weak on its face. It would have gradually increased the federal minimum wage, currently at $7.25 an hour, to $10.10 by 2016.

Obviously, this would be a significant increase from the current level. But if the minimum wage had done nothing more than keep up with inflation since 1968, it would be over $10.10 an hour now. And if it had kept up with the large increase in labor productivity in the U.S., as well, it would be $16.54 an hour, according to the Center for Economic Policy Research's Dean Baker.

Ralph Nader issued a radical demand for a $10 an hour minimum wage during his left-wing independent campaign for president...14 years ago!

Today, $10.10 an hour may sound good compared to the current minimum, but it wouldn't do what's necessary to lift minimum-wage workers out of poverty. Despite all the fear-mongering about going out of business, Corporate America can easily afford a much higher minimum wage. According to the Institute for Policy Studies, the unprecedented $26.7 billion that Wall Street employees pocketed in bonuses last year could cover the cost of more than doubling the wages of the more than 1 million full-time workers who survive on the federal minimum wage.

But all of that is beside the point. The Democrats went into this minimum-wage "fight" knowing they would lose--but hoping they would gain some political capital by pretending to take a stand. As the Washington Post's Wesley Lowery wrote:

Last month, Democrats did essentially the same thing for the Paycheck Fairness bill, which aimed to cut down on disparities in pay between men and women. There was news conference after news conference on Capitol Hill, impassioned speeches from the Senate floor, and Democratic women lawmakers even started walking around wearing necklaces made of Payday candy bars.

And it was all for nothing. The bill couldn't pass. And it didn't.

As Lowery concludes, the "noise about policy" made by congressional Democrats and Republicans is really about positioning the two parties for the 2014 midterm elections in November.

This isn't anything new. Bill Clinton used the promise that he would raise the minimum wage to get elected in 1992--but once in office, he ignored the whole question during the two years that Democrats controlled both houses of Congress. Then, after Republicans took over following the 1994 "Republican Revolution" election, Clinton and the Democrats rediscovered the minimum wage issue and championed a watered-down increase--just in time to help bring unions on board for the 1996 and 1998 elections.

When Obama began campaigning for president in 2007, he promised he would make raising the minimum wage a top priority of his administration. Now congressional Democrats are finally taking it up--six years later. They've lost for now, but you can be sure the minimum wage proposal will be back again--closer to the election, when a vote could "create a contrast" with the Republicans.

THE REAL contrast is between the Democrats' play-acting and the consequences of a sub-minimum wage for the working poor. But if the minimum wage is a part of the national discussion at all, even as the subject of political maneuvering by Democrats, it's because of the grassroots activism of low-wage workers.

The Fight for 15 campaign, embracing workers in fast-food and retail along with community activists, has put the need for a living wage in the spotlight--by letting workers themselves tell their stories of scrambling to get by while working for some of the richest companies in the world.

In Seattle, the Fight for 15 protests and strikes by low-wage workers fed into a vibrant campaign by Socialist Alternative member Kshama Sawant for a seat on the City Council. Faced with this pressure, the two candidates for Seattle mayor--both mainstream Democrats--also said they supported a $15 an hour minimum wage.

Now, the candidate who won, Ed Murray, claims he's come up with a proposal to make the Fight for 15 a reality.

The proposal--put together by Murray's Income Inequality Advisory Committee, which includes local business leaders as well as union representatives--would create a two-tiered structure, under which the minimum wage at companies with more than 500 workers would reach $15 an hour by 2017, while the rest would get until 2021, and even longer under some conditions. The proposal makes additional concessions to employers that have health insurance for employees.

The 15 Now campaign, supported by Sawant, rejects Murray's proposal as watered-down and is pushing for a ballot initiative with a shorter phase-in and fewer conditions. Its proposal must now gather enough signatures to make the November ballot--and it will face an uphill battle against the propaganda of the Seattle business elite, alongside the Democratic establishment.

Still, the fact that Seattle's Democratic mayor and City Council members are debating how to get to $15 an hour is the result of the grassroots upsurge of low-wage workers' organizing and the Sawant campaign.

Barack Obama and the national leaders of the Democratic Party believe they can funnel the aspirations for a living wage into the November elections, along with tame legislative proposals they don't expect to pass anyway. The Democrats will try to get by with doing as little as possible--unless they're forced to do otherwise.

That's why the Fight for 15 still belongs in the streets and our workplaces--until we win a fair wage for all workers.