The empire of hypocrisy

Those who care about peace and justice needs to challenge the lies of the war machine.

"WHEN MANY thousands of innocent civilians are faced with the danger of being wiped out, and we have the capacity to do something about it, we will take action."

Those were the words of Barack Obama speaking on August 7 to justify air strikes in Iraq. The statement was characteristic of the rhetoric always rolled out to defend U.S. military intervention--a self-serving story about America's noble commitment to human rights, the liberation of the oppressed, the goals of freedom and democracy.

This time, though, Obama voiced them after the world had watched in horror for a full month as the U.S.-supplied Israel Defense Forces attacked "many thousands of innocent civilians" in Gaza.

Day after day, the "world's most moral military" pounded one of the most densely populated places on Earth. Israel's "precision" strikes leveled whole neighborhoods, murdered civilians as they fled and destroyed Gaza's energy and water treatment infrastructure. UN shelters struggled to help the hundreds of thousands of Palestinians who had been told to flee their homes because their neighborhoods were about to be bombed. Then the shelters where they sought safety were bombed. 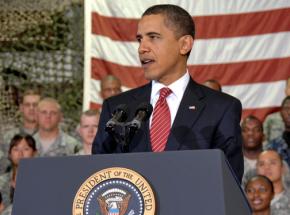 The people of Gaza have certainly been "faced with the danger of being wiped out" since Israel launched the latest stage of its colonial war on Palestine. So what "action" did Barack Obama and the U.S. government take?

In the midst of Israel's war-crimes spree, Obama gave Israel special permission to tap into a U.S. reserve of mortars, grenades and other munitions warehoused on Israeli territory to deal with "emergent" crises.

Most of the media reporting about the U.S. warplane and drone strikes in Iraq emphasizes the administration's claim that it is protecting the Yazidi religious minority, thousands of whom are stranded on Mount Sinjar and surrounded by hostile fighters from the Islamic State in Iraq and Syria (ISIS), a radical Sunni fundamentalist insurgency. Actually, most of the U.S. air strikes have taken place more than 100 miles away, where ISIS fighters are threatening Erbil, the capital of the Iraqi Kurdistan Region, a crucial part of U.S. imperial hopes of maintaining some influence over Iraq's future.

But even if you focus only on the attacks around Mount Sinjar, Washington has proven over many long years that its main concerns are its own interests. "The United States of America has no claim on the language of 'humanitarian aid' to Iraq after what it did to that country," wrote Middle East expert Juan Cole wrote. "It is rather as though Washington should send Meals Ready to Eat [provided by the U.S. Army to soldiers in the field] to the good people of Hiroshima and Nagasaki."

In the end, the main difference between the Palestinians and the Yazidis is that one group is being bombed by a U.S. ally and the other group is being menaced by a U.S. enemy. In both cases, the U.S. Empire couldn't care less about the people enduring the nightmare of war--whether it shrugs them off as "collateral damage" or champions them as "innocent civilians."

The real aim of the Obama administration is to maintain U.S. domination of the Middle East and control over the oil that lies under the ground--what was once described by the U.S. State Department as "a stupendous source of strategic power and one of the greatest material prizes in world history."

WITH THE Obama administration now openly considering the use of ground troops in Iraq, the scramble is on to assign blame for the disaster of a quarter century of U.S. military intervention in Iraq.

Obama blames the Bush administration for pursuing a "stupid" war in the first place. Republicans like Sen. John McCain blame Obama for prematurely withdrawing U.S. troops. Then there's Hillary Clinton, Obama's former secretary of state and frontrunner for the Democratic presidential nomination, who echoes the Bush administration's neoconservatives as she makes her case to be the next Hawk-in-Chief.

And all sides can agree to blame Nuri al-Maliki, the Iraqi prime minister installed in power by the U.S. during its occupation of Iraq, who the U.S. wants to dump in favor of another Shia establishment political leader to preside over a "national unity" government--though Maliki himself isn't going without a fight.

Prime Minister Maliki was the biggest source of the problem. He was more responsible than anybody else for ISIS's rise. His disenfranchisement of the Sunnis in Iraq led them to support ISIS. So moving on to a new government that can bring the Kurds, the Sunnis and the Shia together creates a real opportunity for the government to take on ISIS in full force.

There are just a few facts that get in the way of this tall tale.

First of all, Maliki was plucked from relative obscurity in 2006 and thrust into power as a creature of the U.S. occupation. A New Yorker article by Dexter Filkins describes how the U.S. Ambassador to Iraq Zalmay Khalilzad stunned Maliki with the proposal that he become prime minister--but Maliki eventually came around, and Washington pulled the strings to get him installed in office.

Maliki was chosen as a secular-minded Shia who the Bush administration believed would preside over the policies set in motion by the occupation. One of those policies, underway from the very first months of the occupation, was "de-Baathification": the criminalization of the Baath Party that had ruled Iraq under Saddam Hussein.

Most of the 2 million members of the Baath Party were Sunnis, and the vast majority had joined not out of any political convictions, but because this was the only way to advance in Saddam Hussein's Iraq. Thus, the first "disenfranchisement of the Sunnis" in Iraq took place under the U.S. occupation--Maliki was the inheritor of these policies.

As for the "bringing the Kurds, the Sunnis and the Shia together," the three-way war between these groups was also set in motion by the U.S., with the explicit goal of "divide and rule" against the threat of a united resistance.

Baghdad underwent an ethnic cleansing of its Sunni Arabs, with the proportion likely falling from 45 percent of the city to 15 percent or so of the city. The "Islamic State" push on the capital in concert with other Sunni Arabs is an attempt to recover what was taken from them by the Bush administration. The U.S. was the proximate cause of a civil war in 2006-2007 in which at some points as many as 3,000 people were being killed each month.

Once he became prime minister, Maliki played his part in stoking the civil war--making sure the new Iraqi security forces were highly sectarian, constructed out of Shia militia forces.

But he was merely continuing a policy set in motion by the U.S. occupiers. The ISIS-led offensive across northern and western Iraq is the grim consequence of these policies--of the Sunni population, as Cole says, trying "to recover what was taken from them by the Bush administration" and its puppet Maliki.

Parents should take this moment to ask what else they can do to shield our children from violent images and experiences that warp young perceptions and obscure the consequences of violence, to show our children, by the power of our own example, how to resolve conflicts peacefully.

At the very same moment, Clinton was ordering NATO air strikes against Serbian forces in what was then Yugoslavia. Clinton showed no more awareness of the glaring contradictions of his rhetoric than Barack Obama does today.

There's a reason why political leaders are so desensitized to their hypocrisy--double standards are woven into the very fabric of imperialism. Violence is legitimate when our leaders say it is, but it's terrorism when they say it isn't. It's "immoral" to kill in times of peace, but a sacred duty to kill during war. It's unacceptable for protesters to use anything but nonviolence, even when they are mistreated by police. But any police officer can shoot to kill if they feel "threatened."

"The ruling class," wrote Russian revolutionary Leon Trotsky in his book Their Morals and Ours, "forces its ends upon society and habituates it to considering all those means which contradict its ends as immoral. That is the chief function of official morality."

Israel is a U.S. ally, so its violence, no matter how savage, is deemed to be "legitimate self-defense," while the violence of the Gaza resistance is "terrorism." But what's missing here is the context in which the violence takes place: Israel is the occupier, and the Palestinians are the occupied.

Israel has used horrific violence over the course of generations--first by means of terrorist militias and later with weaponry provided by U.S. taxpayers--to drive hundreds of thousands of Palestinians from Palestine. Some ended up in refugee camps, others resettled in Gaza or the West Bank, and still others ended up as strangers in their own land, second-class citizens inside apartheid Israel.

When the U.S. Senate voted 100-to-0 to stand with Israel during its bombing of Gaza, it condemned "unprovoked rocket fire at Israel" and called on Hamas "to immediately cease all rocket and other attacks against Israel." But the Senate didn't utter a word about Israel's use of the world's most sophisticated weapons against Gaza. Or Israel's deliberate efforts to impose malnutrition on 1.8 million people. Or the siege that has kept consumer goods, construction materials and even blank paper from reaching Gaza's schools.

If U.S. goals had anything to do with "humanitarianism," the Pentagon would impose a no-fly zone on Israel and airlift desperately needed aid to the shell-shocked population of Gaza--like basic medical supplies missing from the hospitals, or earth-moving equipment to recover the remains of lost family members and begin the long work of clearing the ruins and building anew.

But the U.S. supports Israel--and Israel repays that support by serving as a praetorian guard for U.S. interests in the region. And so the war on Palestine continues, with rhetoric claiming that the U.S. and Israel are concerned with safety and security.

They are not. The world's main superpower and its devoted ally in the Middle East are making the world more deadly and dangerous all the time. Anyone who cares about peace and justice must challenge the hypocrisy and lies--and stand against a war machine that continues to pile up the victims, from Gaza to Iraq and beyond.