Why isn’t UPS on trial?

Joe Allen tries to answer the questions left in the aftermath of workplace violence.

KERRY JOE TESNEY--a 45-year-old, 21-year veteran of United Parcel Service (UPS), known as Joe to his friends and family--shot and killed two supervisors and then himself at a UPS facility in Inglenook, Ala., near Birmingham, on September 23. UPS had fired Tesney, a package car driver, during the past month, and he received "his final papers on Monday," according a police spokesperson.

Tesney leaves behind a wife and two daughters. His mother-in-law Wanda Binney told the media, "He was one of the best men I have ever known." Asked whether anyone could have predicted this violent act, Binney responded: "Anybody but Joe. He's never hurt anyone in his life."

Tesney was an active member of the North Park Baptist Church since 2003. His pastor Bill Wilks told ABC News that Tesney had been "troubled" over his work. "I think it's been an ongoing situation," Wilks explained. "In his own spirit, he's been troubled, and he's asked for prayer about that."

What Joe Tesney's "trouble" at work was and why it was an "ongoing situation" is unknown to the public. So far, UPS has not announced why it fired Tesney. No one from the Teamsters local that represents UPS drivers and package handlers at the Inglenook facility has made any statements to the media either. 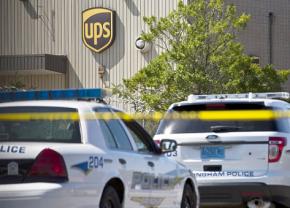 The Inglenook murders and suicide come as UPS has gone on a media blitz and hiring frenzy to reassure its tens of millions of customers that there won't be a repeat of last year's Christmas and post-Christmas delivery fiasco. Now, the company may face greater public scrutiny over working conditions for its drivers and violence at its facilities across the country, even before the high-pressure Christmas season begins.

The big question is simple: How does someone like Joe Tesney, a loving husband and father, come to kill two supervisors and himself? If the site of the killings shows the prime reason Tesney was "troubled," then what is it about working at UPS that could do this?

The circumstantial evidence, of course, points to Tesney's firing as the decisive moment. The loss of a high-paying, blue-collar job like a UPS package car driver in a right-to-work state like Alabama would have meant financial doom for him. So why was he fired?

On the day of the shooting, Callans had made a quick stop at the Inglenook UPS facility, but was not schedule to work because he was on vacation. Hutcheson was a 15-year veteran of UPS, and was married with twin 4-year-old sons. "He was the greatest person you ever met,'' friend Bryant Hall told AL.com.

The Alabama news website when on to report that "Hutcheson was on vacation [previously] when Tesney was fired, but had investigated alleged wrongdoing by Tesney in the past and had recommended his firing, friends said."

What "wrongdoing" was the article referring to? Several media outlets reported that Tesney and UPS had been sued in civil court over alleged theft or negligent handling of an experimental racing radiator from HESCO, a design and testing shop, in November 2010. Tesney stated that he mistakenly picked up the radiator during a stop at the company to pick up packages. In September 2013, Jefferson County District Court Judge Jack Lowther ruled in favor of Tesney and UPS.

That should have ended the issue for Tesney. But did it?

I talked to several former UPS union representatives and stewards at UPS, and they suspect, based on their experiences, that this would have been a turning point in Tesney's relationship with the company. "They put him on the 'least best' or 'shit list' waiting for the opportunity to fire him, while subjecting him to constant auditing and other forms of harassment," one former union rep said.

A former union steward agreed: "I'll be you that [Tesney's supervisors] kept muttering under their breath, 'You see that guy, he's the one that cost us that account,'" the steward said.

Is this the "ongoing situation" that Tesney talked to his pastor about?

THIS HORRIBLE incident shouldn't be reduced to a fraught relationship between one UPS supervisor and one package car driver. UPS is known as "Big Brown" not only because it's a ruthless competitor in the shipping business, but because of its machine-like way of grinding down its workforce.

The global shipping behemoth is notorious for brutal working conditions and militaristic, if not cult-like management and discipline. One former chair of UPS described the corporations management style "as a cross between the Marine Corps and the Quakers." The mindset is clear from an internal company document obtained in 1976 by UPSurge, the rank-and-file movement of UPS Teamsters that organized a strong workplace resistance--the document was called "How to Get a Discharge for Low Productivity Sustained."

UPS has had four more decades to further perfect their methods of harassment and intimidation. In the 1980s, UPS ran television commercials boasting that UPS was the "Tightest ship in the shipping business." In response, many UPSers mocked this commercial with posters showing that the "ship" was a slave ship--or they changed the abbreviation of UPS to "Under Paid Slaves."

In 1997, a study of stress among package car drivers published in the American Journal of Industrial Medicine reported:

The drivers complained of a punitive attitude from front-line supervisors, daily supervisory pressure to work more hours and through lunch, stressful supervisory pressure in the trucks on their routes, and pressure on replacement drivers to outperform those on sick leave or vacation. They reported conflicting expectations emanating from differing supervisors and a disciplinary system in which they were "judged guilty, and sentenced before trial." Finally, the drivers reported a stressful social environment at work fostered by a perceived lack of social support from supervisory personnel.

In the two decades since that study, thing have gotten worse. I worked at UPS for eight years in a variety of jobs. My last year was spent as a package car driver, the most stressful job I have ever had. As a union steward, I vividly remember one UPS manager who boastfully told me how he was going to "whack some drivers" over some minor recording issues.

And UPS is certainly not the only corporation where intense pressure and arbitrary discipline sometime lead to violence. In his 2005 book Going Postal: Rage, Murder, and Rebellion: From Reagan's Workplaces to Clinton's Columbine and Beyond, Mark Ames explains the phenomenon of workplace revenge killings as a product of the revolution in labor relations begun during the Ronald Reagan presidency in the 1980s, resulting in outright union-busting and the whittling away of workers' rights.

ANOTHER HISTORICAL period came to mind after I heard about the killings in Inglenook--because of the parallels between Tesney's case and that of autoworker James Johnson.

On July 15, 1970, Johnson, an African American, walked into Chrysler Corp.'s Eldon Avenue Gear and Axle plant, where he had been told earlier that day that he was fired. Hidden in his overalls was an M-1 carbine rifle. Soon after entering, he spotted one of the foremen who had fired him. Johnson took out the M-1 and shot one white foreman, one Black foreman and a white autoworker, killing all three.

The Eldon plant was run down and dangerous, and the scene of many wildcat strikes over working conditions. In the year leading to Johnson's shooting rampage, two workers had died in on-the-job accidents in a single two-week period.

In their classic book Detroit: I Do Mind Dying, Dan Georgakas and Marvin Surkin described Johnson: "He was one of those thousands of anonymous workers who spoke little and laughed less. He did not drink in the bars near the factory, and he was not a ladies man. James Johnson was a Bible reader, and his biggest source of pride was the small house he was buying for himself and his sister."

Johnson was a quiet man with modest goals in life. When Chrysler took away his livelihood and future, his world collapsed, and he was driven into a murderous rage. Who was to blame for this? James Johnson or Chrysler?

At first, many of Johnson's co-workers were simply stunned by what happened. But sympathy for him grew as his story and the many struggles at Eldon began to be made public. "Workers learned that he had received a suspension the morning of the shooting after he had refused to participate in a work speed-up," according to Georgakas and Surkin. "Later, Eldon workers learned of other disputes involving lost pay and lost vacation time in which Johnson had been treated unfairly."

Kenneth Cockrel, a radical attorney who had taken on and won difficult police brutality cases, came forward to defend Johnson. Cockrel was also a member of the seven-member executive committee of the League of Revolutionary Black Workers, which had become well known for leading jobs actions over the very working conditions that drove Johnson to murder.

Cockrel's strategy was to put Chrysler on trial, repeating the words: "Chrysler pulled the trigger." Cockrel was also able to ensure that Johnson truly did have a "jury of his peers."--it was racially integrated, and included two autoworkers and three women whose husbands were autoworkers.

Johnson's "attorney presented evidence that Elson was one of the most dangerous plants in the United States and the UAW was unable or unwilling to protect workers on the shop floor," wrote Georgakas and Surkin. "As a climax to the defense, Cockrel took the entire jury to the scene of the crime so they could judge conditions for themselves."

The jury found James Johnson not responsible for his actions. The visibly angry judge tried to undermine the verdict by remanding Johnson to a state mental hospital--but Johnson eventually went free.

THERE ARE obvious differences between James Johnson and Joe Tesney. For example, Johnson was Black, and racism was an important factor in his case, and Tesney is white. But until Monday morning, September 23, Joe Tesney, like Johnson, was one of millions of anonymous blue-collar workers who "spoke little and laughed less." Life at work was filled with pressure and intimidation, and he had been told he was fired--just like Johnson.

There will be no trial of Joe Tesney. He will not get to speak for himself or have defense attorneys or psychiatrists to advocate for him. His only "trial" is likely to take place in the media, with UPS trying to turn him into a deranged, isolated killer, who the company misguidedly kept on their payroll for too long. The families of Brian Callans and Doug Hutcheson will have a hard time getting to the truth if they choose to learn more about what happened--because UPS will try to smother it all under a big brown blanket, to ensure that no one takes a deeper look at its workplace culture.

UPS made $27 billion in revenue and over $4 billion in profits last year, despite the fiasco during the Christmas season. It did so by pushing its workers beyond all reasonable mental and physical limits.

The deaths in Inglenook are a reminder of the toxic working conditions at UPS and the damage inflicted on working class people when they lose their livelihoods. Whether you believe that UPS "pulled the trigger" or not, maybe it's time that Big Brown was put on trial. It has a lot to answer for.

Thanks to Anne Mackie for discussing this article.