What class is and isn’t

Danny Katch explains what Marxists mean when we talk about social class--and why our tradition looks to the working-class majority to change society.

LAST YEAR, workers for the Bay Area Rapid Transit (BART) system went on strike, disrupting the daily commute for employees of some of San Francisco companies like Google and Twitter.

Tech executives who normally promote themselves as rebellious "disruptors" of old economic models were furious that they themselves had been disrupted by what they considered the most outdated economic model of them all--a labor union.

Like all capitalists, but perhaps even more so because of the sheen of the "new economy," Bay Area bosses prefer to imagine that there are no classes, only individuals--a few of whom happen to be better than everyone else at buying and selling goods and labor in the metaphorical land known as the free market.

Like all job actions, but perhaps even more so coming in the heart of the "new economy," the BART strike punctured that fantasy by reminding our Captains of Digital Industry that the working class continues to exist--and worse still, it does so not as an unfortunate object of pity, but as a potentially dangerous force with its own unique form of power. 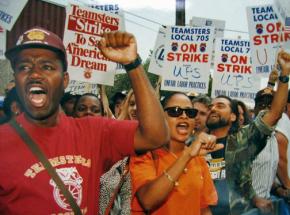 Until the Occupy Wall Street movement and its talk about the 1 Percent, class was practically a nonexistent topic of public conversation. Even today, almost every time the word is uttered on major media channels, it comes after "middle." Everyone in the United States is supposedly middle class, whether we make $25,000 a year or $250,000. It's unpatriotic to let ourselves be divided by one extra zero.

In the national mythology, one small segment of society is rich, and a slightly larger one is poor. The media almost always illustrates this latter group with pictures of African Americans, thus subtly transforming even the few nominal discussion we have about class into coded ones about race.

That leaves everybody else in the middle class, a useless definition for understanding class, but an effective one for disguising it: The episodes of class conflict that take place every day--between manager and managed, landlord and landlorded over, etc.--become just so many millions of random personality beefs.

For what it's worth, if you divide the U.S. into three categories based on income, the bottom third would make less than $30,000 a year and the top third would make over $50,000. But this doesn't come close to the full meaning of class, which is about much more than money.

Throughout history, classes have been defined by their economic function. Peasants, merchants, landowners, slaves, craftspeople: these categories tell us something about how much people had, but they tell us much more about the specific roles they played in their societies' continuation and prosperity, or lack thereof.

This is still the most useful way to understand class, although it's understandable why many tech bosses would rather not. As one memorable tweet during the BART strike put it: "'Can you believe the salary these BART guys get to drive a train?'"--sent by someone whose job is to make Internet ads more clickable.

IN THE Marxist view, capitalism has three main classes: capitalists who own the means of production, workers who sell their labor power to those owners, and a middle class of managers, professionals, small business owners and others, whose function combines aspects of both bosses and workers, in differing proportions depending on the occupation.

Capitalists make up the most powerful class, of course, even though they are far and away the smallest. They have insider access to all levels of government and can determine the fate of entire cities when they open or close a factory.

But they are far from infallible. Capitalists are hobbled by the tunnel vision required by the profit system, which can lead them to make decisions reminiscent of children who only understand immediate gratification: pay lower taxes today even if there will be no money to pay for the roads and bridges their employees need to get to work tomorrow.

From our point of view down below, the capitalist class seems to be in complete control. In fact, they often lurch blindly through successive crises--from the disastrous invasions of Iraq and Afghanistan, to the global financial meltdown caused by crooked banks, to the ongoing catastrophe of climate change. Ultimately, though, capitalists find solutions to their crises--at the expense of everyone else, which is why it is urgent to create a new system in which they aren't in charge.

When many people mention the working class these days, they often simply mean people who don't have much money. This defines workers by what we lack rather than what we possess, which is power--or at least the potential for power.

When workers sell their labor, they are put to work in large, complex organizations--factories, offices, hospitals, transportation networks and so on--which they operate collectively. This complex division of labor allows relatively small groups of workers, thanks to their high productivity, to produce or make possible huge profits. And it allows workers to jeopardize those profits by going on strike.

Some complex organizations are harder places for workers to organize themselves. Most unions were born during an era when tens of thousands of workers were concentrated in factory districts in large cities. Today, many factories have been moved to isolated rural areas, at least in the U.S.

And workers are figuring out how to organize themselves in companies with decentralized structures--like the fast-food behemoths with thousands of small franchises or the tech giants that rely on temp labor and independent contractors. But figuring it out, they are, as strikes at McDonalds, Amazon and, most recently, Uber demonstrate.

The paradox of working-class power is that it originates in the fact that as individuals, workers are powerless. We sell our labor to a boss because we don't have a choice, not because we enjoy giving up our autonomy for eight to 10 hours a day. As sociologist Erik Olin Wright explained, workers only exist as a class because they or their ancestors have been robbed of the land and wealth that would allow them to survive independently. It is this individual powerlessness that compels workers to organize collectively.

As for the middle class...just as historians coined the term "Middle Ages" to describe the era in Europe between the Roman Empire and the Renaissance, the middle class is more defined by the two classes between which it is squeezed.

"What is the middle class in the middle of?" asks Michael Zweig in The Working Class Majority. "If we answer this question in terms of power instead of income, we see that the middle class is in between the two great social forces in modern society, the working class and the capitalist class."

The middle class typically combines some of the functions of capitalists and workers. "The independent peasant or handicraftsman is cut up into two persons," writes Karl Marx in Capital. "As owner of the means of production he is capitalist; as laborer he is his own wage-laborer."

Because the middle class embodies the battle between owners and workers, its instinct is often to call on both sides to stop fighting. Without the individual power of capitalists or the collective power of workers, the middle class thinks that it represents the entire society--as opposed to "special interests" like the workers and their unions, even though they are the actual majority in society, and the big capitalists.

But because the middle class can't produce an alternative to capitalism that really would give everyone an equal voice, its calls for unity end up being window dressing for the status quo. Many political campaigns feature two candidates from middle-class backgrounds promising that they will do more for the middle class. Peek behind the curtain, however, and you will usually find capitalists funding the campaigns and drafting the platforms.

THE WORKING class, by contrast, has the potential to create a different society. This potential begins from the fact that workers have to do their jobs collectively, which also means that their resistance tends to be collective. One cashier who wants a longer lunch break doesn't have much leverage, because she can be replaced easily. But management will have a harder time ignoring the demands of all the cashiers if they all return to work after lunch later than they were supposed to.

This collective organization continues at higher levels of resistance: When workers take over a supermarket, they can't divide it up into individual aisles the way peasants would divide a feudal estate into individual plots of land. Instead, workers have to run the operation together, as already they do at the over 400 businesses in the U.S. that are owned and run by workers.

The essence of socialism is that workers can use this collective organization that they have learned under capitalism to create an cooperative economy geared to meet humanity's needs instead of a competitive one geared to maximize profit.

Of course, it's not that easy. Workers are taught from birth that their societal role is to follow the orders of others, and that their degradation under capitalism is their own fault. Teachers are reduced to being mere test-administrators--and then superheroes who if their students score above average. Women are blamed at work for needing time off for their families and blamed in the media for neglecting their families to go to work. Black men suffer skyrocketing rates of unemployment and are then demonized for not being the family breadwinner.

Today, the idea of the working class running society might seem remote. But each time workers show their power in a strike or job action, they demonstrate that socialism remains a possibility.

The goal of socialists today is to build on these scattered examples to help the working class build its own independent organizations and leaders. The starting point is understanding that class means a lot more than what's in your paycheck.