Their answer is repression and Islamophobia

Todd Chretien reports on the crackdown across Europe after the killings in Paris.

IN THE aftermath of the attacks by three men on Charlie Hedbo and a Jewish market in Paris, European governments, mainstream political parties and anti-immigrant organizations have ratcheted up an atmosphere of racism and Islamophobia not seen since the French-Algerian war.

Days after the January 7 attack in Paris, Valls demanded reauthorization of France's participation in the U.S.-led air war against Islamic State in Iraq and Syria (ISIS)--though it was the Yemen-based al-Qaeda in the Arabian Peninsula, and not ISIS, which claimed responsibility for directing the Charlie Hebdo murders. Regardless, the French National Assembly quickly obliged Valls, voting 488-1 in favor--with the Senate following suit later that day in a 327-0 vote. 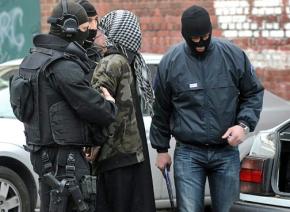 France also maintains 4,000 troops in Mali, Mauritania, Burkina Faso, Niger, Chad and other countries--countries that were part of France's vast north and west African empire until the early 1960s.

In Belgium, in the city of Verviers, police shot and killed two Belgian nationals who the government claims were part of a terrorist cell. Afterward, paratroopers were ordered into the streets to guard Jewish educational and cultural sites.

In the German city of Dresden, 25,000 people rallied on January 12 under the banner of PEGIDA (Patriotic Europeans Against the Islamization of the West). The anti-immigrant group has been holding weekly demonstrations in German cities since November, but recently established chapters in Bulgaria, Austria, Italy, Norway, Denmark and the Netherlands.

In France itself, dozens of mosques have been the target of attacks, ranging from vandalism to gunfire and firebombs. Hundreds of individual Muslims have reported harassment and assaults.

And despite Valls' promise not to confuse Islam in general from "jihadism and radical Islam"--not to mention the government's repeated invoking of the principle of freedom of expression following the Charlie Hebdo attacks--the Socialist Party government led by Valls and President François Hollande is engaged in a vicious Islamophobic campaign.

Last week, Hollande ordered coordinated arrests that netted 54 people who the government accuses of "inciting terrorism." The arrests were designed to make a simple point to the white population of France: Your enemies are Muslims.

Education Minister Najat Vallaud-Belkacem further burnished the government's tough-on-Islam credentials by ordering all public schools to enforce a minute of silence to pay respect to those killed during the attacks in Paris. When hundreds of students across the country protested this directive--or merely expressed their disagreement with Charlie Hebdo's Islamophobic cartoons--the Vallaud-Belkacem ordered police to investigate them and denounced them on the floor of the National Assembly:

[W]e've all heard the "Yes, I am Charlie, but..." The double standard question [gets raised]: Why defend freedom of expression here and not there? These questions are intolerable, especially when they are heard in schools, which are responsible for transmitting values...This is why I mobilized the entire educational community so that we do not merely respond with words, but by taking strong actions.

ON SUNDAY, January 11, dozens of world leaders stood next to Hollande at a massive "unity" demonstration in Paris--supposedly as a show of support for freedom of expression and democracy. But as the Guardian pointed out, many of these same leaders scored miserably in Reporters Without Border's free-press rankings--including Israeli Prime Minister Benjamin Netanyahu and Egyptian Foreign Minister Sameh Shoukry.

German Chancellor Angela Merkel's presence added to the festival of hypocrisy--her full-throated support for French democracy paired uncomfortably with her conservative government's veiled threats to starve Greece if its people use their democratic rights and vote in the radical left party SYRIZA in elections set for January 25.

As if to add an exclamation point to their duplicity, the world leaders' "courageous" stand against terror was undercut by the fact that they didn't really march at all--they merely posed for a staged photograph that made it appear they were arm in arm at the head of the demonstration.

The Obama administration didn't send a representative to Paris, but wasted little time in making up for this oversight, dispatching Secretary of State John Kerry to, in his words, give France a "big hug." In a more tangible display of solidarity with the French government that had reauthorized participation in the U.S.-run war on ISIS, the Pentagon announced it was sending up to 1,000 additional U.S. troops to intervene in Iraq and Syria.

While Hollande and friends huddled in a side street for their photo op, as many as 4 million people marched in multiple locations across the country, including more than 1 million in Paris.

A volatile mix of emotions and politics led so many people into the streets. Millions of people demonstrated out of revulsion at the murder of cartoonists and journalists and the innocent victims at a kosher market. "Je Suis Charlie" (I am Charlie) signs were the most common to be found at the demonstrations.

Pierre Laurant, secretary-general of the Communist Party (CP) in France, declared that "We are all Charlie" and said the million who demonstrated wanted "to pay homage to the victims and to show their support for freedom of expression, secularism and the values of the Republic, liberty, equality and fraternity.

But this is a one-sided view at best. Many people did march on January 11 out of genuine support for freedom of expression or simple human sympathy with those killed. Yet opinion polls also showed nearly unanimous support for Hollande's call for "national unity"--at a time when it's clear "national unity" means a nation "united" against the predominantly immigrant Muslim population of France. Even worse, nearly two-thirds of people in France opposed Hollande's decision not to invite Marine Le Pen, leader of the far right National Front, to participate in the show of "national unity."

These indicators of public opinion--not to mention the wave of anti-Muslim violence since January 7--show that French nationalism today goes hand in hand with a large dose of Islamophobia.

Laurant's failure to highlight this isn't accidental. The French CP has long dodged the question of confronting racism and Islamophobia. One million Algerians died in the war against French colonialism before the country won independence in 1962. Yet the Communist Party often gave successive governments backhanded support on this issue, refusing to forthrightly support freedom for France's colonies. When Valls asked for reauthorization for France's participation in the war on ISIS, the CP abstained, rather than voting against.

BUT THERE is a courageous minority standing against the tidal wave of patriotism.

First and foremost, many Muslims and immigrants, as individuals and as members of organizations, stood up for themselves--like the students that Education Minister Vallaud-Belkacem complained about so loudly. In its statement, the Parti des Indigénes de la République (PIR) wrote: "Our minds are lucid enough to recognize the mirage of an emotional 'all together' and the political retreat this will generate."

The PIR is an example of the immigrant and Muslim organizations that grew out of the rebellions of marginalized youth and communities beginning in 2005.

Today, the number of Muslims in France from North Africa, West Africa and the Middle East numbers around 5 million. These communities have faced systematic discrimination, disproportionate unemployment and constant harassment by police. Similar to African Americans in the U.S., Muslims account for more than 60 percent of prisoners in France, though they make up only about 12 percent of the population.

To its great credit, the main organization of the French revolutionary left, the New Anti-Capitalist Party (NPA), spoke out clearly against the tide of bigotry that followed the January 7 killings, and refused to march four days later behind Hollande and all the other "butchers of the world," as they called Merkel, Netanyahu and company.

But the NPA's attitude remains a small minority in France. This is a direct result of the behavior of France's mainstream parties, the Socialist Party and the center-right parties that were the base for former President Nicolas Sarkozy. Far from challenging Islamophobia, they have more and more adapted to the National Front's anti-immigrant racism.

In last year's elections for European parliament, the fascists won the popular vote, ending up with one-third of the country's seats. Two years earlier, Marine Le Pen came in a close third in presidential elections, narrowly squeezed out of the run-off vote to decide the office.

Meanwhile, Europe appears to be sliding once again into recession, which will only exacerbate unemployment and economic suffering, in a country where joblessness has remained above 8 percent for decades and currently sits at just under 10 percent, with youth unemployment at almost 25 percent.

As happened in the U.S. following the September 11, 2001, attacks in New York City and Washington, D.C., the killings in Paris--carried out in the name of a brand of militant Islam that is utterly reactionary--will be used by the politicians to justify not only greater repression, but new austerity measures in the name of national unity and shared sacrifice.

At the end of the month, the French National Assembly will consider an economic package dubbed "Macron's Law"--after Socialist Party neoliberal wunderkind Emmanual Macron--which aims eliminate job protections and deregulate and privatize sections of the economy.

Unions, student organizations, community groups and the revolutionary left had long planned campaigns to oppose these cuts. How much they will be disrupted now by the patriotic fervor in the wake of the Charlie Hebdo attacks remains to be seen. But whatever happens, this toxic mixture of austerity, war, Islamophobia and racism--all carried out in the name of peace and democracy--will sound familiar to those fighting for social justice in the U.S.

That underlines the importance of building international solidarity between all those fighting racism, austerity and violence across Europe, North Africa, the Middle East and the United States.