Who’s being attacked in Ferguson?

Nicole Colson reports on the blame game that is being played after the shooting of two police officers in Ferguson, Missouri.

OFFICIALS IN Ferguson, Missouri, announced the arrest of a 20-year-old man, Jeffrey Williams, on charges of first-degree assault in the shooting of two police officers on March 12.

The shooting came after midnight, toward the end of a protest outside the Ferguson police station to mark the resignation of Ferguson Police Chief Thomas Jackson. One officer was shot in the shoulder and one in the face--both were released from the hospital the next morning.

Calls for Jackson to step down have been ongoing since the killing of unarmed Black teenager Mike Brown last summer sparked a movement in Ferguson that confronted police day and night for weeks, and that later spread around the country. A U.S. Justice Department report released earlier this month detailed the widespread, systemic racism of Ferguson police that has come to light since Brown's murder.

Though its findings disappeared from the headlines when the two officers were shot, the report found that while Blacks are 67 percent of Ferguson's population, they accounted for 93 percent of all arrests between 2012 and 2014. Police were also disproportionately likely to use force against African Americans during arrests and other actions. 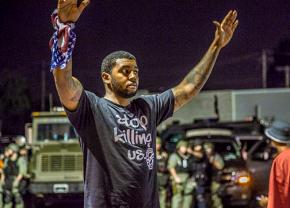 Not only that, but the city relied on Ferguson police to generate revenue. As the Washington Post reported, "The investigation found that Ferguson officers competed to see who could issue the largest number of citations during a single stop, and in one instance, that total rose to 14. Even minor code violations sometimes resulted in multiple arrests, jail time and payments that far exceeded the cost of the original ticket."

To top it off, the Feds released racist e-mails written by multiple Ferguson police officers and other city officials. One joked that a Black woman could help stop crime by having an abortion. Another said that Obama wouldn't be president for long, because "what black man holds a steady job for four years?"

THIS WAS the context for protesters to gather outside the Ferguson police station on the evening of March 11 and into the early hours of March 12, when the shooting took place.

According to demonstrators, though it was clear that the gunshots came from some distance, police immediately trained their weapons on peaceful, unarmed protesters in front of them. "The police knew where it came from, but they still had guns on protesters for a long time after," Heather De Mian, who recorded video footage of the protest and shooting, told Britain's Guardian.

In announcing Jeffrey Williams' arrest, Robert McCulloch, the prosecuting attorney for St. Louis County--the same man responsible for the non-indictment of officer Darren Wilson for the killing of Mike Brown--went out of his way to claim Williams was a part of the protests against Ferguson police. "He is a demonstrator," McCulloch said. "He was out there earlier that evening as part of the demonstration. He's been out there on other occasions, part of the demonstrations."

However, activists dispute McCulloch's assertion. DeRay McKesson, who has been documenting Ferguson protests on social media for months, wrote on Twitter: "No, I cannot recall ever seeing the suspected shooter, Jeffrey Williams, at any protests, including the night in question."

Even McCulloch finally was forced to say, "It was possible [Williams] was firing shots at someone other than the police, but struck the police officers." In fact, the gunshots are estimated to have come from as far away as 125 yards--well beyond where protesters were standing on the night of the shooting. And as McCulloch admitted to reporters, Williams had said he had a dispute with some people who were in front of police headquarters, "which had nothing to do with the demonstrations that were going on."

If Williams was indeed the shooter, and if he was hoping to strike a blow against racist violence by firing at Ferguson police, he accomplished exactly the opposite. The shooting has given authorities and the media a perfect excuse for a crackdown and to focus on the supposed "lawlessness of Ferguson"--while turning the spotlight away from the reality of police brutality and racism.

The entire experience of the Black Lives Matter movement since it erupted last summer after Mike Brown's murder has been toward mass action for justice, not individualistic acts aimed at revenge that actually accomplish the opposite.

But it must be said that time may yet prove that the shooting of the two officers had no connection at all to the protests against the murder of Mike Brown and the racism of Ferguson officials.

McCULLOCH WASN'T alone in jumping to conclusions about the shootings. U.S. Attorney General Eric Holder, fresh from issuing his department's damning report on the Ferguson police, rushed to denounce the shooter as a "damn punk...who was trying to sow discord in an area that is trying to get its act together and trying to bring together a community that has been fractured for too long."

Mike Brown's family was among the many opponents of police violence who immediately condemned the shooting. But that didn't stop the right wing from trying to smear the movement for justice.

On Fox News, Sean Hannity responded to one protester's description of the climate in Ferguson by saying that Brown's death was his own fault, for supposedly having robbed a convenience store and tried to grab Darren Wilson's gun. "I think the story here is you shouldn't act that way and people shouldn't be shooting cops," said Hannity.

Bill O'Reilly declared that the police shooting was "a calculated ambush by anarchists, people who want to create violent situations inside the USA." Lou Dobbs, meanwhile, insisted that many people "deserve considerable blame for fomenting an environment like this in which this can occur, chief among those in my opinion is the President of the United States and the Attorney General, and the way in which they have handled this community's crisis."

Of course, all this blaming shifted the focus from the Justice Department report that exposed the structural racism at play in the killing of Mike Brown and the many others who have died at the hands of police in communities across the country.

Like in New York City last December, when a mentally disturbed man killed two police officers, those on the right are using the latest incident to pressure the Black Lives Matter movement to stop its protests because they supposedly put cops' lives at risk.

But how great is the risk that police actually face? In reality, cops don't even make it into the top 10 of the most dangerous jobs in the U.S., according to the Bureau of Labor Statistics. Construction workers, farmers and loggers, to name a few, have far more dangerous jobs in terms of lives lost each year.

So far this year, according to the "Officer Down Memorial Page," 24 police officers have died in the U.S. But most of those deaths weren't the result of violence on the job. Three officers died as a result of gunfire, according to this website, while eight died as result of automobile accidents and seven from heart attacks. Two died from illnesses related to the September 11 attacks.

Even if you take the total number, it doesn't even compare to the number of people killed by police. The "Killed By Police" website has logged a total of 224 people killed by cops so far this year.

In other words, civilians are far more likely to be killed by police than police are to be killed by civilians--but you'd never know it from the pundits blaming the Black Lives Matter movement for the shooting of police in Ferguson and New York City.

The Black Lives Matter movement is guilty of nothing other than challenging police violence and the racist injustice system. We can't let the backlash after the shooting of two Ferguson officers divert this struggle from fighting for justice for all of the Mike Browns whose lives are taken by police in cities across the U.S.