Are the war makers offering a real peace?

The media's obsessive focus on Iran's nuclear program obscures the real culprit in the rising spiral of conflict and chaos across the Middle East.

THE OBAMA administration is celebrating the framework nuclear deal with Iran signed in Switzerland in early April as the start of a new era in international relations.

In the U.S., the mainstream media has extensively covered the White House's heralding of the agreement as the "most robust and intrusive inspections and transparency regime ever negotiated for any nuclear program in history"--one that will "cut off every pathway that Iran could take to develop a nuclear weapon."

Predictably, in all the ink spilled about the agreement, no one questioned the right of the U.S. government, which has killed untold hundreds of thousands of people in the Middle East in the last decade alone, to decide the nature of the military arsenal possessed by the nation the U.S. identifies as its main rival in the region.

Iran's Foreign Minister Mohammad Javad Zarif is celebrating the outcome as a victory that will bring an end to the sanctions which have crippled Iran's economy, without Iran having to shut down any of its nuclear facilities. 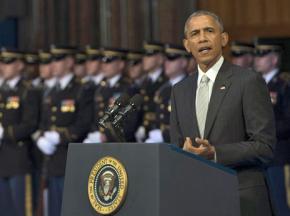 Republicans in the U.S. have forged an alliance of convenience with Israeli Prime Minister Benjamin Netanyahu. The GOP wants to thwart any positive accomplishment that Obama might lay claim to, while Netanyahu seeks to undermine any agreement in the hopes of making military action against Iran more likely. The Republicans and Netanyahu, of course, agree that Obama's "surrender" to Iran has ushered in a more dangerous and crisis-prone period in the Middle East.

In this case, the Republicans are right about the end of that statement, but for the wrong reasons. This is an increasingly dangerous moment, but not because of Iran's nuclear ambitions.

The main source of the metastasizing crises in the Middle East is the disastrous intervention of the world's imperial powers to accomplish the triple aims of controlling the region's oil wealth, containing the threat from Islamist political forces and undermining any possible reemergence of the Arab uprisings that first shook the region in 2011.

THE NEGOTIATIONS over Iran's nuclear program took place under the auspices of six powers: the five permanent members of the UN Security Council--China, France, Russia, Britain and the U.S.--plus Germany.

The consensus that served as the starting point of the negotiations is that Iran is a "pariah nation" for its "sponsorship of international terrorism," its refusal to recognize Israel and its drive to develop a nuclear arsenal. But as investigate journalist Gareth Porter pointed out, "[T]hat narrative weaves together false history and falsified evidence, which have been used to create and sustain a 'manufactured crisis' over Iran's nuclear program."

Porter has written a book documenting how Iran's supposed pursuit of a nuclear bomb has sustained a useful fiction of Iran as the "intractable enemy," in order to justify continued massive U.S. military spending following the Cold War.

But even more to the point, why is it that the U.S., the world's leading military power, should have even a shred of legitimacy in dictating the kind of arsenal that Iran should be allowed to have?

Any of the accusations against Iran apply with even more validity to the U.S. and its allies in the Middle East. It's the U.S. that is the key backer of Israel's state-sponsored terrorism against the Palestinians. Along with Iran, 18 of the 22 member states of the Arab League, including Saudi Arabia, Iraq and Kuwait, don't recognize Israel. The U.S. has the world's largest nuclear arsenal--Israel has the region's largest nuclear arsenal.

In recent years, U.S. imperialism has occupied Iraq, carried out regime change in Libya, pursued drone wars in Yemen and beyond, and helped to plunge Syria into a state of barbarism. But in the circumstances of the U.S.-led war on the Islamic State in Iraq and Syria (ISIS), Washington has had to rely on Iran as a tacit ally in the goal of stabilizing Iraq.

For Obama, then, an agreement to contain Iran's "threat to peace" helps conceal the U.S. role as the chief sponsor of the region's hardships, while also clearing the way for continued collaboration in stabilizing Iraq.

Netanyahu and his far-right co-thinkers in Israel insist that this is a bad deal, and that they prefer a better one. Yet everyone knows what Netanyahu really wants is no deal at all, in order to increase the likelihood of a future war with Iran.

Even Democratic Party fixtures like California Sen. Diane Feinstein, herself an enthusiastic backer of Israel, have tired of Netanyahu's scaremongering--Feinstein pointedly told the Israeli prime minister to "contain himself."

But it's nearly impossible to find commentators willing to state so plainly what should now be obvious: Israel, with U.S. backing, is the real aggressor. Blogger Richard Silverstein, who considers himself a Zionist critic of Israel, writes:

Iran and many states in the region believe it is Israel that is the primary aggressor in the region; that Israeli terror poses a major danger; and that Israel is the one seeking to annihilate the Iranian regime, if not Iran itself. Note that several "serious" Israeli or pro-Israel "analysts" have suggested attacking Iran with nuclear weapons. One of them, Sheldon Adelson, will likely spend $200 million in the next election cycle to elect a president who would be willing to do precisely that.

For those who want to oppose the tightening grip of U.S. imperialism on the region, it's important to point out that the new agreement with Iran doesn't offer "peace," but rather the pursuit of U.S. aims through the combination of diplomacy, sanctions and military intervention (or the threat of it).

THE REASONS behind Iran's enthusiasm for an agreement should be obvious, given the devastating impact of sanctions on its economy. Combined with the effects of lower oil prices, Iran's economic outlook of collapsing revenue and runaway inflation has increased the urgency of easing the sanctions.

The Obama administration, for its part, is anxious to move past the stalemate over Iran's nuclear policy, but has actually benefited from the confrontation with Netanyahu--because Obama can bind Iran to his agenda by threatening the alternative of having to deal with Republicans and their ally Netanyahu if Iranian officials won't accept what he's offering.

But the contradiction is that even though Obama has won a political victory with this deal, it must be heavily qualified. For one thing, the agreement merely puts in place a framework that must be followed by a comprehensive deal in June. But beyond this, the era in which the U.S., as the world's only superpower, was able to exercise unchallenged hegemony over the Middle East is clearly over.

The U.S. has exhausted itself fighting a series of wars that it has lost or at least not won, from Afghanistan to Iraq and Libya. It has been unable to oust Syrian dictator Bashar al-Assad. And now, after ISIS emerged out of the catastrophe of the U.S. occupation as a full-blown military power, the U.S. finds itself unable to wage another ground war, so the Obama administration must rely on proxies, allies and--in the case of Iran--even rivals to wage its wars for it.

In place of American hegemony over the Middle East, Obama has tried to create a balance of power in the region, in which various contending nations and forces are arrayed against one another. They may be allowed space individually to pursue their strategic interests, but by using each to frustrate the others, the U.S. hopes to remain at the top of the heap for as long as possible.

This war involving Egypt, Iran, Saudi Arabia, Israel, Turkey and the Gulf monarchies has already led to new horrors, such as Saudi Arabia's air war on Yemen, and new levels of despair in the countries already on the verge of collapse, such as Iraq, Syria and Libya.

The intensification of regional rivalries has also increased the power of the centrifugal forces pulling the region apart. Where this will end is anyone's guess, but one thing is certain: The U.S. nuclear agreement with Iran only quiets one source of instability temporarily--while creating new fissures and pressures that will eventually find expression, one way or another.