What SYRIZA must not become

In the aftermath of the parliamentary vote in favor of the new Memorandum negotiated by Prime Minister Alexis Tsipras, the left wing inside the ruling SYRIZA party has been organizing a challenge, demanding that the party remain committed to its declarations at its founding congress and during the January election campaign that the austerity measures accepted as a condition of Greece's bailout must be overturned.

Panagiotis Lafazanis, the best-known leader of the party's Left Platform, was forced out of his position as energy and development minister in the SYRIZA-led government and replaced by someone loyal to Tsipras. But that isn't the end of the struggle, as Lafazanis explained in an interview and article published in the Greek press, and collected for the Left Platform's Iskra.gr website. The two articles were translated into English by Antonis Martalis.

SYRIZA is in danger of being subverted

HOW LONG will your opposition to the agreement with the Europeans last, and what can it accomplish?

WE ARE not just dealing with any agreement between our country and the so-called "institutions." These negotiations have concluded with a new austerity Memorandum requiring neoliberal deregulation, massive cuts and the mortgaging of the public wealth of the country. SYRIZA should not have accepted this Memorandum in any way--and of course, it should not have voted for it.

However, the battle against the Memorandum does not end with the vote in parliament. The struggle will continue to reverse the position of SYRIZA and to stop the new Memorandum from being applied in practice. It must be canceled in practice, and with it, the old Memorandums can be canceled, too. If SYRIZA insists on implementing the new and old Memorandums, it is in danger of mutating into a pro-austerity party.

Personally, I would insist on fighting within the ranks of SYRIZA and defending the principles and values of the party and its anti-Memorandum orientation until this nightmare inflicted on the country is ended. 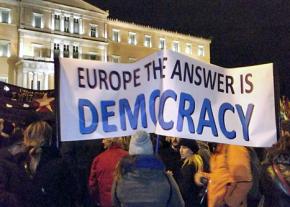 CAN THE Memorandum be annulled and Greece still remain in the euro?

AS I have said many times in meetings of the various bodies of SYRIZA, there cannot be any serious questioning of the Memorandums without simultaneously questioning the position of our country in the eurozone. The eurozone becomes more of a German prison of countries and peoples, within which Memorandums, in one form or another, tend to become the rule throughout.

IF SYRIZA's support for what is called the new Memorandum doesn't change, will you continue to stay in SYRIZA?

IF SYRIZA insists on implementing the new Memorandum to the end, then it is in danger of evolving into a larger DIMAR [a center-left party formed by moderate SYRIZA members who split from the party], or a kind of large, multifaceted Potami [a new party formed in the past few years which has supported new austerity measures].

I don't believe that SYRIZA can follow this disastrous course. Instead, I believe that SYRIZA will quickly revert to its anti-Memorandum roots. This, after all, is clearly the wish of the members of SYRIZA and of the left, which are maintaining democratic, progressive and socialist principles.

I DON'T believe in a method of promising one thing and then, with various excuses and pretexts, doing the exact opposite. This kind of unreliable, "say one thing and do another" behavior is why society stops trusting the political system.

It would be the height of irony to ask me, as a condition and evidence of support for the SYRIZA-led government, to support the Memorandums, old and new. We should not accept this logic.

I do not accept the ultimatums

THE HISTORY of bourgeois political life is filled with forces and individuals doing exactly the opposite of what they promise before an election. The left has always stood apart from this history.

Although the left has now lost credibility, it risks losing its own soul and the support of the people it must rely on to survive. Frankly, there could not be a worse tragedy than this for the country's future. People can be deprived of a lot, but they cannot survive with the total collapse of anything to trust in.

The top leadership of SYRIZA should not have agreed to a new Memorandum, as it, along with New Democracy, PASOK and Potami, has done with its vote in parliament. If SYRIZA continues down this mistaken road and applies the measures contained in the Memorandum, then it is in danger of being subverted, and the country will face a worsening of already tragic conditions.

Personally, I could never vote for a Memorandum that provides for new austerity measures, harsh neoliberal deregulation and new privatization of important properties and enterprises. This is not only for reasons of ideological and political consistency, but also because a third Memorandum will produce the same devastating effects of the previous two.

Political blackmail, even as raw and brutal as was shown by the neocolonialist masters of EU, is not always an acceptable reason for capitulating.

I never lecture about political correctness to anyone. I despise such a role more than anything. Policies must be judged mainly by their consequences.

However, I do not accept the ultimatums and foolish charges of betrayal for those who refuse to submit. Nor do I accept that democracy in my country, in the parliament and in a political party must be compromised for the sake of protecting society, any more than I agree with the resounding acceptance of the new Memorandum as a "necessary evil."

We certainly face difficult dilemmas--every bit as great as the ones invoked by some to justify the imposition of a new Memorandum--which require alternative answers. These answers exist. But they have not been considered. They have not even been made a topic of discussion, because they challenge Greece's place in the eurozone, which has paradoxically and simultaneously become not only an unquestioned religious dogma of the Greek capitalist oligarchy, but also, for some parts of the left in our country, the only possible path to "modernization" and "democratic socialism."