Homelessness is the crime, not the homeless

In cities around the country, the main housing plan is a jail cell, writes Allen Arthur.

ON A recent Monday afternoon at the corner of 29th Street and Park Avenue in the high-end Murray Hill neighborhood of Manhattan, two middle-aged men sat in the shade of a phone booth.

While they met there often, asking for change or chatting, on this day, they were approached by the NYPD's Homeless Services. Four armbanded officers with guns emerged from marked and unmarked vans to move the men away from the corner.

Scenes like this happen every day in every city. If it seems like an encounter with police is the last thing homeless people need, that is exactly what they face. As affordable housing options decrease, social services go underfunded, and the activities of homeless people and their advocates are further criminalized, homeless populations are being tossed into more frequent interactions with police.

These interactions not only highlight the diminishing options for the poorest and most vulnerable people in the U.S., but they have steadily become more deadly. Amid the wave of high-profile police brutality cases galvanizing the country, several involve the deaths of homeless people. 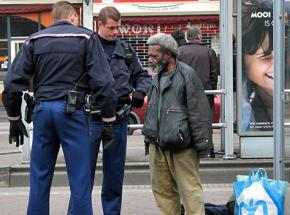 Brendon Glenn was an unarmed Black man and father of a new baby boy who was said by friends to have been struggling with alcohol. In May, he was murdered by police in Venice Beach after having an argument with a bouncer.

In the Miami neighborhood of Overtown Park, police killed an unnamed man in June for refusing to drop a pipe. The shooting occurred in front of a YMCA, with multiple children witnessing it.

Albuquerque--where the police murder rate is double Chicago's and eight times that of New York City--recently awarded $5 million to the family of James Boyd, a diagnosed schizophrenic living in the mountains, who police attempted to remove for "camping illegally." With Boyd armed with two large knives, the resulting standoff, involving more than 40 officers, lasted over four hours. When Boyd finally went to put the knives down, the cops opened fire.

Perhaps the best known of these incidents is that of Charly Keunang, better known as Africa.

A resident of Los Angeles' Skid Row, Keunang was an immigrant who struggled with depression and addiction. On the morning of March 1, officers roused Keunang from his tent. During the ensuing confrontation, one cop erroneously claimed that Keunang grabbed his gun--officers then shot Keunang six times. The LAPD refused to release body camera footage, but a bystander filmed the murder. Upon that video's release, the LAPD and local media joined forces for a massive smear campaign, dredging up Keunang's criminal past to justify his murder.

A recent and powerful article in GQ has brought this story some needed publicity, and his family recently filed a lawsuit against the city, the officers and LAPD Chief Charlie Beck.

WHILE THE murders have grabbed the most attention, their backdrop has been a massive criminalization of homelessness. Dozens of cities have passed "food sharing bans." Last summer, the NYPD conducted a series of raids on homeless shelters on the otherwise white and wealthy Upper West Side.

These punitive policies have been particularly prevalent in the U.S., but we are not alone: London has even put down spikes in areas where the homeless frequently sleep. The spikes are called--seriously--"defensive architecture."

The National Law Center on Homelessness and Poverty recently released a scathing report entitled No Safe Place. Examining the trend of criminalization, researchers found a number of startling facts: nearly one-fifth of all U.S. cities have a ban on sleeping in public; one-quarter have banned begging in public; and 43 percent of cities have banned sleeping in vehicles. The report also makes note of the many cities that enforce such bans--yet don't provide adequate shelter facilities for the homeless.

Pointing to numerous studies that showed housing and social workers to be vastly more cost-effective than police presence in dealing with homelessness, No Safe Place quotes the CEO of the Central Florida Commission on Homelessness:

The law enforcement costs alone are ridiculous. They're out of control...Our community will spend nearly half a billion dollars and at the end of the decade, these people will still be homeless. It doesn't make moral sense, and now we know it doesn't make financial sense.

All of the victims of police murder mentioned above were also struggling with addiction or mental illness--but, of course, poor communities and communities of color have unequal access to health resources (both mental and physical) and rehabilitation. Even federal funding for job training has decreased.

All of this has built a seemingly impenetrable wall around the homeless--and the police have been unleashed, as Keeanga-Yamhatta Taylor put it during a talk at the Socialism 2015 conference, to manage the erosion of social services.

UNSURPRISINGLY, THE populations most affected by homelessness are those that usually bear the brunt of society's violence.

It should also be noted that nearly a third of those living in New York City homeless shelters are employed--at jobs that obviously don't pay them enough to afford rent.

Stagnant or dropping wages, closures of schools and hospitals, wide-scale unemployment and slashed benefits drive many of the homeless to illegal means, just so they can eat. Drug use and sales, theft and even "survival sex"--prostitution not for money, but in exchange for the most basic necessities, such as food or a shower–-are some of the too-common ways that the homeless attempt to make it on the streets.

In the absence of suitable facilities and resources for the homeless, politicians hoping to appear "tough on crime" or desperate to cater to wealthy property owners use stories about these underground survival economies as an excuse to brutalize and criminalize the homeless.

But the dirty secret about homelessness is that, with an estimated 600,000 people homeless at any given moment and over 3 million homeless annually, the U.S. has about 18 million empty homes.

Despite the politicians' claims, it isn't true that the resources aren't available to adequately fight homelessness. On the contrary, in New York City, which has an astounding 10 percent of the country's homeless population, Mayor Bill de Blasio agreed to spend nearly $170 million on 1,300 new police officers, but hasn't created any viable affordable housing program to counter the mass displacement taking place, nor provided any substantial new funding for the city's underserved shelters.

The city's prisons, including the notorious Rikers Island, spend over $96,000 per year per prisoner, enough to give each one a home at the average New York City rent for nearly three years. Meanwhile, Los Angeles, which has about 5 percent of the country's homeless, has labeled Skid Row a "police containment zone" and assigned a cop for every block.

Back in New York, de Blasio's plan to "save public housing" depends almost entirely on incentives for private developers. Far from building housing as a public good, the plan ignores de Blasio's central campaign promise to raise taxes on the wealthiest New Yorkers--a promise which helped get him elected in a landslide--and instead raises fees on working people, operating on the model that if the developers don't make millions as a precondition, nothing will get done.

The de Blasio administration has recently come under fire for the horrific conditions at private homeless shelters receiving city contracts. Slumlords are paid as much as $3,000 per month per apartment by the city to operate buildings that have been cited for mold, collapsing structures and vermin--and which are held to virtually zero oversight.

IF THERE is sufficient money to help the homeless and it's cheaper to help poor people than to lock them away, why don't the politicians simply end homelessness?

Because there's no profit in it. Real estate developers donate massive amounts of money to politicians to not find adequate housing for everyone--and also to maximize the profitability of both existing housing and clear the way for new developments. Even when affordable housing is worked in, the developers are enticed not by altruism, but by tax breaks.

Similarly, by criminalizing the homeless, politicians are able to stoke racist and xenophobic fear, perpetuating the idea that "lazy" or "criminal" populations don't deserve help toward obtaining suitable, humane housing--but instead should be dealt with as an unfortunate element that endangers a city's quality of life. Both politically and economically, for the ruling class, the problem is more profitable than the solution.

While the statistics and the grisly cycles they illustrate seem insurmountable, there is a simple solution: make housing a human right for all people.

Eighteen million homes sit empty not because we have no one to fill them, but because they are kept empty for the sake of profit. As the news touts a recovery in new home construction, millions of people still live without homes or teeter just on the edge of housing insecurity, one unexpected expense away from being kicked out on the street.

Once there, they won't be offered raises, trained in new skills or have access to fully funded shelters to assist in the journey back to stability. Instead, cities are offering a jail cell as their only housing plan. It isn't some fundamental misunderstanding about how to treat the homeless, but the prioritization of wealth over their well-being that keeps so many people on the streets.