What will stop the police killing spree?

The struggle to make Black Lives Matter has exposed the scale of racist police violence--but as Danny Katch writes, the cops continue to kill with impunity.

That's what killed 12-year-old Tamir Rice on a Cleveland playground in November 2014, according to Cuyahoga County prosecutor Tim McGinty.

Those three words wouldn't be a bad way to begin to make sense of how a boy with a toy gun could be senselessly murdered by an inexperienced cop with a history of dangerous instability--and how the child's 14-year-old sister could be thrown to the ground and handcuffed when she tried to come to the aid of her dying little brother.

It truly was a perfect storm--though not an unprecedented one--of aggressive policing, disregard for Black life and weaponized paranoia that led, like so many others, to the death of Tamir Rice.

But that's not what McGinty meant. No, what the prosecutor--who is supposed to be in charge of holding all Cleveland residents, including cops, accountable to the law--was trying to claim was that Tamir Rice died due to a "perfect storm of human error," from the faulty information given by a 911 dispatcher to Officer Timothy Loehmann to the color of the toy gun. 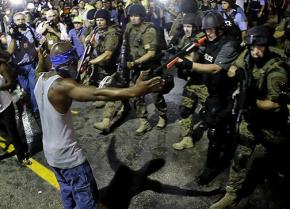 It was a justification, in other words, for why McGinty had decided that Loehmann's decision to open fire on a child within seconds of arriving on the scene wasn't worthy of even a single criminal indictment.

The Cleveland prosecutor was saying with a straight face that the police murder of Tamir Rice was the result of a freakishly unusual coincidence of unfortunate events--as if the whole country hasn't become painfully aware in the year and a half since the protests in Ferguson, Missouri, that cops routinely use deadly violence against the people they are charged with protecting.

Two major newspapers have recently begun tracking how many people are killed by police. The Washington Post puts the number at 965 in 2015, while the Guardian estimates it to be 1,134.

To put those numbers in perspective, the Guardian offers a couple of startling international comparisons: Cops in England and Wales have killed fewer people (55) in the past 24 years than American police killed in the first 24 days of 2015. And in Finland, police shot a total of six bullets in all of 2013--10 fewer than Chicago cop Jason Van Dyke fired into the 17-year-old body of Laquan McDonald as the teenager walked away from police.

Though you would never know it from media coverage, Americans are three times more likely to be killed by police officers than by mass shootings, which killed 300 in 2015, according to the Gun Violence Archive.

And people in the U.S. are infinitely more likely to die from police attacks than those committed by terrorists. Over the past 10 years, 38 have died in al-Qaeda and ISIS-inspired attacks and 47 have been killed by white Christian terrorists.

Of course, it's just these comparisons that should make us think hard about who we should picture when we hear about terrorists and raging gunmen.

RACISM PLAYS an obvious role in this epidemic of police violence. After Timothy Loehman wasn't indicted, social media was flooded with images of white children joyfully posing with real and toy guns that looked just as deadly as whatever Tamir Rice was holding at the time he was murdered.

Indeed, statistics back up this perception. According to the Guardian, Black people were more than twice as likely to be killed by cops than any other Americans. The Washington Post found that police were far more likely to use deadly force with little provocation when their victims were people of color:

In the majority of cases in which police shot and killed a person who had attacked someone with a weapon or brandished a gun, the person who was shot was white. But a hugely disproportionate number--three in five--of those killed after exhibiting less threatening behavior were Black or Hispanic.

Though it's important to understand that white people are killed by cops at a lower rate than Blacks, Latinos and Native Americans, they are still dying at the hands of police in alarming numbers--578 whites were killed by cops in 2015, or one every 16 hours.

To this point, no media organization has attempted the admittedly more complicated job of sorting victims of police violence by class, but anecdotal evidence indicates clearly that the poor and working class of all races suffer police abuse and murder at higher rates.

What is clear in all cases is that police are empowered to operate with an absurd degree of impunity--even in cases in which they demonstrate a level of incompetence that is a clear threat to public safety.

Take the murder of David Kassick, an unarmed Pennsylvania white man whose death was covered in a short video produced by the Washington Post.

When Kassick fled a traffic stop over an expired inspection sticker, Officer Lisa Mearkle chased him down, Tasered him repeatedly, and then, as the 59-year-old man writhed in pain on the ground, shot him twice in the back because she was afraid his twisting motions indicated that he was going for a weapon.

Mearkle was acquitted this past November. She told the jury she was only being charged "for political reasons."

Included among the 2015 dead are names that became well known in the wake of large protests--like Freddie Gray of Baltimore and Sandra Bland in Texas. The vast majority are like David Kassick, little known beyond the small circles of those who knew and loved them.

Yet even the indignity of "becoming a statistic" is a hard-earned step forward because this is a country that doesn't even keep a centralized count how many of its own people have been killed by its own police.

THE FACT that two media organizations have devoted resources to making their own counts is due to the emergence of anti-racist protest in recent years--a movement born, as Brittney Cooper memorably wrote at Alternet, out of the "irreconcilable contradictions" of a society that produced "Black presidents alongside dead unarmed Black boys in the street."

This movement asserting that Black Lives Matter has led to more awareness not only about the numbers of people police have killed but also about the racist nature of the violence. The percentage of Americans who think racism is a "big problem" jumped from under 30 percent in 2011 to almost 50 percent this past year.

The Democratic Party has taken notice. As Peter Beinart of the Atlantic points out, whereas Bill Clinton ran for president in 1992 by trumpeting his support for the execution of a mentally retarded Black death row inmate and demonizing the Black activist and rapper Sister Souljah, Hillary Clinton and her presidential rivals are tripping over themselves to claim full support for the Black Lives Matter movement.

But it's important for activists to understand that this support is all talk and little action--sort of like Hillary Clinton putting out a Kwanzaa-themed campaign logo while maintaining her support for Rahm Emanuel even as the Chicago mayor faces calls from Black protesters to resign over his role in covering up the murder of Laquan McDonald.

Nationally, Barack Obama's Department of Justice has initiated high-profile investigations into police departments in numerous cities--including Ferguson and Cleveland--but refrained from prosecuting any killer cops. The same is true of local authorities in cities across the country, most of which are led by Democratic administrations.

According to the New York Times, 18 police officers were charged in fatal on-duty shootings last year--a tiny number but up from an average of less than five in previous years.

As rare as indictments are, convictions are even more rare. One month after Lisa Mearkle was cleared of all charges in Pennsylvania, a mistrial was declared in the case against William Porter, the first Baltimore cop to go on trial for the murder of Freddie Gray.

In Chicago, Emanuel's plan to prevent his cops from killing is to have more of them armed with Tasers--in addition to their guns, of course--while trying to destroy decades of records of past investigations of police misconduct.

In New York City, the self-styled liberal champion Bill de Blasio has hired 1,300 more cops, created new and even more militarized units to be deployed against protests and to "combat terrorism" and has assigned police to clear homeless people off the streets.

As a movement that has done so much to increase awareness about police violence enters a new year, it is becoming ever more clear that Black Lives Matter confronts a perfect storm of racism, state power and a rotten two-party oligarchy that is many years in the making.

Moving forward will require more than mobilizations against new police atrocities, as important as these demonstrations of anger and outrage are. Those committed to challenging injustice and violence need to also understand and confront the connection of a racist and militarized police force to the wider political and economic system whose rulers are determined to preserve the status quo at any cost.