Clinton supporters say that Bernie Sanders' criticisms of their candidate are hurting the Democratic Party, but are they right? Elizabeth Schulte takes a different view.

GET READY for more complaints about how Bernie Sanders is helping the Republicans win the White House because...well, he just won't stop asking people to vote for him.

Leading Democrats were testing out this line--that Sanders was hurting the Democrats' chances against the Republicans by not bowing to the inevitable and surrendering the party's presidential nomination to Hillary Clinton--before a single primary was held, back in January.

But the "hey Bernie, stop spoiling our party" chorus picked up volume after Clinton's double-digit victory in New York last week, and will get louder still after Tuesday's five primaries, all in the Northeast. Clinton won handily in the two biggest states of the night, Pennsylvania and Maryland, though Sanders won Rhode Island and came close in Connecticut.

Clinton's lead in pledged delegates to the July convention--the ones chosen by voters--is commanding. At this rate, she probably won't need the unelected and undemocratic "superdelegates"--party officeholders and assorted insiders and operatives who were all going to vote for her anyway--to clinch the nomination. 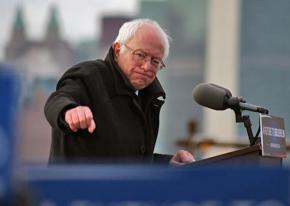 SO BERNIE Sanders is back to being the longest of long shots to win the Democratic presidential nomination. But to put it in these terms downplays what his campaign has accomplished.

Clinton is a consummate party insider--and the Democrats' heir apparent since right after Barack Obama won the last presidential election. Yet a self-declared socialist who wasn't even a party member until he began his campaign last year made a serious challenge for the nomination.

The millions of votes for Sanders, the enthusiasm he has generated, the fervor of youth support that he tapped into--all of this has shown the thirst for an alternative to the political status quo, and also exposed just how weak a candidate Hillary Clinton really is.

That's why the calls for Sanders to drop out are so frantic. "[I]s Senator Sanders going to stop attacks that hurt Democrats that we need up and down the ticket?" Clinton strategist Joel Benenson fumed in an interview on CNN's New Day. "Is he going to try to support the party that is in favor of protecting voting rights, women's rights, or turn himself into someone who will do what he said he wasn't going to do, and be a Ralph Nader and try to destroy the party when it comes to defeating Republicans in November?"

What exactly is Sanders doing to "destroy the party"? Apparently any disagreement with Clinton--any criticism, for example, of her ties to Wall Street, including the lavish speaking fees she received from super-bank Goldman Sachs--is nothing more than helping the Republicans.

Benenson and the other Clinton supporters have a lot of nerve with their complaints. In the 2008 campaign for the Democratic nomination, Clinton held out until June before she conceded that Barack Obama was going to come to the party convention with a majority of delegates. Her campaign's war on Obama continued through a May 31 Democratic National Committee showdown, as Sharon Smith wrote for Socialist Worker:

Clinton's supporters, whipped into a frenzied and desperate attempt to rescue her long-doomed campaign, couched their complaints as an attempt to restore "democracy" to the primary contests. But the racial overtones were hard to ignore...Former vice presidential candidate Geraldine Ferraro had primed the pump for the angry Clinton mob...in a racist tirade that appeared as a Boston Globe op-ed piece.

So complaints about Sanders the spoiler are pure hypocrisy. But the question remains: Is the Sanders campaign really hurting the Democrats' chances? Or has his campaign energized a section of the party base that Clinton could never relate to, as well as independent voters attracted to the class issues that Sanders has raised?

If Sanders endorses the party's eventual presidential nominee and works to get them elected, as he has promised to do all along, will he have hurt the Democrats--or helped them?

The answer to that question is important not only for the Democratic Party, but for those on the left who have looked to the Sanders campaign as part of an alternative that will continue beyond the final primary in June.

TO THE Democratic establishment--and to the mainstream media that obsesses about elections like a horse race--Clinton's big win in New York on April 19 sealed the deal.

But for the tens of the thousands of people who attended the massive Sanders rallies before the primary, or the much larger numbers who were just inspired by his message, it came as something of a surprise that Clinton could win so resoundingly.

Voter disenfranchisement played a role, as many Sanders supporters have claimed. For example, more than 100,000 people were reportedly purged from the voting rolls in Brooklyn. But the truth is that the Clinton campaign didn't have to break any rules to have a strong advantage going into the primary.

New York has some of the most restrictive voting laws in the country. There are no provisions for early voting, same-day registration or excuse-only absentee voting (in cases when voters are out of town or disabled). The voter registration deadline was 25 days before the primary--and independent or unaffiliated voters, such as those registered as Green Party members, had to change their party registration 193 days before--a full six months.

As a result, an estimated 3 million registered voters--27 percent of the total--weren't able to vote in the primaries because they weren't already registered Democrat or Republican. This had the biggest impact on Sanders supporters. Of the self-identified independents who did vote, around three-quarters supported Sanders, according to exit polls.

Among New Yorkers under 30 years old, 37 percent identify as independent, while 15 percent of African American voters and 22 percent of Latino voters are also unaffiliated with any major party, according to analysis by Prime New York.

Beyond the inbuilt advantage for Clinton of a so-called "closed" primary, the ability of the Democratic Party machine to get out the votes for its favorites can't be underestimated. With the argument that she's the only viable choice to beat the Republicans, Clinton won three-quarters of Black voters and 63 percent of Latinos, according to exit polls.

On top of that, Clinton had "inevitability" itself on her side--72 percent of Democratic primary voters said they thought she would be the ultimate nominee, according to ABC News.

DESPITE ALL the demands that he should pack it in, however, Sanders has something that Clinton doesn't--fervent support among a layer of people, disproportionately younger, condemning corporate greed, political corruption and social injustice.

According to ABC News' analysis of exit polls in New York, "Nearly two-thirds [of voters] said Wall Street hurts the U.S. economy, and [Sanders] won them by a dozen points. And nearly half of voters said they were very worried about the economy's future, more than in most other states; Sanders won them by 10 points."

For this part of the population, the Sanders campaign offers something unique, at least in this election: A vision focused on raising expectations about what is possible, rather than the Clinton message about what isn't.

"If you are born in Baltimore's poorest neighborhood, your life expectancy is almost 20 years shorter than if you're born in its wealthiest neighborhood," Sanders told a gathering in the very city where people took to the streets nearly one year ago against the racist police murder of Freddie Gray.

Compare this to Clinton, who won praise from none other than the Koch Brothers, the billionaire arch-conservatives behind anti-union legislation and right-wing politicians around the country.

"As far as the growth of government, the increase in spending, on restrictive regulations, it was two-and-a-half times [greater] under Bush than it was under [Bill] Clinton," Charles Koch told ABC News. Asked if it was possible another Clinton could be better than a Republican, Koch said: "It's possible."

With all the calls for Sanders to fold up his tent because he is dividing the party, the Democrats are actually more united than ever.

Polls after the New York primary showed that nearly six in 10 Republican primary voters said the 2016 campaign has done more to divide than to energize the party--while among Democrats, two-thirds said the campaign was energizing their side. Many fewer voters ruled out a vote for either Clinton or Sanders in November compared to Republican primary voters looking over their dismal choices.

BUT SANDERS brings something to the table that Clinton cannot--and that's why, as much as some of her supporters say they want Sanders to shut up, plenty of others know he has a lot to offer their candidate and the Democratic Party in general.

The Clinton campaign is already clamoring to get its hands on Sanders' list of supporters--a treasure trove that it wants to mine for support for a "stop the Republicans" message come November. There was a lot of posturing and threats about the lists this past week, but veteran Democratic operatives counseled patience--and those on the left who hope Sanders will shift course away from the Democrats should listen closely.

"Bernie usually finds a way to be helpful at the end of the day," Faiz Shakir, digital director for Senate Minority Leader Harry Reid, told Politico. "That's always been the case, whether it was the Affordable Care Act, Dodd-Frank. There are places where he might have, initially, some concerns. At the end of the day, he's found a way to be helpful. That's his instinct, and my sense is he'd be similarly disposed on this, as well."

That statement helps explain what "political independence" means to Sanders. He is sharply critical of the mainstream leaders of the party like the Clintons, and he is right as far as that goes. But for many decades, he has stopped short of any significant break with the Democratic Party, even when he kept the label of political independent.

In presidential elections, for example, Sanders rejected support for any genuine left candidate like Ralph Nader. In one election after another, he has supported the Democratic candidate, at the expense of independent challengers--and sometimes at the expense of progressive politics itself.

Despite all this, of course, the Sanders campaign has inspired people to look critically at the Democratic Party and the two-party system--and at least consider that there may be an alternative. That sentiment was on display at the huge Sanders rallies in New York in the lead-up to the primaries.

The Sanders campaign has expressed many of the same sentiments and concerns of other high points of politicization and struggle of the recent past--the Occupy Wall Street movement in late 2011, or the occupation of the Wisconsin Capitol building months before against anti-union laws. More generally, there is a deep dissatisfaction with the status quo--and that means more people who are searching for an alternative, including to what the Democrats offer.

But as Election 2016 rolls on, the pressure will grow for people whose expectations have been raised by Sanders to settle for the inevitable, lowered-expectations choice, Hillary Clinton--and the self-described socialist from Vermont will, in all likelihood, be helping to sell Clinton to his supporters.

We need an independent, left-wing alternative to the political status quo represented by Clinton. Anything less--even if it has all the determination of the Sanders campaign in challenging Clinton on the issues and her record--will contribute to the power of the Democratic Party.