Nicole Colson reports on the outpouring of solidarity for the victims of a horrific mass shooting--and the need to challenge the tide of racist scapegoating of Muslims.

The word alone isn't enough to describe the feeling as the country woke up to news of the worst mass shooting in modern U.S. history. For three hours in the early morning of Sunday, June 12, 29-year-old gunman Omar Mateen kept killing at Pulse, a popular Orlando, Florida, gay nightclub. By the time he was killed himself, 50 people were dead and at least 53 wounded--one out of every three people who had been at the club.

The response was immediate and overwhelming. Amid the shock and grief, thousands in Orlando and elsewhere turned out to donate blood (despite federal guidelines that bar gay and bisexual men from being allowed to donate blood) or offer any help they could.

In cities across the U.S., vigils took place the night of the terrible crime--drawing dozens in some places, hundreds in others, but all with a sober determination to stand up against hate.

Often, the Muslim community took a lead to push back against the right-wing narrative already taking shape--and with a plea: Don't turn a horrific tragedy into an excuse for scapegoating and Islamophobia. 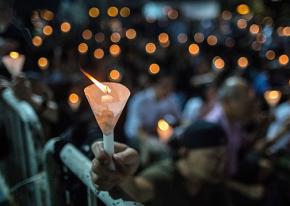 NATURALLY, THE first question on most people's minds was how anyone could commit such a terrible crime. But individuals and organizations with an agenda of war and racism were ready with an answer.

They fed the assumption, eagerly taken up by the media, that Mateen--a resident of Port St. Lucie, Florida, and native of New York City, whose parents emigrated from Afghanistan--was connected to "Islamic terrorism."

Police said that Mateen was well prepared for the attack, equipped with an AR-15-type assault rifle. He had reportedly been employed as a guard in a juvenile detention facility by G4S Secure Solutions, one of the largest global mercenary firms and security contractors. He was licensed to carry firearms and had legally purchased a handgun and another weapon in the past week, though it isn't clear yet whether these were the same weapons used in the attack. Photos of Mateen from social media showed him posturing in shirts emblazoned with NYPD logos.

As this article was being written, it remained unclear to what extent Mateen was connected to reactionary organizations such as the Islamic State in Iraq and Syria (ISIS). Law enforcement officials say that just before he carried out the attack in Orlando, Mateen called 911 and pledged allegiance to the leader of ISIS, Abu Bakr al-Baghdadi, and also referenced the Tsarnaev brothers, who carried out the 2013 bombing of the Boston Marathon.

But as of now, there is no evidence that Mateen was directed by ISIS. The theory being pushed is a new favorite of "terrorism experts"--that Mateen was "self-radicalized," an isolated individual who gravitated to aspects of fundamentalist ideology and violence, and acted on that basis.

But the theory has some holes in it. According to Mateen's ex-wife, during the time they lived together, he was abusive and violent toward her. She said Mateen wasn't particularly religious and showed no indication of subscribing to radical Islamism.

A friend told the Washington Post that Mateen became more devout after his divorce and a pilgrimage to Saudi Arabia, but that he never expressed any sympathy for ISIS or other terrorist groups.

At the mosque he attended, Imam Shafiq Rahman told reporters that Mateen "was the most quiet guy; he never talked to anyone," and never asked for any spiritual guidance. Rahman stressed repeatedly that violent ideology had no place at the mosque.

Federal authorities revealed that Mateen had been investigated by the FBI twice before, in 2013 and 2014, but their inquiries didn't turn up any evidence to back up charges against him.

Following the killings, Mateen's father, Mir Seddique, told NBC News that the rampage had "nothing to do with religion," but was sparked by his son's bigoted response to seeing two men kissing.

This corroborates the statement of a former co-worker, Daniel Gilroy, who, according to the New York Times, said Mateen often talked about killing people and frequently used racist and bigoted slurs.

Mateen's massacre is described commonly as an act of "madness"--ignoring that those who are mentally ill are far more likely to be victims of violence than perpetrators of it--yet it is obvious that Mateen's actions have their roots in a society dripping with bigotry and hate. Regardless of his connection, if any, to terror groups, Mateen's rage--whatever its precise sources--coalesced into a toxic mass of violence that ended in a bloodbath.

But unlike other mass shootings in U.S., the Orlando attack is already being used to assign guilt to Islam--and, by extension, all Muslims.

ANTICIPATING THE tide of Islamophobia to come, leading Muslim figures and organizations responded with unequivocal denunciation.

"We condemn this monstrous attack and offer our heartfelt condolences to the families and loved ones of all those killed or injured," Rasha Mubarak, Orlando regional coordinator for the Council on American-Islamic Relations, said in a statement. "The Muslim community joins our fellow Americans in repudiating anyone or any group that would claim to justify or excuse such an appalling act of violence."

It shouldn't need to be said that the action of one individual--whether a religious adherent or not--doesn't reflect the entirety of the world's 1.6 billion Muslims or the 3.3. million Muslims living in America. Yet the political climate in the U.S. ensures that some public figures will try to ascribe collective guilt.

Most predictable was the Republican presumptive presidential nominee Donald Trump, who has made bigotry, Islamophobia and shameless opportunism defining features of his campaign. In the hours after the massacre in Orlando, Trump's social media postings included: "Appreciate the congrats for being right on radical Islamic terrorism, I don't want congrats, I want toughness & vigilance. We must be smart!" and "Is President Obama going to finally mention the words radical Islamic terrorism? If he doesn't he should immediately resign in disgrace!"

In a longer statement from his campaign, Trump doubled down on his call late last year for a ban on Muslims entering the U.S.--ignoring the fact that Mateen was born in the city Trump claims as his home.

Trump also claimed, "Since 9/11, hundreds of migrants and their children have been implicated in terrorism in the United States." That's a flat-out lie, but one that will undoubtedly incite violence and vigilantism against Muslims, including "their children."

By comparison, Hillary Clinton sounded more human in her response to the killings. But she couldn't help using the massacre as a political opportunity, not only implying a link to terrorism without any evidence, but promoting her personal bona fides in fighting the so-called "war on terror" and promising to stop "attempts to recruit people here and everywhere, and hardening our defenses at home."

Even Bernie Sanders, the left-wing candidate for the Democratic presidential nomination who many hoped would bring a different view into the conversation about Orlando focused on gun control and "destroying ISIS"--without saying anything about the need to challenge anti-gay bigotry or push back against the demonization of Muslims.

AT THE heart of the Orlando massacre is an uncomfortable reality that most media and political figures won't examine: The way that toxic bigotry can metastasize into violence, especially in a society with easy access to the most deadly of weapons.

Consider Marco Rubio, the Florida senator and failed contender for the Republican presidential nomination. Rubio grabbed headlines by lamenting that LGBT people were targeted in Orlando "because of the views that exist in the radical Islamic community about the gay community," as he said on CNN.

Anyone listening to those words might imagine that Rubio cares about the rights of the LGBT community. But he doesn't. Rubio and any number of other Florida politicians want to restrict LGBT rights--often on the basis of their own fundamentalist religious beliefs, though of the Christian variety.

Not only is Rubio an opponent of same-sex marriage, but he supports a "right" for business to discriminate against LGBT people on the basis of "religious freedom." He's called allowing LGBT parents to adopt children "a social experiment." And Rubio has helped raise funds for the Florida Family Policy Council, a right-wing organization that promotes abusive "reparative therapy" that classifies gay sexuality as a "mental disorder."

At a time when Republicans in particular have whipped up hysteria about the supposed threat that transgender people pose by using bathroom facilities corresponding to their self-identified genders, any who now claim to be outraged by bigotry against the LGBT community are the rankest kind of hypocrite.

For his part, Barack Obama, said in a press conference following the shooting that it was "an act of hate. And as Americans, we are united in our resolve to defend our people."

In fact, Omar Mateen was "our people"--an American whose views of LGBT people was irreparably warped by bigotry, whatever inspired it.

At his press conference, Obama warned, "This massacre is...a further reminder of how easy it is for someone to get their hands on a weapon that lets them shoot people in a school or in a house of worship or a movie theater or in a nightclub."

But Obama won't question the relentless violence, both extra-judicial and state-sanctioned, directed by American institutions of power against the oppressed at home and around the globe--from dropping bombs abroad to the unrestrained brutality of police and, yes, prison guards like Omar Mateen. That violence is woven into the fabric of U.S. society.

Even if Mateen did commit mass murder in the name of his twisted understanding of Muslim religious doctrine, that is no excuse for accepting the dominant ideology generated by academic and political elites about a "clash of civilizations" between Western societies and those of the Middle East.

Reactionary organizations like ISIS have everything to gain from perpetuating this conflict. In fact, their attacks in Paris last year and Brussels this year did not generally target those who wield power or commit state-sanctioned violence. The attacks engineered by ISIS--and again, there is, as of yet, no evidence of any connection between Mateen and ISIS--are meant to provoke Islamophobia, and ultimately discourage Muslims from hoping for any form of peaceful existence in the West.

There is an alternative to hate and bigotry. In cities across the U.S., from San Francisco to New York and beyond, people turned out on short notice to pay their respects to the victims and consider what can be done now.

In New York City, some 400 gathered at the Stonewall Inn--the historic birthplace of the modern fight for LGBT liberation. Chants broke out of "No hate!" and "Orlando--we got your back!" As one young queer Muslim woman told the crowd: "I see people on the street shouting 'Kill all the Muslims.' I came to this country to be safe, and I found safety in this community, in the LGBT community. We need to keep that love. We cannot stop things like this from happening by adding to the hate."

As Steven Thrasher wrote for the Guardian website: "Terrorism works because it makes people afraid of our fellow human beings. Let us not let terrorism work this time. As our ancestors did not at Stonewall, let us not fall to fear."

Sean Larson contributed to this article.