They want to use Orlando for the “war on terror”

The outpouring of grief and outrage at the murders in Orlando stands in stark contrast to the cynical rhetoric of political figures, from top to bottom, writes Eric Ruder.

WITH EACH passing day since last weekend's massacre at an Orlando nightclub, my grief has become outrage. But it's pointed not at officially sanctioned targets, but the officials doing the sanctioning.

While crowds of people take to the streets to mourn collectively, raising slogans like "Don't turn homophobia into Islamophobia," a parade of elected officials, presidential candidates and opinion-makers are engaged in doing precisely that--offering up "solutions" that scapegoat Arabs and Muslims and will only exacerbate the toxic brew of hatred, bigotry and violence that already makes America home to more than half of the world's worst mass shootings in the last 30 years.

It was easy to get angry at Donald Trump, who predictably wasted no time in attacking two favorite targets: Syrian refugees and Barack Obama. Trump called Syrian refugees--who, it bears repeating, are fleeing the violence and oppression of the Islamic State in Iraq and Syria (ISIS)--"the all-time great Trojan horse" that threatens "our entire way of life" because the refugees are "sick with hate" and "no different than this maniac." 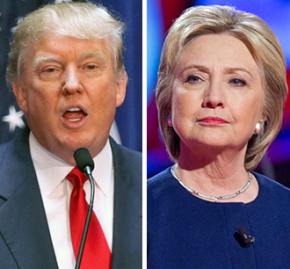 Trump had these choice words regarding Obama: "In his remarks [Monday], President Obama disgracefully refused to even say the words 'Radical Islam.' For that reason alone, he should step down." He leveled the same charge at Hillary Clinton.

New Jersey Gov. Chris Christie, an early endorser of Trump, now considered one of his campaign surrogates, made the case for stepped-up war as a response to the Orlando massacre even more explicit. "It is not our fault this hate exists in the world," said Christie. "But it is our responsibility, in my opinion, to eradicate this hate in the world...You've got to get over there and make them pay where they live."

Where, I wondered, could we see the air strikes unfold firsthand? Would I have to purchase a plane ticket to LaGuardia airport in Queens, where the shooter Omar Mateen was born--or to West Palm Beach, Florida, the nearest major airport to Port St. Lucie, where Mateen lived?

Mateen didn't receive weapons training in the deserts of the Middle East, but right here in the good old USA--as a requirement for his job working for the security and mercenary contractor G4S, which runs private prisons, immigrant detention centers and other such facilities around the world.

BUT MY rage didn't stop with Trump--especially after Hillary Clinton, in what is surely a disturbing preview of how similar debates will unfold as Election Day 2016 approaches, took the bait.

"If [Trump] is somehow suggesting I don't call this for what it is, he hasn't been listening," said Clinton on NBC's Today. "I have clearly said we face terrorist enemies who use Islam to justify slaughtering people. We have to stop them and we will. We have to defeat radical jihadist terrorism, and we will."

With this statement, Clinton was the one using a war against Islam to justify slaughtering people--suggesting that Mateen's tenuous relationship to a religion with 1.6 billion adherents around the world is a rationale for adding to the 12,000 air strikes and counting carried out in the name of the U.S.-led war on ISIS. The bombardment has not degraded ISIS's fighting capacity, while at the same time handing its leaders the opportunity to promote themselves as "resisting the American Empire."

Barack Obama likewise said in a statement last weekend that the massacre in Orlando was "an attack on all of us and on the fundamental values of equality and dignity that define us as a country." Yet this president, who came to office claiming to be antiwar, has escalated the U.S. drone war, bolstered authoritarian dictatorships across the Middle East and beyond, and stoked further violence in Afghanistan, Iraq, Syria and beyond. The leader of the world's most powerful machine for creating violence has no place lecturing about moral "values."

For his part, Mateen seems to have been very confused about Islam itself--having variously proclaimed his allegiance to Hezbollah, al-Nusra and ISIS, three very different forces that are currently at war with each other militarily, not to mention separated by doctrinal differences.

Mateen's ex-wife Sitora Yusufiy, who fled abuse in 2009 shortly after they wed, said that Mateen wasn't particularly devout when she knew him, preferring to spend his time at the gym. But she did say that he would fly into violent rages while spouting homophobic rhetoric.

Combined with reports now emerging that he frequented the nightclub where the massacre took place and used a gay dating app, the dark hatred that spilled forth in the early morning hours of June 12 seems to be drawn from the very American cesspool of homophobia and repression, rather than Islamic prohibitions on homosexuality--prohibitions which also permeate Christian and Jewish scripture, by the way.

In this context, it's worth remembering that Hillary Clinton only came out in support of gay marriage in 2013--after spending a decade opposing it. And that the Christian Right that has introduced some 200 anti-LGBT bills in the last six months. And that opinion polls show American Muslims are more supportive of marriage equality than evangelical Christians.

THE PORTRAYAL of the Orlando massacre as an act of "radical Islam" should be categorically rejected--but Clinton is endorsing this view, and so are prominent liberals.

Actually, Mateen--who worked as a prison guard and fantasized about joining the NYPD--lashed out from America, and at some of America's historic and most vulnerable targets: gay, lesbian and transgender people who were predominantly Latin immigrants.

The history of their persecution includes the actions of Eric Rudolph, who in the 1990s bombed abortion clinics and a gay bar, as well as the largely forgotten arson that killed 32 at a gay nightclub in New Orleans in 1973.

James Wesley Howell might have added his name to the list with Rudolph. He was headed to a Los Angeles gay pride event last weekend with three assault rifles and explosive chemicals, but police received a call about a prowler that led to a search of his vehicle. If Howell hadn't been picked up, Mateen's mass shooting may not have been the only one last weekend.

Plus there's the murderers of Matthew Shepard and so many other victims of beatings and killings of gay and transgender people.

It should be obvious: The Orlando massacre isn't specific to Islam.

Religious conviction might have served as a more tolerable self-justification for Mateen than confronting fears about his own sexuality, and given Mateen a sense that he was performing a divine duty--though Christian and Jewish fundamentalists also justify similar homophobic barbarism.

That makes no difference to ISIS, with its vile record of persecuting LGBT people, among other victims, in the areas where it rules in the Middle East. It believes in a "clash of civilizations" between Islam and the West every bit as much as the reactionaries speaking out on U.S. airwaves these past few days.

More bombing of Syria and Iraq will solve nothing--least of all the toxic hate that caused the massacre in Orlando. If we need a war, it is a war on bigotry, on racism and on homophobia. We need a fight against the downward spiral of social conditions that cause alienation and prime people to accept misplaced solutions to real problems.

And we should oppose all those figures and forces--from Trump to Clinton, as well as ISIS--that want war between the U.S. and the "Islamic menace." The people who took to the streets over the past few days to oppose violence, honor the victims, celebrate LGBT pride and reject hate are standing up for the opposite.