The shameful foundation of the Clintons’ power

THE STATED mission of the Clinton Foundation, set up at the end of Bill Clinton's second term in the White House, is to "alleviate poverty, improve global health, strengthen economies, and protect the environment."

But far more important to its operations is the Clinton Foundation's unstated mission: to further entrench the already formidable power of the Clinton family.

The foundation itself has been the subject of countless Republican-inspired inquiries and attacks, including a new IRS investigation of its finances announced in the midst of the Democratic National Convention, though it was overshadowed by Donald Trump's nonstop buffoonery.

In the rush to tarnish the Clintons by any means necessary, the right typically substitutes spin for substance--such as the erroneous accusation that the foundation spends only about 6 percent of its revenue on projects in the field. 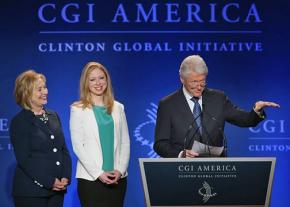 But beyond the Republican bluster, there is a substantial critique of the Clinton Foundation: At its core, it fuses fundraising, influence-peddling, Washington networking, "humanitarian" causes and an endless grasp for power and money.

Though taking care to adhere to the letter of the law, the foundation comes close to the line in many cases--for example, soliciting donations by offering face time with the Clintons in ways that seem suspiciously like a political campaign for elected office, but not exactly like that, because that would be a violation of the law.

After Hillary Clinton stepped down as Secretary of State in 2013 to focus her attention on campaigning for the White House, she officially rejoined the Clinton Foundation. As the Washington Post reported in 2015:

[T]he organization has stepped up its solicitation efforts in anticipation of soon losing one of its chief fundraisers [Hillary] to the campaign trail--building a $250 million endowment designed to provide some long-term stability.

The recent efforts have at times looked like a political campaign. A contest offered foundation donors the chance to win a free trip to New York to attend a Clinton gala and have a photo taken with the former first couple. Hillary and Chelsea Clinton hosted a "Millennium Network" event in 2013 aimed at cultivating a younger generation of philanthropists. According to an invitation, there were six tiers of donations, ranging from $150 for individuals to $15,000 for a couple seeking a photograph with Hillary Clinton.

USING METHODS like this, the Clinton Foundation raised some $2 billion since its inception 15 years ago.

"Nearly half of the major donors who are backing Ready for Hillary, a group promoting her 2016 presidential bid, as well as nearly half of the bundlers from her 2008 campaign, have given at least $10,000 to the foundation, either on their own or through foundations or companies they run," according to the Post.

But some of the foundation's biggest donors are foreign governments, which are barred by federal election law from giving directly to candidates for public office. According to longtime Democratic operative David Sirota:

Federal law designates the Secretary of State as "responsible for the continuous supervision and general direction of sales" of arms, military hardware and services to foreign countries. In practice, that meant that Clinton was charged with rejecting or approving weapons deals--and when it came to Clinton Foundation donors, Hillary Clinton's State Department did a whole lot of approving.

While Clinton was Secretary of State, her department approved $165 billion worth of commercial arms sales to Clinton Foundation donors. That figure from Clinton's three full fiscal years in office is almost double the value of arms sales to those countries during the same period of President George W. Bush's second term.

Fully one-third of foundation donors giving more than $1 million at a time are foreign governments. When the Obama administration vetted Clinton for the post of Secretary of State in 2008, it barred foreign governments that had previously given to the foundation from increasing their donations, in order to deflect accusations about purchasing influence from America's highest-ranking diplomat.

As part of that agreement, the Clinton Foundation reported that prior to 2008, Saudi Arabia had contributed between $10 million and $25 million to its coffers--a strange patron of a foundation that promotes itself as a fierce advocate for women's rights. But as should be obvious, how the money is used isn't generally as important to the governments, corporations and corporate executives contributing as the influence they buy.

You might think that Hillary Clinton would find it troubling to accept money from sources such as Saudi Arabia. But that's precisely the point, according to Michael Hudson, author of Killing the Host: How Financial Parasites and Debt Bondage Destroy the Global Economy:

Nobody, I think, in American history has merged their public service as Secretary of State or president with their private gains to the extent that Hillary really has. And by that I mean the Clinton Foundation, overall.

Hillary's in a position to go to Raytheon, to Boeing, and say, look, do I have a customer for you. Saudi Arabia would love to buy your arms. Maybe we can arrange something. I'm going to do my best. By the way, you know, my foundation is--you know, I'm a public-spirited person and I'm trying to help the world. Would you like to make a contribution to my foundation?

Well, lo and behold, the military-industrial complex is one of the big contributors to the Clinton Foundation, as is Saudi Arabia, and many of the parties who are directly affected by her decisions.

THE CLINTON Foundation has staffers and programs in dozens of countries working on countless issues. But it's perhaps best known for its high-profile role in the reconstruction of Haiti after a devastating earthquake struck there in January 2010.

The foundation's Haitian initiatives, like similar operations elsewhere, are distinguished by an allegiance to the free market and a corporation-centric solution to social problems.

In this respect, the Clinton Foundation's operations in Haiti bore a striking resemblance to the Bush administration's arrogant colonial posture toward the occupation of Iraq--right down to the way the Bush administration deployed recent Ivy League graduates to carry out central elements of the U.S. empire's plans for occupation and reconstruction.

According to an unnamed UN official who talked to journalist Janet Reitman for a 2011 report in Rolling Stone, there was a "dual problem" with the Clinton Foundation staffers:

First, they had no background in development--they didn't know what they were talking about in aid or humanitarianism. Second, they didn't even realize it. They had come to Haiti in their suits convinced they were going to fix the place, and then they looked really confused when we would try to explain to them why the ideas they came up with on the back of an envelope on the plane over wouldn't work.

Indeed, the iconic accomplishments of the Clinton Foundation in Haiti today are an industrial park built to help foreign-owned clothing manufacturers exploit low-wage Haitian labor; trailers to house schools for Haiti's next generation of workers; and a luxury hotel for wealthy corporate executives who need a place to rest their weary heads as they seek out new business opportunities.

IN 2012, Bill and Hillary Clinton personally attended the opening ceremony of the Caracol Industrial Park, which was supposed to create some 60,000 jobs for Haitians longing for decent employment. Among the celebrities who attended the opening were Sean Penn and Ben Stiller, according to the Washington Examiner.

But a year after its opening, the park had only produced 1,500 jobs. "Hundreds of smallholder farmers were coaxed into giving up more than 600 acres of land for the complex, yet nearly 95 percent of that land remains unused," according to an Al Jazeera report published in September 2013.

The Clinton Foundation disgracefully contracted with Clayton Homes--the same firm sued by the U.S. government for supplying trailers reeking of formaldehyde fumes to Hurricane Katrina refugees--to provide trailers to serve as schools for the children of the town of Léogâne, according to a report in the Nation by Isabel Macdonald and Isabeau Doucet.

Warren Buffet, owner of the investment firm Berkshire Hathway, which in turns owns Clayton Homes, was a prominent supporter of Hillary Clinton's 2008 presidential campaign. Buffet co-hosted a fundraiser that raked in more than $1 million for her campaign.

But the Clinton Foundation did see at least one project through to completion, under the auspices of the Clinton Bush Haiti Fund. The fund invested $2 million to complete the construction of a luxury hotel in Pétionville.

The Oasis Hotel "symbolizes Haiti 'building back better' and sends a message to the world that Haiti is open for business," according to Paul Altidor, vice president of the Clinton-Bush Haiti Fund. "For Haiti's recovery to be sustainable, it must attract investors, businesses and donors, all of whom will need a business-class, seismically safe hotel."

But these trickle-down visions of development are precisely what angers Haitians about the colonial arrogance of the West's reconstruction efforts. "All the money that went to pay the salaries of foreigners and to rent expensive apartments and cars for foreigners while the situation of the country was degrading--there was something revolting about it," former Prime Minister Michèle Pierre-Louis told the New York Times in 2012:

The practices of the Clinton Foundation illustrate the total embrace of neoliberalism and the free market by the Clinton clan--to the family's enormous financial benefit.

Remember that the next time you hear another liberal blowhard complain about how anyone who says you're acting out of "privilege" if you aren't ready to vote for Hillary Clinton. In reality, the Clintons themselves represent the pinnacle of privilege, fused with the power of the U.S. government and its foreign policy agenda.

Challenging the Clinton establishment is part and parcel of challenging the privileges of those who stand atop the global capitalist system.