It's become an annual tradition for officials at every level of government: Cut public schools to the bone and then blame teachers for the result. Julian Guerrero explains.

STUDENTS AND teachers are back in the classrooms--and facing another year of decimating budget cuts imposed by federal and state legislators.

"It has been death by a thousand cuts," Chicago teacher and union activist Sarah Chambers told In These Times earlier this year. "But recently it's felt more like, I don't know, chopping off our arms.

"We've seen over the years more layoffs, class sizes increasing, cuts to counselors and clinicians, our schools being closed, private schools and charters opening up. It's making the learning and working conditions very difficult in the schools."

Look at the numbers, and it's obvious that Chambers isn't imagining things. Congress has reduced overall education spending by nearly 20 percent in the five years since 2011. That's five times more than overall federal spending cuts.

Programs like the Preschool Development Grant, School Improvement Grant and Safe Schools--created to provide funds for the creation or expansion of high-quality preschool programs, to boost student achievement in low-performing schools, and to fund projects to reduce violence and improve the learning climate in schools--were sacrificed by Congress, along with two dozen other programs, on the altar of austerity, for a total of $2 billion in deficit reduction. 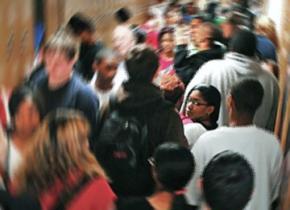 Nor is this just a federal trend. States and municipalities, which combined account for roughly 91 percent of school funding, have also been making drastic cuts since the start of the 2007-08 recession.

Overall, funding from these sources has improved slightly this year. But states like Oklahoma, Arizona and Wisconsin have continued to cut funding for already impoverished education systems--often in order to give more tax cuts to wealthy residents.

WHILE POLITICIANS scapegoat teachers for "failing schools," it is their relentless budget cuts that are creating overcrowded schools and classrooms. Funding for school construction has fallen by 37 percent between 2008 and 2014, while the number of students enrolling in school has risen by 1.1 million. In that same time, local school districts cut a total of 324,000 jobs.

As with all cutbacks in the public sector, the effect has hit communities of color the hardest.

Higher education has also been drastically affected by austerity in the years since the Great Recession. Funding for colleges has dropped $10 billion, and states are spending 18 percent less--$1,598--per college student per year than they were before 2007. Students have been forced to pay 33 percent more--an extra $2,333 in annual tuition--in order to close the gap.

As is the case in K-12 education, these cuts have a disproportionate effect on students of color. Despite rising enrollment rates among Black and Latinx freshmen, a recent study found that every $1,000 of increased tuition reduces racial diversity by almost 6 percent at non-flagship public colleges--the entry point to higher education for most first-generation and low-income students.

Teachers, students and working-class families at every level of education are facing an onslaught of cuts by state and local governments that are following the trend established by national political leaders of both parties--who have decided, whatever their rhetoric about wanting great schools, to make public education a low priority.

ALTHOUGH SPENDING cuts to education have been the norm since the 1980s, the nine years since the Great Recession of 2007 have accelerated the trend, affecting public school systems and social life in ways that go beyond shrinking budgets.

The recession was a major blow to state spending on social programs, but the specific austerity plan that Americans have been enduring for the past several years arose out of the growing budget deficit and the political gridlock over how to lower it back in 2010.

As Lance Selfa wrote in Socialist Worker, "Obama has consistently pledged to seek a 'grand bargain' with the GOP, in which he wins Democratic support for cutting Social Security and Medicare in exchange for Republican acquiescence to increased taxes." The failure of those attempts at accommodation between Obama and Republican House Speaker John Boehner led to the 2011 Budget Control Act, which set caps on federal spending.

From the ashes of the "grand bargain" arose the "Super Committee"--made up of equal numbers of Democrats and Republicans--which would determine the targets of austerity and how much to cut. If no agreement came about from this committee, automatic spending reductions, known as "sequestration," would go into effect.

The result was that that social programs that benefit working and poverty-stricken Americans have faced regular cuts and underfunded budgets incapable of keeping up with the cost of inflation for services they provide or with the growth in population.

These spending caps also mean that any increasing to funding in one program means cuts to funding in other social programs, setting up a competition for resources between health care, education and jobs programs.

So while it's true that there has recently been a minor increase in spending for certain areas of education--such as programs for students who receive special education--along with occasional funding increases in some local municipalities, these boosts pale in comparison to the years of severe cuts in federal, state and local budgets.

The cutbacks have also meant greater competition for funds, faculty and building space between public schools and their rivals, charter schools. The resulting debates and political horse-trading over educational resources puts a quality education further from grasp for working-class Americans.

SCHOOL FUNDING is so inadequate and unequally distributed that courts in many states have found them to be illegal.

Earlier this year, a lawsuit filed by a coalition of school districts caused the Kansas Supreme Court to threaten to shut down the state school system. It ruled that the state legislature's plan "creates intolerable, and simply unfair, wealth-based disparities among the districts."

The Republican-controlled legislature put forward a new bill with bipartisan support that, while still underfunding many programs, redistributes some funds from wealthier districts.

Earlier this month in Connecticut, Judge Thomas Moukawsher ruled on a decade-old lawsuit against the underfunding of public schools, declaring that the state legislature's budget proposal was "defaulting on its Constitutional duty" to give all children an adequate education.

Moukawsher is correct that there are many aspects of the public school system that need to be changed, but in reality, he is giving a blank check to Democratic Gov. Daniel Malloy's "education reform" agenda, which is really about privatizing the system by attacking teachers' unions and promoting charter schools.

The ruling in Connecticut could set a dangerous precedent of tying demands for lawful levels of funding for public schools to further neoliberal reforms designed to weaken those schools.

The irony is that a number of states have ignored court orders to increase school funding--most notably New York, which still owes poor schools almost $4 billion--and teachers' unions, along with other organizations of public school families and educators, have the strongest potential to build the pressure needed to actually enforce these court rulings.

In fact, while most states have followed the austerity lead of the Obama administration, some have been pushed in the opposite direction from the pressure of student protest and teacher union militancy.

In California, years of austerity--between 2009 and 2011, tuition at state schools increased by 32 percent, and nearly $6 billion was cut from the higher education budget--led to an Occupy-inspired grassroots movement in 2012 that pushed for a referendum for a "Millionaire's Tax."

Democratic Gov. Jerry Brown and his allies in the labor movement were able to significantly water down the proposal and include a smaller regressive increase in the sales tax, but the resulting passage of the proposition has added $7 billion in annual revenue--which has allowed California to avoid more education cuts.

The "Millionaire's Tax" movement shows one way to fight against education cuts. Another example came that same year from the Chicago Teachers Union strike, which galvanized support from parents across the city and teachers across the country, and successfully turned back major concessions on teacher pay, benefits and job security.

Months prior to the strike, the CTU leadership trained and organized rank-and-file teachers in preparation, while also spending a couple of years developing strong political relationships with working class communities by demonstrating how the cuts would deepen educational apartheid in Chicago.

These examples help show what types of strategies we need to wage a fight against the new normal of severe annual cuts to public education.