Fed up with the continual anti-choice onslaught, years of ever-increasing legal restrictions and now an emboldened right wing holding rallies at clinics across the country calling for Planned Parenthood to be defunded, pro-choice forces turned out to loudly oppose the anti-choicers and defend the clinics.

SocialistWorker.org contributor Leela Yellesetty, a member of Seattle Clinic Defense and the International Socialist Organization, spoke at a rally at a clinic in Kent, Washington, outside of Seattle, about the importance of rebuilding an uncompromising fight for abortion rights. Here, we reprint her speech, with minor editing for publication.

THANKS SO much to everyone who came out this morning--and, believe me, I am not a morning person--but we all know why we're here.

We are in a state of emergency for reproductive rights. With Trump in the White House and Republican majorities in Congress, the other side is emboldened, and they plan to go for the jugular--defund Planned Parenthood, overturn Roe v. Wade. It's all on the table.

And the restrictions on the state level just keep coming. I just heard that in Arkansas, they passed a law allowing husbands to sue doctors to prevent their wives from having an abortion. A woman in Tennessee was charged with three felony counts for attempting to induce an abortion with a coat hanger.

We know the symbol of the coat hanger--a reminder of untold number of women who died, as many as 10,000 per year, when abortion was illegal in this country--and our slogan is: We won't go back!

Unfortunately, we also know that these attacks aren't new. The people we'll be confronting today have been at this for decades now. They picket outside clinics, week in and week out, with their lies and doctored images of baby dolls smeared with ketchup. They harass and intimidate patients. They follow them. They write down their license plate numbers. Worse than that, they've firebombed clinics and stalked, attacked and murdered doctors. 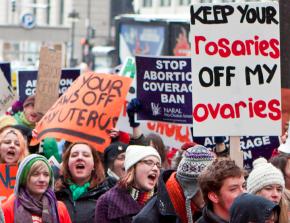 They've built a mass movement aimed at returning us to the Dark Ages. And they've been succeeding with this strategy, despite the fact that they are and have been the minority. They've steadily chipped away at our rights for so long that, for millions of women in this country, abortion is legal in name only.

Well, the time has come to say enough.

AS MANY of you are probably aware, the political arm of Planned Parenthood has been discouraging counterprotests today. Their argument is that protests are stressful to patients and staff, and that we should not politicize the space around the clinic. We agree, but the reality is that space has already been politicized--by the other side.

We in Seattle Clinic Defense are there to block the bigots from harassing patients and to be a positive, supportive presence. In all our years of doing clinic defense, we have received nothing but enthusiasm from clinic staff, patients and community members who have had to deal with this harassment day after day.

Of course, we know today the clinic here is actually closed--which is kind of nice to know that the other side isn't all that brilliant. Yet we are still being encouraged not to counterprotest, on the grounds that it will draw attention to them--that if we just ignore them, they will go away.

They haven't gone away. In decades, they have not gone away. So while we have the utmost respect for the services Planned Parenthood provides, we respectfully disagree with their political strategy.

It's time to stop compromising and apologizing. We support all of the amazing services that Planned Parenthood provides, from cancer screenings to birth control, but we must say loudly that we also support and applaud the fact that they perform abortions.

But we don't stop at abortion rights. Reproductive justice is also about right to have children if and when we want them--which means it's about the right to health care and child care and equal pay at decent wages. It's about exposing and eradicating the deplorable campaigns of forced sterilization of women of color. It's about the right to not fear that your children will be shot down by police, or that you will be separated from your children due to immigration raids.

My opinion is that the more we connect the dots, the broader and more inclusive our movement is, the more powerful we can become. We know that the attack on trans people, on LGBTQ people, is part and parcel of a campaign to restore reactionary gender norms in our society. Their fight is also our fight.

And if there's one good thing I can say about Trump, it's that he's a uniter--he's united us in struggle against him.

The Women's March a few weeks ago gave us all a sense of our power when we come together. But this is just the beginning. We need to get organized and keep up the pressure. On March 8, which is International Women's Day--which is actually originally a socialist holiday--there has been an international call put out for a women's strike.

We should see what we can do here, but just the idea of it is so powerful, because the reality is that women's labor, both in the workplace, but also our unpaid labor in the home, is crucial to making this society run. This is at the heart of why the powers that be want to keep women in their place, and it is also where our potential power lies.

There's so much more to say, for now, I encourage you all to get involved, organize and learn more. Check out the International Socialist Organization. Check out Seattle Clinic Defense. Get active in whatever way you're able, but keep it up. I look forward to marching side by side with you today and on many more days to come!