Nicole Colson reports on Donald Trump's plan to slash and burn taxes for some of the wealthiest people and corporations in America--including himself and his family.

EVERYONE KNEW it was coming. And we knew it would be bad. The question was: How bad would the Trump tax cut program be once it was unveiled?

Rushing to announce his plan before the end of his first 100 days in office, the one-page bullet point plan released by the White House was--like most of what Trump has done so far--short on details and long on grandiose pronouncements.

In its press release, the White House asserted that Trump's tax cut plan is "good for the American people." The word they left out was "some"--as in "good for some American people," those with the biggest bank accounts.

Among the most egregious proposals in the Trump proposal are:

Reducing the number of individual income tax brackets from seven to three--paying at rates of 10, 25 and 35 percent;

Slashing the tax rate for both large and small corporations to just 15 percent from the current top rate of 35 percent (which the vast majority of corporations never actually pay due to loopholes and shelters); 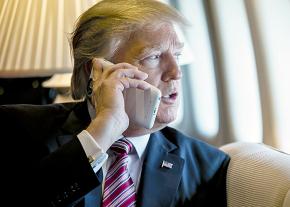 Exempting corporations from paying taxes on foreign profits and instituting a special one-time reduced tax (though the rate has not been not disclosed) to try to lure companies who currently shelter profits in tax havens outside the U.S. (currently estimated at $2.6 trillion).

Lowering the capital gains tax rate--paid primarily on the sale of stocks, bonds or property--from 23.8 percent to 20 percent by eliminating a 3.8 percent tax that currently funds the Affordable Care Act;

Eliminating the inheritance tax, which is only paid by the richest households;

Eliminating the alternative minimum tax, which is also aimed at the wealthy, making it "harder for very rich individuals to game the tax system and pay less tax," the New York Times reported.

IN A press conference outlining the bare-bones plan, Gary Cohn, the director of Trump's National Economic Council, touted the plan as "the most significant tax reform legislation since 1986" and "one of the biggest tax cuts in American history."

If the plan ever becomes law--which is a big "if"--it will almost entirely benefit the already wealthy. Like conveniently enough, the man currently occupying the Oval Office and his super-rich children. As Mother Jones noted, based on Trump's leaked 2005 tax returns:

Without the AMT [alternative minimum tax], Trump apparently would have paid just $7 million in taxes, according to the New York Times--a tax rate less than 5 percent. But the AMT forced him to pony up an additional $31 million that year, raising his tax rate to about 25 percent. Asked at a Wednesday press briefing how eliminating the AMT would impact Trump's tax liability, Secretary of the Treasury Steven Mnuchin dodged the question and abruptly ended the briefing.

Or there's the fact that Trump's plan would create a so-called "pass-through" tax cut for business income that is currently taxed at the business owners' individual income tax rates rather than the corporate rate. Under Trump's plan, the tax rate for this wealth would drop to 15 percent. (Americans for Tax Fairness notes that Trump himself has some 500 pass-through arrangements.)

ANY ONE of the Trump tax proposals would be a massive giveaway to the rich--and a subsequent reduction in revenue that will almost certainly mean future cuts in government spending for services and programs that working-class and poor people disproportionately rely on.

Reducing the number of individual tax brackets from seven to three would cost at least $1.5 trillion in revenue. Dropping the corporate tax rate would cost $3.7 trillion, and repealing the alternative minimum tax would cost $0.4 trillion.

Overall, the New York Times reported, "Trump's proposed changes to the tax code could increase the deficit by an estimated $3 trillion to $7 trillion over the next decade, according to the Committee for a Responsible Federal Budget, an advocacy group focused on reducing deficits."

Yet when he and Cohn announced the plan last week, Treasury Secretary Steven Mnuchin had the nerve to assert that Trump's tax cut plan would "pay for itself" through increased economic growth.

But as Vox's Dylan Matthews wrote, "There just aren't enough deductions in the tax code to make Trump's plan anything other than a giveaway to the wealthy."

There is a huge hole on the revenue side. Trump's advisers have reportedly rejected House Speaker Paul Ryan's proposal for a big new tax on imports, and they haven't yet settled on which, if any, of the loopholes in the tax code they will close. In the absence of any direct revenue enhancers, Trump's advisers are relying on faster economic growth to boost tax receipts and prevent the budget deficit from ballooning.

But that is wishful thinking, to say the least. If there's one thing that history has shown about tax cuts for the rich, it's that they don't translate into increased investment and a booming economy. To use the words of former President George H.W. Bush, that kind of thinking is "voodoo economics," as he famously termed Ronald Reagan's tax cut plan before becoming Reagan's vice president.

TRUMP'S PLAN amounts to "Goldman Sachs populism," Robert Weissman, president of Public Citizen, said in a statement. He added that there "is zero rationale for cutting corporate taxes and zero reason to think that lower taxes will generate more investment."

Because the plan is so short on actual details, the full scope of the giveaway isn't clear.

For example, the incentive for companies that currently shelter their profits abroad to bring that money back to the U.S. would have to be staggeringly high. The tech giant Apple currently keeps much of its earnings abroad, but then borrows money from its foreign subsidiaries to pay dividends and make new investments. As the Times notes, "because the interest paid on loans is also deductible, Apple ends up reaping a second tax benefit."

A lower rate to attract hoarded corporate profits would have be a giant bonanza to make it worthwhile.

All of this is par for the course in America's tax system--which overwhelmingly benefits the rich at the expense of those who rely on government spending and services.

According to Trump and Co., there's no money to fund public television or libraries anymore, no money for public housing, none for education or any number of other important programs and agencies whose budgets are now on the chopping block.

But there's enough to put more money in the pockets of the rich at a time when income inequality is at staggering levels and America is wracked by a deep social crisis that is causing the immiseration of working and poor people.

The U.S. tax system already lets the rich get away with murder while penalizing working people and the poor. And Trump wants make the imbalance even greater.

DEMOCRATS WILL try to make political hay out of Trump's attempt at such massive giveaways to the already wealthy.

But as horrendous as Trump's tax plan is, it has to be pointed out that it was eight years of the Obama administration and the Democrats' own push for giveaways to Corporate America that set the stage for Trump's plan today.

Back in 2013, Barack Obama's "grand bargain" included a proposed tax plan that would have lowered the overall corporate income tax rate from 35 percent to 28 percent and lowered the effective corporate tax rate for manufacturers to 25 percent in exchange for some job creation programs. Despite his earlier promises, Obama proposed the changes without any push to raise taxes on high-income individuals.

As the New York Times noted at the time, the danger was that "while the proposal would raise money for useful purposes in the short run, it would amount to an unjustified corporate giveaway in the longer term"--and that it was "fine in theory but difficult in practice, and especially so because neither the president nor anyone in Congress has specified which tax breaks would be curbed to pay for lower rates."

As Lance Selfa reported for SocialistWorker.org at the time, Obama's push for a "grand bargain" was premised on the idea of accepting cuts to vital social services and entitlement programs like Social Security and Medicare in exchange for a Republican agreement to some limited increases in other taxes:

The point isn't just that...Democrats chase Wall Street money as much as the GOP. It's that they, as American capital's second major party, are committed to carrying out a big-business agenda at the heart of which is austerity that's intended to lower expectations and living standards for the majority of Americans.

This is why Obama keeps coming back to the "grand bargain" and leading Democrats tout their "courage" in tackling the "sacred cows" of Medicare and Social Security. It's why the White House has, for years, seemed oddly passive as the recession has ground down millions of workers who have been out of jobs.

In 2015, Obama proposed his own version of the corporate tax holiday--a one-time, 14 percent tax on the estimated $2.1 trillion in profits piled up overseas by multinationals like Apple, and a 19 percent tax on U.S. companies' future foreign earnings, far below the supposed corporate tax rate.

Yet that wasn't enough of a giveaway for the Republicans and Corporate America.

INEQUALITY IN America is at unprecedented levels. In our new "gilded age," the top 1 percent of households earn an average of $1.3 million a year--more than three times as much as in the 1980s, economists Thomas Piketty, Emmanuel Saez and Gabriel Zucman reported in December.

At the same time, average pre-tax national income per person for the bottom 50 percent of the population was $16,000 in 1980--a figure that hasn't changed substantially in more than 30 years. For Millennials born in the 1980s, there's now only a 50 percent chance that they will earn more than their parents did.

With the chief advocate for the new robber barons sitting in the White House, we can expect the picture to get bleaker unless there is a united, organized resistance that not only rejects giveaways to the rich and demands full funding of the programs and services ordinary people need, but that also holds the Democrats to account as they attempt to make deals with Trump.

The rich should be forced to pay their share--but whether they will depends on whether we can build the kind of fighting movement that rejects the scapegoating of the poor and links up the struggles of working people and others to stand firm against Trump's priorities of profits and power.