A system that entraps the poor

A new book exposes the horrific history of the child welfare system and a troubled present that affects those subject to it and those who work in it, writes brian bean.

"OPENLY DECLARED social war" is how Fredrick Engels--in his early work The Condition of the Working Class in England--describes life in cities under capitalism.

Engels describes how the rich, living amid vast wealth, respond to the horrid situation of poverty not with "indignation at such a social condition, but [with] fear of its consequences, of a universal outburst of that which manifests itself symptomatically from day to day in the form of crime."

Though writing about 19th century England, the same fear of "the dangerous classes" today drives the creation of institutions to police and discipline those who are forced to live in poverty. Don Lash's book "When the Welfare People Come" is an excellent analysis of one such institution: the U.S. child welfare system. 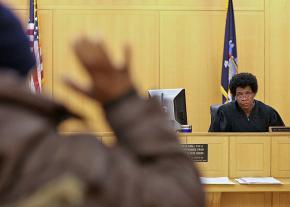 He refutes the common belief that this large system--currently 400,000 children are housed in foster care--exists for the purpose of keeping children safe from abusive families. Instead, Lash argues, the child welfare system exists as a coercive state intervention to discipline and control poor families.

This system plays an additional ideological role for capital in that it reinforces the notion that working-class and poor families are to blame for the conditions of inequality--intrinsic to the system of capitalism--that they are stuck in.

More explicitly, it reinforces a narrative about the situations created by poverty, inconsistent housing or homelessness, food scarcity, inadequate health care and so on that places responsibility on the parents of children for the harm that is actually a consequence of the economic order. Through the hands of the state, this narrative tears apart working-class and poor families.

EVEN BEFORE the first child welfare organizations were established in the latter years of the 19th century, the "family values" of the wealthy included interfering in and disrupting other people's families.

With the enslavement of Africans under chattel slavery, families were routinely broken up and members sold as commodities, while Black women had their own reproductive capacities reduced to reproducing new free labor for slave owners.

After Emancipation, Black families were pressured to have their children "apprenticed" as cheap labor, and the so-called "Black Codes" criminalized vagrancy in a way that forced children into "apprenticeships" which bore more than a few resemblances to slavery.

The institution of child welfare has its roots in charities such as New York's Children's Aid Society, founded in 1853 by Charles Loring Brace. As cities grew, more newly poor people flocked to them in search of jobs. Children--no longer laborers in the home-based small craft economy--were now seen as susceptible to a restive urban working class.

Brace referred to the "dangerous classes" that would "form the great lower class of our city. They will influence elections, they may shape the policy of the city, they will assuredly, if unreclaimed, poison society all around them." They were, in the eyes of the father of child welfare, more dangerous than "European proletaires."

Brace's solution was the "Orphan Train"--shipping children (the term "orphan" is a misnomer, as around half of the children had at least one living parent and 25 percent had both parents) into the frontier regions, away from the concentration of the city.

In other words, the idea of removing children from working-class families was not implemented to alleviate the poverty endangering destitute children, but to indict parents as "responsible" for that poverty, and to break up families with "out-of-home placement."

AFTER THE implementation of out-of-home placement in private and faith-based charities and orphanages, there was a dramatic shift in the 1960s to the system of foster care that we have today, with a series of laws that reshaped New Deal programs.

Questions of racism and poverty that could be alleviated with aid became further obscured by an approach to "treatment and rehabilitation," and the effects of a system of racist inequality were instead reduced to the perceived individual failings of families. Lash describes the consequences:

So a parent doesn't need child care; she needs parenting classes. She doesn't need affordable housing or a living wage or adequate income for quality food; she needs budgeting help and nutrition training. If she disagrees with the treatment plan, she's in denial and needs counseling, and if she vehemently disagrees, she may need anger management classes. If there's something she really does need, like addiction treatment, it may not be available without a long wait, and it may be in a program that can't accommodate parents.

Thus, the child welfare system was organized not around alleviating harmful material conditions, but pathologizing poverty.

This has had a particularly cruel impact on Black and Native children. In a system where they are more likely to face poverty and which utilizes racist justifications to explain inequality, Black and Native families face greater surveillance, intervention and disruption by the state.

Both these demographic groups are represented in foster care at double their percentage in the wider population of U.S. children.

Lash also shows how such mechanisms caused further brutality in Native communities with the system of "boarding schools" used in the late 19th and 20th centuries--where Native children were essentially kidnapped by the state and their families broken up as part of a policy designed to "kill the Indian" in the child, as one proponent put it.

This terrible history underlines the extent to which institutional policies and structures are driven at the root by capitalism's interest in disciplining poor families, and not merely bias.

IN ADDITION to exposing the history of the child welfare system, "When the Welfare People Come" excellently demonstrates how the experiences of both those who encounter the system and those who work in it are shaped by its ultimate function. To underline the point, Lash intersperses his chapters with narratives from an array of individuals on both ends.

With great sensitivity, Lash demonstrates how the child welfare system conditions the choices of well-meaning individuals who work in it. His book is clear that the horrors he depicts are not to be blamed on the individuals, but on a system that doesn't actually to alleviate the conditions it claims to tackle.

In this way, the book is an intervention pointing the way toward the need for more transformational societal change to ensure that children are kept safe--and toward the struggle for real reform.

One of the grim ironies of the child welfare system is that instead of removing the conditions and stressors in families that increase the possibility for maltreatment, this potential harm is traded for the definite harm that occurs from wresting a child from their family.

Lash notes statistics showing, for example, that the rate of fatalities from abuse is actually higher in foster home environments--and that sexual abuse is more commonly reported by women in foster care than in family placements.

Being stripped away from parents is traumatic, but consideration of this is often sacrificed. For example, the protocol used in Illinois to evaluate the risk for children in families states that an unmarried romantic cohabitant living in the home is an increased risk--but the trauma of removal or the danger of foster care is not.

Furthering his critique of the system, Lash points out that foster parents also are not the source of the problem.

While there are some examples of foster parents mistreating children or misallocating funds, Lash notes that the small stipend to subsidize the cost of caring for foster children doesn't compensate foster parents for the value of their labor, rent or a mortgage.

Meanwhile, the systems that monitor and ensure foster parents carry out their volunteer tasks often have executives, lawyers and public administrators with exorbitant salaries. For example, total annual compensation of the CEO of the Children's Aid Society is $676,424.

LASH'S CHAPTER on "Toiling Inside the Bureaucracy" bears special notice.

In it, he points out how the system puts many social work professionals, in their interactions with children and families, in the position of being "street-level bureaucrats," more beholden to the interest of other institutional actors than the parents and children they are supposed to serve.

Lash also points to the possibility of radical reform--and tells the story of struggles within the profession that attempted to remake it.

From the "settlement house" movement at the turn of the century that advocated for community advancement as opposed to providing charity; to the rank-and-file movement of the Depression era that fought for demands beyond what the New Deal provided; to the Radical Association of Social Workers and the militancy of the 1960s and '70s, Lash shows how social workers mobilizing themselves through struggle and as workers has been key to attempts to reform the system.

We are, quite simply, being taught to identify with prisons and asylums, with the welfare departments and the urban renewal authorities and we therefore develop a "learned incapacity" to perceive our own interests or those of our clients. It is a remarkable achievement, reminiscent of the era of industrial paternalism and company unionism, when many workers were induced to identify with their employers. But assembly line workers have since learned that General Motors is not "their company." We have yet to learn that lesson.

My one criticism of the book is that for myself--and, I imagine, for others with experience in the field--the absence of more discussion about child abuse was somewhat glaring.

While Lash does importantly show that the majority of contact with the system is about instances of neglect, and not more egregious instances of extreme physical and sexual abuse, I think there is more to be said about such cases.

Lash does mention that having an approach that doesn't pathologize poverty would "leave the system better equipped to respond to the remaining cases...that warrant removal." But the book would be improved by a more involved discussion about how abuse arises in relation to the pressures of life under capitalism--and to how a trauma-informed approach could address more severe situations of physical and sexual abuse of children.

Overall, however, "When the Welfare People Come" is an essential read for anyone who works in, with or has contact with the child welfare system.

It very convincingly critiques the problems with that system and connects it with the need to abolish the idea of parental responsibility for childhood poverty. It also shows how the fight for reforms of the child welfare system connects to the need to transform the larger system of inequality--to build the struggle against capitalism and for socialism.

This liberatory project is one that--as Lash notes, drawing from the work of the Russian revolutionary Alexandra Kollontai--would ensure a society to "provide the material needs of children, and the benefits of freely available child care, family meals, community laundries and other supports."

This would allow for families--which under capitalism are places of both solace and terror --to take on new, richer forms under a different kind of society, free from exploitation and oppression.