Luke Pickrell reports on the recent promotion of two police officers who should have been fired for trying to cover up a massive sex trafficking ring among Bay Area cops.

IN THE wake of a horrifying scandal last year in which 20 different cops were caught extorting sex from a teenage girl, Oakland's Democratic Mayor Libby Schaaf vowed to "root out what is clearly a toxic, macho, culture" in the Oakland Police Department (OPD).

Now we know that Schaaf seems to have a different definition of cleaning house than most of us: giving promotions to the officers who worked to destroy evidence and cover up the investigation.

In June 2016, DarwinBond Graham and Ali Winston of the East Bay Express exposed the trafficking of a 17-year-old sex worker who went by the name of Celeste Guap. Guap was passed between at least 14 OPD officers, three Richmond cops, four Alameda County sheriff's deputies and a federal officer.

"Three Oakland police officers committed statutory rape of Guap when she was underage," reported Graham and Winston. "By the state's legal definition, they engaged in human trafficking. The victim says every law-enforcement agent who had sex with her knew she was a sex worker." 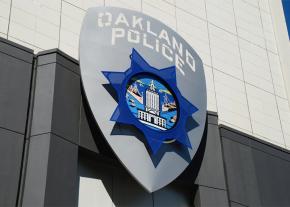 THE NEWS led to the firing of Oakland's police chief, and the quick resignations of his two replacements as the scope of the scandal continued to grow. The OPD and Mayor Schaaf, who called the department a "frat house," scrambled to maintain order and protect the image of a notoriously criminal police force.

Four Oakland cops have been charged with crimes ranging from felony conspiracy to misdemeanor prostitution, and four Richmond cops have been fired. Last month, the Oakland City Council voted to settle with Guap for $989,000.

But whatever effect those actions might have had to communicate that city officials are concerned with more than the OPD's image evaporated when the East Bay Express reported on the promotion of John Lois and Roland Holmgren, two of the three senior personal overseeing the department's internal investigation of the Guap case.

Lois and Holmgren worked hard to cover up the OPD's crimes, intimidating Guap into deleting evidence from her phone and ending the investigation after one week.

Shortly before the promotions, John Burris and Jim Chanin, two attorneys who won federal oversight of the OPD in 2003, filed a brief calling for disciplinary action against the OPD for the Guap scandal and cover-up.

"There is no evidence," Burris and Chanin wrote, "that any of the officers engaging in this behavior, or any of the supervisors who observed it and apparently failed to report it, stop it, or discipline their subordinates, were ever investigated, and if appropriate, disciplined by the Oakland Police Department."

Burris and Chanin recommended that those in charge of the department's investigation of the Guap case to be held in contempt of court. Instead, they've been rewarded.

THE PROMOTION of Lois and Roland in the face of overwhelming evidence against them mirrors the acquittals of criminal cops across the country.

Last month, Jeronimo Yanez, the Minnesota cop who killed Philando Castile in front of his partner and her daughter, was given $48,500 in severance pay from the St. Anthony Police Department. A month earlier, Tulsa cop Betty Shelby was acquitted for the execution of Terrance Crutcher.

On the morning of July 14, Bay Area activists who are determined to fight for police to be held accountable for their crimes, rallied outside the Greek Orthodox Cathedral, where Schaaf, police chief Anne Kirkpatrick and much of the department were gathered to celebrate the promotions of several officers, including Lois and Holmgren.

The protesters, who included members of the Anti Police-Terror Project, PUEBLO Oakland, and the Coalition for Police Accountability--held signs that read “Chief and Mayor promote 'good old boys’,” “Jail predator police,” “If you knew, your hands are bloody” and “Are my children next?” Many passersby, including a postal carrier, honked car horns in support.

Schaaf and Kirkpatrick were given particularity sarcastic welcomes by protesters. After the scandal broke, Schaaf made like most liberal mayors and spoke about promoting ethical police behavior and building "trust between the police and the community has been broken in the past."

The arrogant police reaction to the protest only reaffirmed what the promotions of Lois and Holmgren already made clear: the OPD feels no remorse for its crimes.

Cops revved engines and paraded motorcycles around the theater, needlessly blocked off traffic on the small two-way street next to the Cathedral parking lot, and threatened to make arrests. A police wagon was parked some fifty feet from where protesters gathered.

A few cops pulling into the parking lot rolled down tinted windows to laugh at protesters and take pictures, while other attendees made shooing gestures at the crowd.

"They don't care about any of this," said one woman at the protest, "they enjoy it." When a cop staring down the crowd referred to another protester as "pal", the protester responded that the two weren't friends. He was then threatened with arrest.

It is painfully clear that the police are not accountable to the people they oppress. Across the country--be it in the streets of Oakland, Baltimore, New York or countless other cities--police departments a force that enforces the economic, racial and gender inequalities of capitalism upon the masses of working class people.

Occasionally, as in Oakland, the cesspool-like nature of police departments boils up and becomes a scandal. But as the promotions of John Lois and Roland Holmgren demonstrate, we have to keep organizing to win even the most basic measures of justice for the victims of the most brazenly criminal cops.