A power (still) greater than their hoarded gold

Dennis Kosuth reviews a new book by Kim Moody that argues that changes in 21st century capitalism give workers even more potential power--if they organize to use it.

IF YOU'RE tired of watching Trump waltz away from one political blunder after another, and wonder if it will ever end, put your social media news feed on mute and read Kim Moody's latest book On New Terrain: How Capitalism is Reshaping the Battleground of Class War.

While the book doesn't predict when our side will fight back, it does a marvelous job of spelling out how fundamental the U.S. working class remains to making social change.

The decades-long one-sided class war has been devastating for working people, and begs the question about our ability to simply defend ourselves, let alone ever go on the offensive and remake society anew.

Various theories as to why this has happened have been put forward on the left. Some posit that the eroding industrial base has ended the material basis for labor fightback in this country. This has been coupled with a description of an economic shift to a "service" economy, where fewer workers produce tangible things and more workers are doing non-tangible work.

Accompanying this view is a new social category: the precariat--an amalgam of the words precarious and proletariat that's meant to describe a class of workers that moves from job to job, earns no sick or vacation days, and has few rights.

If this seems like people Marx would simply describe as working class, then you agree with Moody, who writes: "[F]or Marx and Engels, precariousness in the broadest sense was the normal condition of the working class."

Moody does not deny that some things are different from previous periods. But the fact that the economy and the workforce have changed in different ways doesn't automatically mean we need entirely new theories to understand them, let alone new methods to achieve the overthrow of capital.

The power of On New Terrain is its ability to use Marxism to both understand what is different about the current economy, and how workers still possess the collective ability to bring it down.

THE BOOK has three sections, each taking up a major area of study. 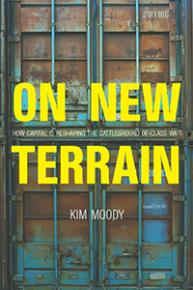 The first part discusses how and to what degree the working class has been remade by capital. The second examines changes in capital and what this mean in regards to class struggle. The final chapters analyze the political terrain and finish with strategies we could take towards altering the status quo.

In the opening chapter, Moody tackles a commonly held belief--that imports and the offshoring of production are the main culprits in the decline of U.S. industry.

This contains an element of truth, but, Moody argues, "a more likely explanation for manufacturing job losses on the scale of the last thirty years or so...is to be found in the rise of productivity extracted after 1980 by the introduction of lean production methods, new technology, and capital's accelerated counteroffensive against labor."

With supporting evidence, he goes on to explain the rise in service jobs as the commodification of what was mostly done by women as unpaid labor in the home. While unpaid social reproduction has by no means disappeared, capitalism has profited by converting this work into low-wage service jobs, still performed mostly by women.

Concerning the debate about how precarious employment is, Moody argues that this misses the bigger change, which is a significant "decline in living standards and working conditions experienced by the vast majority of this class." The rich have gotten richer not just by paying less in wages and benefits, but also by having us work harder and longer.

Moody finishes this section by describing how the composition of the working class has shifted in the past 50 years.

The employed U.S. working class is now 35 percent Black, Latino and Asian, and these workers are disproportionately concentrated in urban areas. Women now make up 46 percent of all union members. Moody points out that while the workforce is more integrated, racial and gender inequalities persist, and these gaps remain major fault lines in the working class.

Despite these fault lines, however, the book highlights that two of the most militant strikes in recent years were led by majority women workforces outside of "core" industries: the month-long Pennsylvania Association of Staff Nurses and Allied Professionals strike against Temple University in 2010 and the 2012 strike by the Chicago Teachers Union.

IN THE second section, Moody presents changes within capital. With careful reading, those who are not regular readers of more advanced economic texts will be able to grasp the main ideas. Moody is not one to make statements without supporting evidence, and for the skeptics, there is plenty of that evidence.

He outlines a general trend of consolidation of capital into larger firms as a product of increased competition between firms. This trend has pushed towards greater capital-labor ratios. In the hospital industry, for example, the increase in the use of technological equipment was 175 percent between 1992 and 2012. This means a greater ratio of fixed assets per worker, which gives workers greater potential power over capital.

Moody quotes Marxist economist Anwar Shaikh: "Capital-intensive industries will also tend to have high levels of fixed costs which will make them more susceptible to the effects of slowdowns and strikes. At the same time, because labor costs are likely to be a smaller portion of their total costs, such industries are more able to tolerate wage increases."

An entire chapter is committed to an analysis of the logistics industry and its position within the current economy. Because they are a key part of the production assembly line of capital, Moody asserts that logistic workers should be considered part of the "industrial core" of the working class, as identified by socialist author Hal Draper.

In the U.S., this group of 3.5 million workers, concentrated in warehouse and transportation districts by the hundred of thousands, are generally urban workers who match the demographics of the cities they live in or near.

"With increased competition, advanced technology, and the logistics revolution, more and more workers have found themselves locked into what amounts to a global supply chain gang," Moody writes. "These chains, however, can be broken. Along with their interconnectivity, their very time-bound tension makes them extremely vulnerable to worker action."

The section is closed with a discussion about what the contours of "a coming upsurge" might look like. Moody looks at the relationships between economic cycles, strike waves, rank-and-file organization and the union bureaucracy, and sees a high level of anger and frustration existing throughout society--with the missing ingredient being grassroots leadership and organization.

THE BOOK'S final section takes up the question raised by that last point: What is the source of the large gap between consciousness and organization?

The Republican Party has succeeded in consistently winning 40 percent of the (shrinking number of) votes of white union household members vote 2000. Moody argues that this is a result not only of the attraction of some workers to Republican politics, but the disgust of many toward the Democratic Party's embrace of the neoliberal program.

Moody describes how big business is tied to government at every level, and how the economic inequality inherent to capitalism is vehemently defended by the state in a myriad of ways. He does a great job in particular of explaining how "tough on crime" is politician-speak for a set of policies embraced by both parties, which have disproportionately locked up and murdered Black and Latino people.

Moody frequently names and condemns racism throughout the book, though he doesn't explicitly elaborate on how racism "divided both to conquer each," as Frederick Douglass succinctly described its usefulness to the slave masters. Fortunately, how capitalism utilizes and deepens oppression is a topic many other Marxists have written on.

The two middle chapters of the final section discuss how the system is rigged against third parties and the important, if not new, question of whether the left should try to take over the Democratic Party to break its commitment to the neoliberal project. Moody titles one of the chapters, "The Democratic Party Cul-de-sac," leaving no ambiguity regarding his take on the question.

Consistent with his method, Moody does not take the question lightly, and ample supporting evidence is provided. He looks at the undemocratic nature of the party's structure and the class forces that hold the purse strings to methodically build a clear case about who the Democratic Party actually represents.

The Democrats' usefulness for the dominant class lies precisely in its ability to pose as a progressive alternative, which underlines how futile any effort to fundamentally change its nature has been and will continue to be. Moody writes:

It is precisely its ability to attract and absorb the leaders and activists of social movements and organized labor that makes it, as some of us still insist, "the graveyard of social movements." When positive changes came...it was due to mass social upheaval. The absorption into Democratic Party politics came mostly as the movements' leaders sought gains through the traditional political process...The party they attempted to influence, however, never fulfilled the demands or hopes of the movement leaders and activists it absorbed.

The book ends with a call to action. Modern capitalism has not taken away our power to organize ourselves, Moody contends, but concentrated it. We should not limit ourselves to the political solutions our oppressors offer as paths forward, but renew the project of building our own structures and organizations on the road to liberating ourselves.

On New Terrain makes a convincing case for revolutionary politics, not on the basis of hope and conjecture, but concrete evidence and history. Read this book, discuss it with others and follow through on its conclusions.