Is Marxism only about exploitation?

Nate Moore takes up one of the most common criticisms of the Marxist tradition.

THE CHARGE that Marxism is "reductionist"--that is, that it privileges "the economic" over the political and exploitation over various oppressions--has been common sense on the left, and in particular the academic left, for some time.

It's true that, historically, many socialists have leaned into the punch with inadequate explanations of the relationship between two basic aspects of capitalism: exploitation and oppression.

What do these terms mean? Exploitation means the theft that all workers suffer by not receiving the full value of their labor--and which they struggle against through strikes and other actions to win higher incomes and other economic benefits.

Oppression means the discrimination, violence and other negative effects suffered by particular groups, on the basis of gender, race, ethnicity, sexual identity, religion or some other factor. 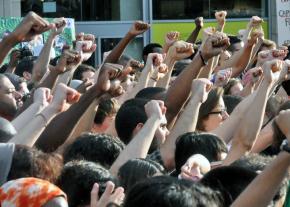 The problem lies with attempting to separate these two aspects of capitalism or put one ahead of the other on the agenda of resistance.

With the resurgence of interest in socialism, socialists who have always opposed and combatted such inadequate explanations have the opportunity to restate what they have always put forward and defended: that the struggles against exploitation and various oppressions are interconnected and shape one another in fundamental ways, and one cannot be won without waging the other.

WHERE DOES the charge that Marxism is reductionist come from?

Marx and Engels sought to understand the driving force of class societies. They argued that the starting point for understanding any society is the ways in which that society organizes its requirements for subsistence (that is, its material needs) and reproduction (that is, the reproduction of the next generation).

The economic base shapes the political superstructure, as well as ideas, that spring from the economic base of society. In "Socialism: Utopian and Scientific," Friedrich Engels explains that Marxism's historical materialist view is that:

[A]ll past history...was the history of class struggles; that these warring classes of society are always products of the modes of production and exchange--in a word, of the economic conditions of their time; that the economic structure of society always furnishes the real basis, starting from which we can alone work out the ultimate explanation of the whole superstructure of juridical and political institutions, as well as the religious, philosophical and other ideas of a given historical period.

This conception is sometimes dismissed as being deterministic--it puts "the economic" on a pedestal and suggests a one-way interaction of "the economic" mechanically shaping all other political, cultural and social aspects of a given society.

But having this starting point of Marxism--that "the economic structure of society always furnishes the real basis" on which other social relationships, political institutions and ideology develop--is not the same thing as making the claim that economic conditions are more important, or that the influence runs only one way.

To take one example, the origin of racism as it exists in modern-day capitalist society is bound with the origins of capitalist industrialization in Europe--above all with the slave system instituted in the colonies of the European powers in the "New World."

As Robin Blackburn describes in his book The Making of New World Slavery, slave labor used primarily for agricultural production in North, Central and South America took the form of Africans kidnapped from their continent and transported to the Western Hemisphere.

This only took place after other forms of coerced labor on a mass basis were tried and failed. Indentured servants from Europe were the first form, but they could only be persuaded to come to the colonies with incentives of land and freedom following the expiration of their contracts.

Indigenous peoples were enslaved by the colonizers, but knowing their Native lands well, they were able to escape--while others died from European diseases in large numbers.

This left Africans--they provided the slave traders and owners with a practically limitless labor pool.

Systematic racism based on skin color didn't exist before this economic development. Overwhelmingly, this system of oppression, both physical and ideological, was invented--to enable and justify the extraction of Black bodies from the African continent, their transportation through the Middle Passage in the most unspeakable conditions, and their barbaric treatment under slavery.

The slave system was eventually overthrown, but racism continued in a new form, providing the means of enforcing inferior status and conditions on the oppressed--and the ideological justification that this order was "natural."

THE PRIMACY of the "economic" in understanding the development of exploitation and oppression and the relationship between them needs to be separated from the question of how we struggle against both.

For example, saying that the "economic" shapes and conditions the dominant ideas of society like racism isn't to say the "economic" is automatically more important in the struggle. As the history of the U.S. working class movement shows, rebellions against racism have galvanized class struggle against the conditions of exploitation.

But understanding that exploitation and oppression are bound together does underline an important point that racism cannot be finally defeated without overturning capitalism, and vice versa.

Thus, the charge that Marxism is reductionist lies in a confusion of two answers to questions: What is the origin and path of development of different forms of oppressions? And how do we struggle against oppression in order to end it?

Because oppression is bound together and integrated so tightly with capitalism, any counterposition of exploitation and oppression is a dead end.

The Russian revolutionary Lenin understood that socialists needed to struggle against exploitation as well as all forms of oppression. He wrote.

Working-class consciousness cannot be genuine political consciousness unless the workers are trained to respond to all cases of tyranny, oppression, violence, and abuse, no matter what class is affected--unless they are trained, moreover, to respond from a Social-Democratic point of view and no other.

The consciousness of the working masses cannot be genuine class-consciousness, unless the workers learn, from concrete, and above all from topical, political facts and events to observe every other social class in all the manifestations of its intellectual, ethical, and political life; unless they learn to apply in practice the materialist analysis and the materialist estimate of all aspects of the life and activity of all classes, strata, and groups of the population.

Those who concentrate the attention, observation, and consciousness of the working class exclusively, or even mainly, upon itself alone are not Social-Democrats; for the self-knowledge of the working class is indissolubly bound up, not solely with a fully clear theoretical understanding...of the relationships between all the various classes of modern society, acquired through the experience of political life.

For this reason, the conception of the economic struggle as the most widely applicable means of drawing the masses into the political movement...is so extremely harmful and reactionary in its practical significance.

The last sentence of this quote is important in relationship to those socialists who can justifiably be called reductionist because their analysis doesn't recognize the interrelationship of exploitation and oppression.

Lenin's point is that the practical consequences of "an exclusive focus on the economic struggle"--or of a deterministic belief that class struggle will automatically take up and solve issues of oppression--are harmful to the working class movement. At the very least, this leads socialists to miss opportunities to champion struggles that will advance the movement as a whole.

On the other hand, those who level the charge of reductionism against Marxism are making the same theoretical mistake of believing that exploitation and oppression can be separated into autonomous spheres that don't interact with each other in decisive ways.

Instead, Marxism sees exploitation and oppression as aspects of an organic whole. Thus, author Keeanga-Yamahtta Taylor makes the memorable analogy that racism has been "baked into" the capitalist pie. Racism is indisputably a main ingredient of the system, but there is no way to extract it from the finished product. The whole pie has to go.