The Trump administration is taking aim at unions and their members in the federal agencies it oversees. Here, a federal worker explains what’s at stake.

I AM a member of the American Federation of Government Employees (AFGE) and a local union rep for my office. I have been a federal employee for Social Security as a claims representative for almost 15 years. I am writing this anonymously, and you will understand why when you read it.

The first two orders listed above directly attack the unions. Agencies are to arbitrarily limit bargaining for contracts or other issues to less than one year.

Previously, if the union or agency felt the other side was not bargaining in “good faith,” they would have had to file an unfair labor practice complaint and have that decided by the Federal Service Impasses Panel. Now, the agencies are allowed to unilaterally implement a contract without the union’s agreement. 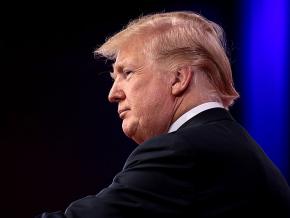 This has already happened at the Department of Education, where a previously bargained contract was thrown out and a new one that stripped 3,900 workers of their rights was unilaterally imposed.

The imposed contract greatly reduces employee leave by combining sick and vacation time into a flat amount of 10 leave days and reduces the amount of official time available to union officials.

Union officials are limited to 25 percent of their time being devoted to union business. The contract also limits what union officials can use official time for — they either have to use unpaid leave or handle issues off the clock. As anyone who worked in a union shop knows, some things can’t wait and need immediate action.

The contract also limits the number of union officials who can use “official time” from 75 to 10.

THE RIGHT to use official time was established in 1962, when then-President John F. Kennedy issued an executive order allowing union officials to conduct union business on government time.

When a union official — anyone from a local rep to a national rep — is conducting union business, they would still receive their pay from the government agency for which they work. Congress cemented this in law in the Civil Service Reform Act in 1978.

This use of official time is already a compromise. Under federal law, federal workers are not allowed to strike. In addition, the executive branch is, essentially, “right to work”: employees in any particular bargaining unit covered by the union aren’t required to join the union or pay dues.

However, the union is legally obligated to represent all bargaining unit employees, whether they are dues-paying members or not. This coverage extends from big-picture things like contracts (since nonmembers are still covered under any collective-bargaining agreement) to local matters. I have had to represent more than a few employees filing grievances who weren’t members of the union.

Since federal employees can’t strike and unions have to represent employees who don’t always pay dues, the Civil Service Reform Act said that union officials could still receive their regular pay, even while acting as union officials.

Additionally, there are some union officials are full-time union workers and others who are on 50 percent union time. This is a very small number of officials and is limited to positions like local or national union presidents and board members.

But the vast majority of federal government union officials (92 percent) can’t use more than 25 percent of our time on union business. And those of us in that category (mostly local representatives or stewards) use much, much less than that.

Two of Trump’s executive orders basically expand what was done at the Department of Education to all federal workers.

AS BLEAK as all that is, it gets worse.

In addition to the direct attack on unions and employee rights to union representation, Executive Order 13839 is an attempt to make it significantly easier to fire or otherwise discipline federal employees. While this order also includes managers and supervisors, it will be used most heavily against bargaining-unit employees.

Under current rules and collective bargaining agreements, agency managers are to use a progressive disciplinary structure. Ostensibly, this is to weed out “underperformers.” Of course, the ability for management to do this already exists, and they use it. However, the rules are an attempt to limit favoritism, and subjective or unfair treatment.

The order explicitly states that agencies should look to termination instead of suspension. It also throws out requirements of equity of punishments and eliminates the requirement that an agency look at the totality of the employee’s work and disciplinary history.

So, two employees making the same mistake could receive two very different punishments. One could have a verbal or written warning, while the other could be suspended or terminated.

Additionally, an employee with an otherwise exemplary record could receive a suspension or termination for a first offense — something that, under the current disciplinary structure, would only be reserved for very egregious infractions, like committing fraud or using one’s position for financial gain.

To top it all off, Trump’s orders bar union reps from assisting or representing employees in filing a grievance.

Most employees know little to nothing about the grievance procedure in general, much less know how to write up a grievance or cite relevant articles in the contract or law. And why should they? That’s the point of having local union reps, such as myself, who do know how to do those things — or at least know who to ask.

Trump also has proposed that federal employees should contribute more to their pensions; that cost of living adjustments (COLAs) be eliminated for current retirees; that pay raises be based solely on merit instead of defined increases based on years of service; and more.

Each one of these proposals deserves its own article. Suffice to say, all are attempts to crush unions in the federal sector, which is in line with the ruling class assault on unions and workers in general.

IT ALSO should be noted that these proposals are not unique to Trump and his administration. Under the Obama administration, federal employees went three years without any pay increases. When those did come, they were a whopping 1 to 1.5 percent.

In my corner of the federal government, the Social Security Administration, we have been hemorrhaging employees as Baby Boomers have been coming of retirement age. This has meant a loss of front-line staff, resulting in increased wait times in offices and over the phone, as well as years-long backlogs on pending initial claims and appeals.

This is especially true for those filing for Social Security and Supplemental Security Income (SSI) based on disability. People actually die waiting for their decisions.

None of this will be helped with pay freezes, hiring freezes or attacks on workers’ right to organize. As is the case with education workers like teachers, whose working conditions are their students’ learning conditions, federal unions are also the ones advocating for better working conditions so that we can provide better service.

Across the board, the Trump attacks will mean fewer people working to protect the food supply, make sure drugs are safe and effective, inspect workplaces for labor law violations, and so on.

As with all other public-sector employees, our mere existence is what the ruling class objects to. Everything we do is labor that is not directly profitable for them.

I wish I could say that federal unions have been inspired by the recent fights waged by education workers and nurses. Currently, AFGE has filed suit to stop the implementation of Trump¹s executive orders and has urged members to call their congressional representatives.

But there is no campaign organizing for solidarity, no reaching out to other unions and no democratic processes to engage workers in their own defense of their jobs and employment conditions. As things currently stand, these won’t be happening any time soon.

Federal unions operate more like professional organizations than democratic organizations led from below (as unions should be). In many cases, these unions also represent the thugs in agencies like Immigration and Customs Enforcement. There certainly will not be any calls from on high in these unions to reach out to progressive or grassroots activists and movements.

To defend federal employees — and to defend the programs and agencies working people actually need — we will need a far different strategy than what is on offer.