LAST WEEK, Facebook shut down dozens of pages and accounts, including some that were publicizing plans for protesting the fascist “White Civil Rights Rally” in Washington, D.C., on August 11, claiming suspicions that the accounts were fronts for Russian agents meddling in U.S. politics.

One of the deleted pages, called “No Unite the Right 2 — DC,” was helping to organize a protest among a coalition of anti-fascist groups. The justification for the deletion was that one creator of the page among several was a page called “Resisters,” which Facebook investigators suspected of being connected to Russian hackers.

As the Huffington Post reported: “In addition to the Resisters, there were five other legitimate co-hosts listed on the ‘No Unite The Right 2- DC’ event page, Facebook officials acknowledged. But because the company was concerned about Resisters, it opted to wipe out the entire event.”

The ability of this monopolistic social media giant to erase “hundreds of hours of online and on-the-ground organizing,” as activists told Huffington Post, is alarming, not only for the perils it poses to organizing and First Amendment rights, but also for its underlying ideology. 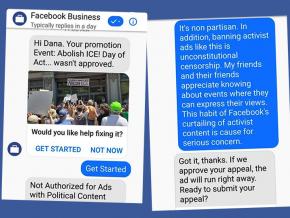 Facebook’s logic is that inflammatory or radical political posts are “divisive,” and therefore, there is a strong likelihood that they are the work of Russian or other foreign actors looking to weaken the U.S. system.

I WISH I could say this was a one-time mistake, but I know different. My own political Facebook posts have been censored — pending my ability to prove that I am a U.S. citizen! The implications of this policy for immigrants exercising their rights on social media are ominous.

I was attempting to advertise on Facebook for a protest in Syracuse, New York, calling for immigrant justice and abolition of the Immigration and Customs Enforcement (ICE) agency, when I received a message that my promotion wasn’t approved, because my page wasn’t “authorized for ads with political content.”

I replied, “It’s not partisan. In addition, banning activist ads like this is unconstitutional censorship. My friends and their friends appreciate knowing about events where they can express their views. This habit of Facebook’s curtailing of activist content is cause for serious concern.”

In response, I was invited to appeal the decision, and when I did so, I received this message:

I’ve put together some information about our ad policies and the actions you can take.

The text and/or imagery you’re using is related to politics or an issue of national importance, based on the definition we’re using for enforcement. However, your Page is not authorized to run these types of ads.

You can learn more about what qualifies in the Ads Help Center.

What to do next:

You must authorize your Page to run ads related to politics or an issue of national importance. To begin the authorization process, please visit your Page’s Settings. You can find more information here. Once you’re authorized to run these ads, choose the option to run this ad with the disclaimer you create in the Authorizations process.

Was this helpful? Let us know.

When I wrote back, I was told that in order for me to post the ad, I would need to take several steps to prove that I was a U.S. citizen. I was directed to the “Ads related to politics or issues of national importance” page, and from there to the section on “Getting authorized” to run such ads in the U.S.

The “ad authorization checklist” there clearly lays out the basis for censorship. To post an ad about anything political, one must be ready to present proof of U.S. residency, including a mailing address, U.S. driver’s license or passport, and the last four digits of a Social Security number.

This practice is horrifying. Not only does it put up unnecessary obstacles to prevent activists from reaching thousands of people with alternative ideas and opportunities for dissent, it also excludes millions of immigrants and non-residents, who have a significant interest in communicating their experiences of oppression through social media.

This is major threat to online organizing around justice for immigrants and refugees, as well as international solidarity campaigns.

FACEBOOK ALSO censored me when I was reposting a daily alert from this website, Socialist Worker. Again, when I appealed, I was told that the content might be “divisive” and sponsored by a foreign power.

The idea that any post on an issue of public importance should refrain from being “divisive” curtails the ability of individuals and organizations on the left to expose and discuss the very real divisions in freedom and prosperity that divide capitalist society — between rich and poor, working class and ruling class, immigrant and “native-born,” and so on.

We on the left want to expose these divisions. To label us as “divisive” for calling attention to these divisions — and to the right-wing thugs determined to inflame them — is not to stand for objectivity or civil discourse, but to clearly side with the forces of inequality and bigotry, while hiding behind the threat of Russian hackers.

What Facebook is calling “coordinated inauthentic behavior” is actually coordinated critical behavior. The censorship unfolding on social media now renders critique and activism as “fake news,” perpetuating the idea that anything partisan or controversial from outside the two-party system dominated by monopolies like Facebook is by definition “inauthentic.”

There is no evidence of an actual conspiracy to block radical political content on the grounds of a new Russian scare. But it also doesn’t seem entirely coincidental that the panic over “divisive” content and Russian influence is threatening activist use of vital social media platforms at a time when Democratic politicians are gearing up to capture activist energy for votes in the coming midterm elections.

This panic is starting to have real consequences, as shown by the shutdown of the “No Unite the Right 2” page.

In the name of keeping us safe, Facebook cut off thousands of people from information about how to link up with others seeking to protect our communities from neo-Nazis — whose murder of Heather Heyer in Charlottesville last year showed that they are a far greater threat than Russian agents.