Teaching the media a lesson about struggle

Danny Katch reviews a book about the 1997 UPS strike and how the corporate media covered it.

OPINION POLLS in recent years have shown that only about 25 percent of Americans "believe all or most of what they see" on the news. Even that contented quarter of the population may be having their doubts after a month in which the networks were revealed to use Pentagon propagandists as war analysts and ABC held a presidential debate that focused more on flag pins than foreclosures.

Despite this widespread cynicism, the absence of large protest movements makes people feel isolated and, in many cases, assume that that if the news keeps lying, it must be because most people believe the lies.

In Outside the Box: Corporate Media, Globalization and the UPS Strike, Deepa Kumar, an activist and professor of media studies, draws a different conclusion from many would expect. Rather than the media changing public perception of the strike, the outpouring of public solidarity for UPS workers actually changed the media perception (or at least the coverage) over the course of the two-week strike.

Kumar demonstrates how a grassroots movement was able to force sections of the media to change their corporate bias and open up a long-suppressed discussion about class and inequality in the U.S.

The UPS strike was no minor event. It was a national struggle between 185,000 Teamsters and a corporation that had risen to global prominence by eliminating full-time jobs and regulating every second of its workers' movements. When the union won and UPS agreed to combine 10,000 part-time jobs into full time positions, it was the biggest victory for U.S. labor in two decades.

Kumar notes that polls showed the public supported the workers by a 2-to-1 margin, making it hard for President Bill Clinton to use the Taft-Hartley Act to stop the strike. UPS vice chair John Alden mournfully noted after the strike, "If I had known that it was going to go from negations for UPS to negotiating for part-time America, we would've approached it different."

This overwhelming support for the Teamsters occurred despite the fact that initial strike coverage was predictably dominated by UPS's perspective (one USA Today editorial was titled "Gripes About Part-Timers at UPS Just Don't Add Up.") In addition to these obvious biases, Kumar explains how the media use a "nationalist narrative" to frame labor issues: strikes are covered not as political conflicts between different classes but as sudden unexpected disruptions--like a flash flood or blackout--that has inconvenienced ordinary Americans, who are interviewed as small business owners or consumers but rarely as fellow workers. 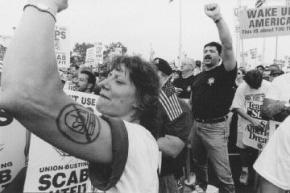 The way that the union was able to win public support in the face of this slanted coverage offers many lessons to activists in the labor movement and beyond. In the year before the strike, thousands of workers were mobilized in preparation through a contract campaign. While this campaign was unevenly implemented around the country, it succeeded in developing many rank-and-file organizers who were able to effectively make the union's case to customers, other unions and community groups, and the media.

Unfortunately, Kumar writes, these workers were only occasionally interviewed by the mainstream media. Even when they were, Kumar's analysis shows that reporters only asked them questions about how they felt while union president Ron Carey was asked questions about what he thought. Fortunately for the strikers, Carey knocked those questions out of the park.

Unlike many union leaders, Carey didn't apologize for the strike or worry about appearing "respectable." Instead, he won wide support by arguing that the grievances of UPS workers were shared by millions of workers struggling to get by in the 1990s "miracle economy." Carey didn't back down from articulating the anger that existed under the surface of American society: "If UPS is determined to rob the future for American working families, the labor movement will do whatever it takes to fight back."

By the second week of the strike, it had become apparent that workers were not crossing the picket line and the public was on the side of the union. While some media outlets such as USA Today and NBC maintained their one-sided coverage, others like ABC, the New York Times and the Washington Post shifted to present a more balanced picture.

Not only did their sources become more evenly balanced between union and company, but they actually began to cover issues faced by workers trying to live on a part-time salary. The strike even opened a rare public discussion about rising inequality as the Washington Post ran articles such as "UPS Strikers Deliver a Message: Rosy Rhetoric Aside, the Boom's a Bust for Many."

There are several other features of Outside the Box that make it worthwhile reading. The opening chapter contains an excellent summary of the employers' offensive over the past three decades. There is also a chapter on media theory that Kumar warns readers in the introduction is meant for an academic audience but that I found quite understandable and useful.

Finally, the appendix contains an interview with Ron Carey that shows what a union leader is supposed to sound like--and why the government witch-hunted Carey out of the union on bogus corruption charges after the strike. Most importantly, Outside the Box contains many lessons for activists in both the labor movement and beyond.

Kumar argues that progressive theorists typically overstate the media's impact on public opinion, which leads some activists to prioritize tightly controlled media events over grassroots organizing--and others to give up entirely. Instead, Kumar makes an effective argument for why social movements should see media strategies not as their primary strategy but as one aspect of the larger goal of organizing large-scale protest and solidarity.