How bad will it get?

The institutions that were supposed to help provide a bailout for the housing crisis now have to be rescued themselves. Lee Sustar explains how two giant mortgage companies sponsored by the U.S. government got to the brink of bankruptcy.

THE EMERGENCY government intervention to support Fannie Mae and Freddie Mac, the government-sponsored agencies that own or guarantee nearly half of U.S. mortgages, is the latest sign of the deepening world financial crisis.

So alarming was the threat of a collapse by Fannie and Freddie that the biggest bank failure in 20 years, at mortgage lender IndyMac, took second place in the business press.

At least, that is, until the stock markets opened on July 14, when investors dumped stocks of other banks rumored to be in trouble. Wall Street analysts predict that as many as 150 more banks could fail in the coming months, virtually all as a result of mortgage-related losses.

But the bigger fear among politicians and investors was the liquidity crisis of Fannie and Freddie, the twin engines of the U.S. mortgage machine. A few months ago, the Bush administration allowed the two companies to reduce their capital reserve requirements to enable them to buy or guarantee $200 billion in mortgages.

With Wall Street investment banks stuck with housing-related losses and reluctant to buy mortgage-backed securities, the government pushed Fannie and Freddie even further into the role of picking up the slack. This, the argument went, would induce banks into making mortgage loans, thereby shoring up the collapsing housing market. 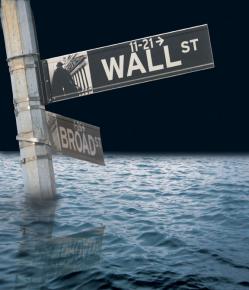 Meanwhile, the Democratic-controlled Congress raised the limit on the size of the loans that Freddie and Fannie are allowed to guarantee from $417,000 to $729,750 in 224 high-cost markets.

In the past, the two companies had been banned by Congress from purchasing or guaranteeing such jumbo loans, in part because Wall Street successfully lobbied to get that lucrative business for itself. But once the credit crunch hit, the investment banks that previously viewed Freddie and Fannie as rivals now demanded their help.

Thus, in entering the jumbo loan market, "Freddie said it will finance up to 90 percent of a property's value, giving an instant source of liquidity to Wells Fargo Co., JPMorgan Chase & Co., Citigroup and Washington Mutual Inc.," the Wall Street Journal noted then.

But instead of easing the crisis, Freddie and Fannie have been nearly overwhelmed by it.

The decline in the companies' stock prices by 45 percent in one week reflected investors' fears that the companies had an insufficient amount of capital reserves to compensate for losses resulting from foreclosures. The two companies have $81 billion in capital reserves--but that's just 1.58 percent of their $5.1 trillion of investments and loan guarantees. Fannie has lost $7.2 billion since the middle of 2007, and Freddie has lost $4.6 billion over the same period.

For more background on the worsening state of the economy, see Joel Geier's "More than a recession: An economic model unravels," published in the International Socialist Review.

In "Reverse Robin Hood," Dean Baker of the Center for Economic and Policy Research explains how plans in Congress for housing "bailouts" will take money from the poor and give it to rich bankers.

A new Economic Policy Institute report, "A Feeble Recovery," documents the fundamental economic weaknesses of the expansion that preceded this crisis.

To raise capital, Freddie proposed issuing stock worth $5.5 billion. But with share prices so low, this would have diluted the value of existing shares--and accelerated the decline of the stock price.

THE CATASTROPHIC consequences of a failure by Freddie and Fannie--which were created by the federal government to assist the mortgage market, but are run as private companies--meant that some form of government intervention was inevitable. The only questions were what form it would take--and whether it would work.

So on July 13--in a Sunday announcement timed for the opening of stock markets in Asia--Treasury Secretary Henry Paulson declared that the U.S. government would stand behind the two companies.

The rescue consists of three parts: an unspecified expansion of the Treasury Department line of credit to the two companies; authority for the Treasury to purchase shares in the companies to help boost their capital reserves; and the ability to borrow at the Federal Reserve's "discount window" for troubled banks. Paulson also proposed that Congress give the Fed new regulatory powers over the two companies.

It was the second major emergency intervention in four months by Paulson and Fed Chair Ben Bernanke. In March, the Treasury and the Fed teamed up to force the sale of the investment bank Bear Stearns to rival JPMorgan Chase at a fire-sale price--in order to prevent a bankruptcy that could have disrupted financial markets worldwide.

This time, the crisis is even more severe. "Freddie is insolvent, and Fannie is running on fumes. They're going to end up being nationalized," Len Blum of the investment bank Westwood Capital told Reuters. "The entire financial web depends on them. If they failed, it would make Bear Stearns look like a picnic."

In fact, Paulson and Bernanke are trying to avoid nationalization--not least because taking Fannie and Freddie onto the government books would increase the U.S. national debt to more than $14 trillion overnight. At the same time, however, the two men were compelled to act decisively in order to preserve the credibility of the U.S. government and the financial system.

According to the most recent data from the Treasury Department, foreign investors own 21.4 percent of U.S. government agency debt--much of it from Fannie and Freddie. An outright collapse of the two companies would not only make these securities worthless, but create a crisis of confidence in U.S. Treasury bonds that finance the U.S. trade and budget deficits.

Letting Fannie and Freddie go under--as some right-wingers proposed on the grounds that the free market needed to right itself--would almost certainly trigger a world financial crash worse than anything since the Great Depression of the 1930s.

As a result, the Fed and the Treasury Department will do almost anything to protect bondholders in Fannie and Freddie. At the same time, Bernanke and Paulson are under pressure to boost the stock prices of the two companies, since shares in Fannie and Freddie are widely held by big mutual and pension funds. If the two companies' stocks continue to slide, it will add to the fall of the stock market generally, particularly for financial institutions.

So Paulson, the former CEO of Goldman Sachs and an official in an administration supposedly committed to free-market solutions, declared that the U.S. Treasury might become a direct investor in Fannie and Freddie.

HOW DID Wall Street get to this point? Right-wing critics of Fannie and Freddie have long claimed that the hybrid status of the companies violates the norms of the free market. Because they are government sponsored, the companies benefit from an implicit guarantee that the U.S. government would stand behind them in any crisis. Therefore, they could hold fewer capital reserves and borrow at lower interest rates than their private competitors.

At the same time, however, Fannie and Freddie were run like private companies for the benefit of shareholders. Their huge size and special quasi-governmental status gave them the ability to manipulate the political system even more effectively than their fully private rivals on Wall Street.

As the Washington Post reported, "a top lobbyist for Freddie Mac held more than 75 fundraisers for members of the House Financial Services Committee in an 18-month period several years ago, raising nearly $3 million, according to records brought to light in a federal investigation. The lobbyist's fundraising dinners typically featured the committee's Republican chairman at the time, Michael G. Oxley of Ohio.

"Those and other activities led to a record $3.8 million fine against Freddie Mac in 2006 for allegedly violating federal election law."

These political connections ensured that even after Freddie Mac manipulated its earnings statements in 2003 and Fannie Mae did likewise in 2004, there were practically no consequences.

"For years, anyone warning that Fannie and Freddie should beef up their financial positions was ridiculed or run over by the lobbying machines these companies kept oiled and close at hand," wrote the New York Times' Gretchen Morgenson. "So their lucrative arrangement remained the same: business as usual, with all its riches, was the goal. After all, wasting money by inflating their cash cushions would just crimp their style."

Even the market-fundamentalist Wall Street Journal editorial board argued that the U.S. government is better off making direct investments in the two companies rather than simply loaning them more money.

"We haven't suddenly become socialists," the Journal explained. "What taxpayers need to understand is that Fannie and Freddie already practice socialism, albeit of the dishonest kind. Their profit is privatized but their risk is socialized. We're proposing a more honest form of socialism, with the prospect of long-term reform."

When the Wall Street Journal calls for an "honest form of socialism," you know the crisis is deep.

We were told a year ago that the mortgage crisis was "contained" to sub-prime mortgages issued by unscrupulous lenders to working people who couldn't keep up with the adjustable rates. Next, we found out that the bad loans went far beyond the sub-prime market--and that the main players were the biggest names on Wall Street: Citigroup, UBS, Lehman Brothers, Bear Stearns and more. The amount of bad mortgage loans written off so far is $400 billion, and counting.

The result has been a credit crunch that's squeezing the life out of the U.S. economy. But the Federal Reserve can't cut interest rates any further to spur growth without aggravating inflation in food and oil prices. In fact, the latest injection of money into the system to support Fannie and Freddie will likely lead to a further decline in the value of the dollar and increase inflationary pressures.

The Bernanke-Paulson rescue plan may keep Fannie Mae and Freddie Mac afloat. But it won't provide a solution to a financial crisis that looks likely to get much worse.