Barack Obama's calls for Blacks to focus on "personal responsibility" ought to be the subject of a genuine debate, not a media-driven uproar about the caught-on-tape words of Rev. Jesse Jackson.

IN SEVERAL high-profile speeches, Barack Obama has gone out of his way to chastise Black fathers in particular and call for Black people in general to focus on personal responsibility.

The full implications of that phrase, "personal responsibility," ought to be the subject of an intense debate. There ought to be a more serious discussion about the state of Black America and the causes of that state. Unfortunately, since Obama's former pastor dared to speak on the subject and was roundly denounced for embarrassing The Candidate, there has been an absence of public figures willing to disagree on camera.

So in place of a real debate, we get a bizarre, profane utterance of disagreement, available to the public only because a microphone was on that was presumed to be switched off. Yes, I'm referring to none other than Rev. Jesse Jackson Sr.'s caught-on-tape grumble that Obama is "talking down to Blacks," and that he wanted to do violence to the man's genitalia.

This stupid slip (if you can call it that) only serves to undermine any actual criticism of Obama's increasingly conservative talking points and makes it easy for those who want to stifle the discussion, or even just defend Obama's position, to paint any criticism as personalistic--the result of the Old Guard's jealousy of the New.

THE OTHER day I opened my email inbox to find an open letter to Jackson, written by Najee Ali. Ali is executive director of a national civil rights organization, Project Islamic H.O.P.E. I knew something of Najee, having marched with him on several demonstrations when I lived Los Angeles. So I was disappointed to read this vitriolic letter, which spares no effort to smear Jackson and staunchly defends Obama's line.

Ali says he speaks for himself and a "growing number of African Americans" for whom Jackson's comments are the "last straw." And, not surprisingly, he throws in the reverend's face the accusation that Jackson is "jealous that Obama has eclipsed you and both your campaigns for the Democratic nomination by actually preparing to win it as the 2008 presumptive nominee."

Ali attacks Jackson as an opportunist and "ambulance chaser," and points out that back in 1968, he appeared on TV one day after Dr. Martin Luther King's murder with his mentor's blood still smeared on his shirt. True enough--but does that serve to clarify the question of whether Obama is talking down to black people? 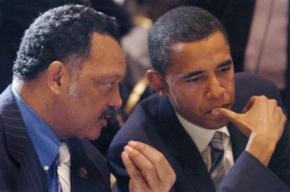 Ali joins in Obama's criticism of Black fathers, taking aim at Jackson as a father:

Obama's recent comments about Black fathers not abandoning their children and accepting moral responsibility in our lives is a lesson you apparently needed to learn when you were younger. If you had, it may not have caused you to cheat on your wife and father a child out of wedlock with a former staffer.

Maybe that's what really bothered you about Obama's message to the church that Black fathers should be responsible for their children; you certainly haven't been.

But even if Jackson was the world's greatest dad, something tells me he would still be in Ali's crosshairs. Ali couldn't attack Jeremiah Wright's moral credentials when Wright spoke out about racism in America, but that didn't stop him joining the tell-Wright-to-shut-up bandwagon. "Wright needs to realize," Ali wrote last April, "that if Obama can win the nomination and presidency, he has the ability to give hope to change and improve the whole world. This is why I hope someone can make the call and tell Rev. Wright to sit down and shut up!"

Actually, what Wright had to say was important and needs to be said louder in America: that for the vast majority of black people, structural barriers still exist.

Jackson's gaffe has, for a time, made it easier to portray this as a "mindset mired in the past." But just two years ago, Hurricane Katrina temporarily silenced Bill Cosby's blame-the-victim routine. Who failed to maintain the levies? Who was slow to mobilize the rescue? Only the coldest hearts dared to blame New Orleans' poor for their predicament.

Today, the mortgage crisis ought to be Exhibit A for the counter-Cosby argument. Here, we have, according to some estimates, the single greatest destruction of Black wealth in a single stroke. The effects of this (and other countless social crises we've faced) on families are fairly predictable, but can hardly be counted as "personal" failings.

For too long, progressive voices have been all too willing to shut up for Democratic Party candidates. The silence of the antiwar movement during John Kerry's presidential bid is one of the most horrendous examples. But when we shut up, it just makes the right wing voices louder. That's how we end up in a lose-lose situation, even if "our" candidates win.

Shutting up on matters of principle may be good strategy for politicians, but it's death for movements. Martin Luther King, facing similar pressures, actually went one step further, saying, "A time comes when silence is betrayal."

When King dared to speak against the Vietnam War, many of his allies in the civil rights movement attacked him. The Southern Christian Leadership Conference (King's own organization!) issued a statement disassociating itself from his antiwar position. The NAACP's Roy Wilkins said, "Civil rights groups do not have enough information on Vietnam, or on foreign policy, to make it their cause."

King's real sin? Embarrassing the Democratic president, Lyndon Johnson. Whitney Young of the Urban League put it plainly: "Johnson needs a consensus. If we are not with him on Vietnam, then he is not going to be with us on civil rights."

What has been particularly refreshing about this election cycle is the willingness of progressives to openly criticize Obama from the left. Actually, tens of thousands of Obama supporters have banded together on his Web site to challenge their candidate for voting to protect the telecommunications companies that participated in Bush's domestic spying program. They refused to shut up--that's a good thing!

Ali admits that Obama is "not above reproach. He is a politician and is fair game to be fairly criticized by you or anyone else. But to personally attack Obama is crossing the line."

But in truth, Ali doesn't disagree with Obama's emphasis on personal responsibility. "Obama is not talking down to Black people; he wants you and other deadbeat dads to spend time and care for your children properly," he writes. "The destruction of the Black family and absentee fathers is a major problem in our community. It's a problem that King spoke out and fought against. Forty years after King's murder, I can see why King didn't trust you. If you can't and won't sincerely help Obama in this historic run, then at least stop attacking him."

ALI'S ATTITUDE that Obama is saying the right thing probably reflects the views of a lot of people, many Blacks included. After all, where on TV or any other part of the media can you hear any other explanation for the state of Black America besides the personal responsibility angle? We've been bombarded with these conservative ideas for the last 40 years.

The idea that the pathological Black family--not poverty or racism--is the source of Black problems became the unofficial line of the U.S. government in the mid-1960s. The Black movement had put the establishment on the defensive, arguing that the situation of Black people was a social responsibility.

Unable to continue to claim that Blacks were genetically inferior, politicians started promoting the idea that Black people were culturally inferior. Daniel Patrick Moynihan, a liberal Democrat who became a darling of the Nixon administration, first made this argument in what became known as the "Moynihan Report."

The right wing loved his logic--why fund public services or anti-poverty programs or desegregate the schools if the real problem is poor Blacks themselves? Moynihan, like Nixon, saw the Black movement as a threat to law and order. He worried that the social movements were hurting the morale of the military forces in Vietnam and lamented the "erosion of the authority of the institutions of American society" in general.

The whole idea of refocusing attention away from social responsibility and toward personal responsibility was a conscious strategy promoted by the enemies of the civil rights movement. Cleverly, the excuse for rolling back the gains of the movement was dressed up in language that sounded like genuine concern for black people.

King also talked about the state of Black families. But he saw the agenda behind Moynihan's line of thinking. In an often over-looked book, Where Do We Go From Here? he warned:

As public awareness of the predicament of the Negro family increases, there will be danger and opportunity. The opportunity will be to deal fully rather than haphazardly with the problem as a whole--to see it as a social catastrophe brought on by long years of brutality and oppression and to meet it as other disasters are met, with an adequacy of resources. The danger will be that the problems will be attributed to innate Negro weaknesses and used to justify further neglect and to rationalize continued oppression.

I can't think of a better way to summarize the conservative obsession with promoting "personal responsibility" in all facets of life (education, health care, housing) than that it has been "used to justify further neglect and to rationalize continued oppression."

Obama's candidacy has raised the hopes of millions of people who are looking for real change. Even so, progressives must resist the pressure to hold their tongues. In the end, history isn't made by politicians, but by movements. And movements need to know the truth.

King, as much a product of the civil rights movement as a leader of it, had an idea of the kinds of changes we need. Forty years ago, he wrote:

If the society changes its concepts by placing responsibility on its system, not on the individual, and guarantees secure employment or a minimum income, dignity will come within reach of all.

His voice, and others like it, needs to be louder.