THE DEMOCRATIC president's nominee for secretary of defense is a Republican known for his conservatism, particularly anti-gay bigotry--and the storm of criticism against the nomination comes from Republicans, not Democrats.

Meanwhile, the president's choice to head the CIA is a one-time architect of torture and rendition programs--and neither Republicans nor Democrats have a problem with him at all.

Welcome to mainstream Washington politics in the second term of Barack Obama--where there isn't even a token opposition to the left of a president who would have been considered, to use his own words, "a moderate Republican" a few decades ago.

Given the record of his first four years in office, it's no surprise when Obama's nominees share more in common politically with the Republicans who ran the White House before him than the tens of millions of people whose votes made him president. But these picks come just two months after Obama won a surprisingly strong reelection victory thanks to an outpouring of support from the party's base constituencies. 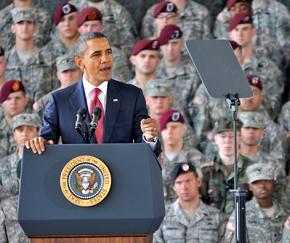 Many of those voters hoped that Obama might become, in his second term, a little more like the progressive they wish him to be. Chuck Hagel and John Brennan are further proof that wishing won't make it so.

Obama obviously doesn't feel obligated in the least to meet the expectations of his supporters nor act on the populist rhetoric he used during the campaign. On the contrary, like the fiscal cliff deal, with its many concessions to Republicans, the nominations of Hagel and Brennan show what Obama does want for his second term: An administration the U.S. ruling class can rely on to more effectively defend and extend American corporate and military power.

The lesson to take from this is an old one, repeated many times before: Without struggle, there will be no progress in the Obama era. The alternative to a world of war and imperialism, grotesque inequality and social crisis certainly won't come from inside the White House or anywhere in official Washington, so it will have to come from outside.

FROM A Washington-insider perspective, nominating former Nebraska Sen. Chuck Hagel to be defense secretary was a savvy move. Obama got to act bipartisan by choosing a Republican for one of the most important positions in his administration, but Hagel is despised by most Republicans as a dreaded RINO--Republican in name only.

That's not because Hagel isn't a staunch conservative. He earned the hostility of party leaders in the mid-2000s when he became one of the first members of Congress of either party to criticize George W. Bush's "war on terror," particularly the disastrous invasion of Iraq. By the time he decided not to run for reelection in 2008, Hagel was on the outs in a party that, he said, had "been hijacked by incompetency--I think that's what has driven the Republican Party right off the cliff."

But Hagel's political trajectory says a lot more about how far the bipartisan political establishment lurched in the 2000s by embracing the invade-first-and-ask-questions-later "neo-cons" who dominated the Bush White House. Hagel belongs to the "realist" wing of the foreign policy establishment, which was shoved aside during the Bush years, but is certainly no less committed to the imperialist project of U.S. political and military dominance over its rivals.

Hagel will be denounced by Republicans in the coming weeks for preferring harsh sanctions against Iran to a military attack, or for making the occasional criticism of Israel--not backed up by any action, of course. But this leaves him squarely within the Washington consensus, not a part of the antiwar movement.

Hagel's best-known act during the Clinton years might be his despicable campaign to defeat the nomination of James Hormel to be U.S. Ambassador to Luxembourg. Hormel was unqualified for this critical position, according to Hagel, because he was "openly, aggressively gay." Hagel apologized for his sleazy attack...in December 2012. "Given that he is under consideration for a presidential appointment," Hormel told reporters, "one can only wonder about the sincerity of the apology."

Immigrant rights activists might remember Hagel as the co-author of legislation in 2006 that countered the notorious Sensenbrenner bill, which sought to criminalize all 12 million undocumented immigrants in the U.S. But Hagel's "compromise" proposed to plunge millions into new border controls, including a border wall, while setting up a three-tier system for the undocumented that would have consigned millions to leaving the U.S. or guest worker status, while providing a highly restrictive path to legalization for a minority.

You won't hear about any of this from Democratic lawmakers--or even liberal organizations or writers, who seem to be keeping quiet about Hagel if they aren't endorsing him. In her blog at the Nation, antiwar writer Phyllis Bennis asked whether Hagel's nomination would "actually help the antiwar left"--and, in a stunning display of contorted reasoning, concluded that the answer is yes.

As for John Brennan, Obama's nominee to head the CIA, he's probably best known as a point of continuity between Democrats and Republicans. Brennan is a career spy who worked closely with the Democratic White House of Bill Clinton, then the Republicans of the Bush era, and now the Obama administration.

Brennan was deputy executive director of the CIA in the early 2000s when the agency was setting up its system of "black sites" and "rendition" to carry out interrogations and torture during the "war on terror." Brennan expressly defended the use of torture techniques other than waterboarding and sung the praises of the CIA's "renditioning" of "war on terror" prisoners to countries like Syria, where any method at all could be used on them.

This record was enough to scuttle his possible appointment as CIA chief when Obama began his first term. Brennan withdrew his name from consideration and served instead as a top White House adviser.

It says a lot about the Obama White House and the Democratic Party that Brennan is now acceptable as a nominee.

Four years ago, Obama was fresh off a campaign during which he repeatedly said he would end the Bush administration's war on civil liberties. But in office over the past four years, he has continued virtually every aspect of Bush-era policy, from keeping the Guantánamo Bay prison camp open to warrantless wiretapping.

Thus, the smart money is betting that Brennan won't face much, if any, opposition within official Washington. As left-wing writer Glenn Greenwald put it at the Guardian website: "Within this change [from the attitude toward Brennan in 2008], one finds one of the most significant aspects of the Obama presidency: his conversion of what were once highly contentious right-wing policies into harmonious dogma of the D.C. bipartisan consensus.

BACK DURING the 2008 election campaign, Obama took the lead among the top contenders for the Democratic presidential nomination in large part because he was the candidate most associated with opposition to the Bush administration's Middle East wars, especially in Iraq. But for anyone who listened closely, it was clear that Obama wanted to redirect the U.S. war machine, not to curb it in any significant way.

Once in office, Obama did his best to refashion the promised withdrawal from Iraq into a redeployment. His plan only failed because the Iraqi government, acting more and more independently of the occupiers, refused to go along with special status for an ongoing U.S. military presence numbering in the tens of thousands.

In Afghanistan, Obama fulfilled his campaign promise to increase the U.S. troop presence. By the high point of the Obama surge, the number of U.S. soldiers deployed to Afghanistan had doubled. Meanwhile, the Obama administration greatly expanded the war outside Afghanistan's borders, in Pakistan in particular--with the new weapon of choice being air strikes by Predator drones.

The Obama White House is also directing a strategic reorientation of U.S. military power toward the conflict that its analysts believe will dominate the coming decades--in Southeast Asia, against the rising power of China.

Both Hagel and Brennan would be useful in the process of reshaping U.S. imperialism along the lines that Obama envisions.

Because Hagel served as an enlisted soldier--he would be the first-ever defense secretary to come from the enlisted ranks--he has greater authority to argue that the U.S. should make more use of diplomacy and other non-military means in international conflicts, while rebuilding the armed forces to be a smaller, more mobile and more lethal force when they do go to war.

For his part, Brennan oversaw the Obama administration's escalation of drone warfare. That and his many years at the CIA makes him ideal for, as the Washington Post wrote, "an administration that favors covert action--including Predator drone strikes on al-Qaeda targets and cyber-sabotage of Iran's nuclear plants--over conventional force."

Somehow, Obama still retains the lingering reputation of being antiwar for many people--probably because of the comparison with the bloodthirsty Republicans. But his record as commander-in-chief can't be described as antiwar in any way. Obama stands for a different strategy for U.S. imperialism from the Bush years, and both Hagel and Brennan are associated with critical aspects of how Obama has sought to renovate and rebrand the war machine.

So the partisan battles over their nominations reflect a debate within the ruling establishment between two different programs for how to run the U.S. empire. What they don't represent at all is a conflict between Republican militarists and Democratic advocates of a more peaceful foreign policy--or one under which, as Phyllis Bennis would have it, the "antiwar left" is in a better position to press for its goals.

On the contrary, given Obama's success in his first four years in undoing at least some of the damage done during the Bush years, U.S. imperialism under the command of Obama, Hagel and Brennan would likely be more effective in safeguarding U.S. dominance against its rivals and challengers--and therefore more effective in inflicting suffering, oppression and death around the world.

We can leave it to the foreign policy establishment to debate whether the "Obama doctrine" is preferable to the "Bush doctrine" for them. But we can say for certain that this is Barack Obama's goal--to prove that he's a better manager of the U.S. empire than Bush and the neo-cons, not to find ways to make the world more peaceful and just.

Our movements and struggles can't side with one program for imperialism over another--any more than we should choose between two plans for austerity or two strategies to make corporations more profitable at the expense of workers. We need to organize a resistance from below that stands for an independent alternative to Washington's bipartisan policies of war, oppression and injustice.