A cruel display of anti-Muslim hate

Nicole Colson looks at an attack on worshippers at an Ohio mosque--and the role an anti-Muslim DVD may have played in inciting it.

A DAYTON, Ohio, mosque was attacked last week, but police are refusing to label the incident a hate crime.

The attack came September 26--during the holy month of Ramadan--at the Islamic Society of Greater Dayton. As approximately 300 worshipers were preparing for evening prayers, they heard their children, who were in a separate room, begin coughing. Soon, the mosque had to be evacuated, as some worshipers were overcome with fumes.

Worshipper Baboucarr Njie told the Dayton Daily News that he began coughing and had to evacuate the building. "I would stay outside for a minute, then go back in, there were a lot of kids," Njie said. "My throat is still itchy."

According to police, it appears that two men sprayed an irritant directly through a window into a room where infants and children were waiting while parents took part in prayers. One 10-year-old girl, who was helping care for the other children, was sprayed directly in the face.

Police later found a can of pepper spray near the mosque, although a HAZMAT team was unable to determine if that was what had been sprayed. 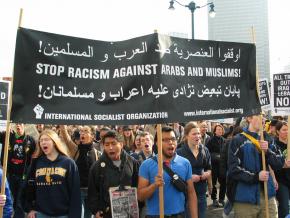 A friend of some of the victims--a mother and her two small children who were in the room where the chemical was sprayed--described the incident in an e-mail to Chris Rodda of the Huffington Post Web site:

[The mother] told me that the gas was sprayed into the room where the babies and children were being kept, while their mothers prayed together their Ramadan prayers. Panicked mothers ran for their babies, crying for their children so they could flee from the gas that was burning their eyes and throats and lungs. She grabbed her youngest in her arms and grabbed the hand of her other daughter, moving with the others to exit the building and the irritating substance there.

The paramedic said the young one was in shock, and gave her oxygen to help her breathe. The child couldn't stop sobbing.

This didn't happen in some faraway place--but right here in Dayton, and to my friends.

Many of the Iraqi refugees were praying together at the Mosque Friday evening. People that I know and love. I am hurt and angry. I tell her this is not America. She tells me this is not Heaven or Hell--there are good and bad people everywhere.

She tells me that her daughters slept with her last night, the little one in her arms and sobbing throughout the night. She tells me she is afraid, and will never return to the mosque, and I wonder what kind of country is this where people have to fear attending their place of worship?

The children come into the room, and tell me they want to leave America and return to Syria, where they had fled to from Iraq. They say they like me...and other American friends--but they are too afraid and want to leave. Should a 6- and 7-year-old even have to contemplate the safety of their living situation?

SO FAR, authorities are refusing to call the attack on the mosque an anti-Muslim hate crime. According to Dayton Police Chief Richard Biehl, "The men didn't say anything to [the girl before she was sprayed]. There was nothing left at the scene or anything that makes us believe this is a biased crime."

But as several commentators have noted, the attack came in the same week that millions of copies of a right wing-produced anti-Muslim DVD were released in Ohio and elsewhere.

Obsession: Radical Islam's War Against the West is a pseudo-"documentary," produced in 2006, by the right-wing Clarion Fund. The film openly compares Islam today to Nazism prior to the Second World War, showing images of Nazi rallies intercut with images purportedly of Muslim children being exhorted to be suicide bombers. The film features prominent right-wing Islamophobes like Daniel Pipes and Alan Dershowitz, among others. Last year, arch-conservative David Horowitz screened the film on several college campuses as part of his "Islamo-Fascism Awareness Week."

During the last two weeks of September, the Clarion Fund--which has run at least one article supporting John McCain's presidential bid on its Web site--paid to distribute more than 28 million copies of the DVD through 70 different newspapers in 14 "swing" states, including Florida, Pennsylvania, Wisconsin and, of course, Ohio.

Shamefully, even some so-called "liberal" papers like the New York Times have distributed the DVDs to subscribers, arguing that because they were sent as paid advertisements, the newspaper isn't responsible for the content.

Jim McClure, vice president of display advertising for the Raleigh News and Observer, was quoted in the paper's "Under the Dome" politics blog comparing the DVD to common samples of household products that are sometimes sent out: "'Obviously, we have distributed other product samples, whether it's cereal or toothpaste,' he said. He declined to say how much the agency paid."

Except, of course, what's being "sampled" in this case is misinformed bigotry. Angry subscribers wrote back to denounce the decision. As one commented:

A box of cereal? Toothpaste? Does a box of cereal or a tube of toothpaste encourage me to look with hatred and suspicion on my law-abiding neighbors who have a different religion than mine? Does cereal and toothpaste lead to pogroms, religious harassment, fear and intimidation? The trailer for this video is about hate, pure and simple, and shows the video has only one goal--to instill fear and hatred of neighbor against neighbor.

If I receive this DVD in my paper, that day, after 22 years of receiving the [News and Observer], will be the last day of my subscription.

CLARION FUND spokesman Gregory Ross has denied that the DVD is design to influence the election, telling the Los Angeles Times that it is simply "a reminder that a 9/11 could happen again, and we need to remember the past."

But Ibrahim Hooper, president of the Council on American-Islamic Relations (CAIR), told the LA Times there were some reports that DVD recipients in Ohio also received automated phone calls referencing the film, saying, "We hope you take it into consideration when you go into the voting booth."

A multi-faith coalition called "Hate Hurts America" has launched a website to counter allegations made in the DVD. CAIR is also asking the Federal Election Commission to investigate Clarion for possible violations of campaign finance law.

In Oregon, approximately 70 protesters turned out September 30 at the offices of the Oregonian to denounce the paper for distributing the film as an advertisement. As Rev. Chuck Cooper, of the progressive Christian community Micah's Village, told the Associated Press, the newspaper has a moral obligation "to inform, not misinform." He added that the paper should donate any profits from the advertising to charity. CAIR is also suggesting that people who receive the DVD break it in half and send it back.

Despite the reluctance of police to label the attack on the Dayton mosque a hate crime, there should be no doubt that the wide distribution of hate-filled propaganda like Obsession has been a factor in at least some attacks on Arabs and Muslims since September 11--including verbal and physical assaults, as well as arsons at mosques and high-profile incidents in which Arab and Muslim passengers have been barred from airplanes.

As the e-mail sent to the Huffington Post's Chris Rodda noted:

Did the anti-Muslim video circulating in the area have something to do with this incident, or is that just a bizarre coincidence? Who attacks women and children?

What am I supposed to say to them? My words can't keep them safe from what is nothing less than terrorism, American style. Isn't losing loved ones, their homes, jobs, possessions and homeland enough? Is there no place where they can be safe?