Lee Sustar explains that the mayhem in the markets this week is symptomatic of a deeper crisis--and the leaders of the most powerful governments aren't sure what to do.

IT WAS the worst week ever for Wall Street and the world financial system--a global stock market meltdown that wiped out more than $6 trillion of wealth and had even cautious media commentators musing about the failure of capitalism and the possibility of another Great Depression.

Even Congress' passage of the $700 billion bailout to the banks, sold as a surefire solution to the crisis, was spectacularly unsuccessful in restoring market confidence. Nor could the coordinated efforts by central banks in the industrialized nations to lower interest rates and make hundreds of billions of dollars available in new loans budge the frozen credit markets--lending between banks and to businesses remained at a standstill.

For working people, the threat lies not only in the wipeout of retirement funds, now that traditional pensions have been replaced by 401(k) plans and other programs tied to the stock market.

The worse nightmare is what happens if the banks continue to clamp down on lending, even to other banks, because of the entirely justified fear that the next borrower could go bankrupt. If loans to businesses remain on ice, then there may not be money to pay suppliers, or meet next week's payroll--and the crisis will take a further lurch downward with mass layoffs and closures. 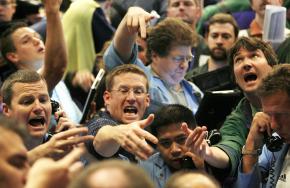 BY THE week's end, the assumptions of free-market, neoliberal ideology--the foundation of U.S. politics for last three decades--had been totally discredited.

Gone were the clichés about how "the free market knows best," and that "government regulation stifles capitalist dynamism and growth." Instead, the same people who whined a month ago about the nationalization of mortgage giants Fannie Mae and Freddie Mac and insurance company AIG as creeping "socialism" now advocate the most sweeping government intervention in the economy since the Great Depression--and fast.

"The government needs to inject capital directly into banks," wrote Wall Street Journal columnist David Reilly. "The government also needs to force banks to recognize losses they have so far ignored, require banks to provide fuller disclosure of holdings, push banks to lend to one another again, euthanize weaker banks while helping strong banks get stronger, guarantee deposits and backstop a portion of bank credit.

"Above all, the government needs to tell banks that they have to take part in a systemic solution. The time for negotiation by banks is over."

Take a moment to consider that statement: A top writer for Corporate America's leading newspaper is calling for the federal government to seize control of the banking industry, expose the worthless assets on its books, insure all bank deposits in any amount, order lending between the banks to take place, and force unwilling executives to accept mergers--and even liquidation.

Put simply, the Wall Street Journal is calling for the nationalization of the banking system. A few weeks ago, you wouldn't have seen this proposal outside the pages of SocialistWorker.org and others on the left.

Now, though, nationalization is the latest strategy of the increasingly desperate ruling class of the advanced industrial countries in the Group of Seven (G7).

The U.S. initially rejected Brown's strategy, sticking with the so-called Troubled Assets Relief Program (TARP), the $700 billion cash-for-trash program approved by Congress and signed into law by George Bush little more than a week ago. Under the TARP plan, the Treasury Department will buy up the banks' bad debts and failed investments that can't be sold at any price.

But as Wall Street staggered through a weeklong decline in the stock market--the Dow Jones Industrial Average ended the week 39.4 percent lower than its record high a year ago--Treasury Secretary Henry Paulson changed his tune.

Paulson announced that Treasury would also use the bailout money to buy stocks in banks directly. Paulson, a former Wall Street CEO, concluded that direct investments is the only way to inject capital into banks fast enough to revive lending and boost stock prices.

This and other forms of government intervention in the economy will be the topic of an urgent meeting by G7 finance ministers on October 11-12 at the annual meeting of the International Monetary Fund and the World Bank. If Paulson and his counterparts can't come up with a plan for even more far-reaching government intervention--such as a virtual guarantee of all deposits and transactions by the most powerful states in the world--then the panic will only get worse.

European stocks ended the week down 22 percent, their worst ever. Nearly every major stock exchange in the world was battered, and stock markets in Indonesia and Russia are closed indefinitely.

But it's the U.S. that is dragging the rest of the world down. "The U.S. and advanced economies' financial system is now headed towards a near-term systemic financial meltdown," wrote New York University economist Nouriel Roubini.

Unless credit markets revive, what was already shaping up to be a bad world recession could become far worse, Roubini argued. "At this point, severe damage is done, and one cannot rule out a systemic collapse and a global depression. It will take a significant change in leadership of economic policy and very radical, coordinated policy actions among all advanced and emerging market economies to avoid this economic and financial disaster."

The problem is that while the U.S. is the only government capable of spearheading this effort, there's no capable leadership. It's the Bush administration's erratic and inept policies that threaten to turn an acute financial crisis into an unthinkable catastrophe.

TO THE Neanderthals of the Republican right, even ineffective government intervention is "socialism." But nothing could be further than the truth. This is financial state capitalism, carried out by the same people who used pro-market ideology to justify a three-decade-long transfer of wealth from workers to a tiny minority of the superrich.

In the 1980s and 1990s, Republicans and Democrats collaborated to deregulate the banking system and business generally, arguing that this would stimulate capitalist growth and benefit everyone. Now that their own interests are on the line, though, they're running to the state for protection.

However, their aim remains the same: the maximization of profits. If it's necessary for widespread government intervention in the economy to enable capitalists to keep on exploiting workers, the capitalists are all for it. Whether banks are run privately or by government bureaucrats, they're essentially parasitic institutions in relation to the productive, "real" economy.

A genuinely socialist solution to the crisis would be fundamentally different. The banks' functions of allocating investment and credit could be carried out democratically under workers' control, with the aim of meeting human needs. By contrast, in 2007, bonus pay at the then-top five Wall Street investment banks totaled $38 billion--nearly the amount the federal government spent on the State Children's Health Insurance Program in its first 10 years.

These obscene Wall Street bonuses, we were told, were justifiable in view of the success of the U.S. economy. Now we know differently.

The Wall Street fat cats are only the most visible members of a capitalist class that has thrived on the backs of working people. The wealthiest 1 percent nearly doubled its share of annual national earnings, from 7.3 percent in 1979 to 13.6 percent in 2006, and the richest 0.1 percent increased its annual earnings by a staggering 324 percent from 1979 to 2006, to more than $2.2 million. Meanwhile, 26.4 percent of U.S. workers receive poverty wages, and since 2001, workers' productivity grew by 11 percent, while real wage gains (after inflation) were zero.

As a result, U.S. society is about as unequal today as it was in the 1920s, on the eve of the Great Depression.

Now, as the prospect of another severe economic crisis looms, big capital finds itself discredited and forced to lean on Democratic politicians like Barack Obama to rebuild their credibility of the system. Some concessions may be tolerated--limits on CEO pay at companies where the government owns shares, for example. But as in the 1930s--the era of sit-down strikes and a rebirth of unionism--it will take organization and struggle to really shift the balance of forces in workers' favor.

But much has already changed. U.S. politics will never be the same. There is a political opening--indeed, a great urgency--to discuss and plan how working people can respond to this crisis. In that debate, it is important to put forward a vision of a different kind of world, free from the inequality, chaos and crisis of capitalism--a genuine socialist alternative.