Out, proud and fighting

Sherry Wolf explains that Milk helps set out the history of the LGBT struggle at an important time for the movement.

MILK PORTRAYS the man Harvey Milk as he truly was--not a cartoon character hero, but a real human being who was shaped by events and people around him, and used his wit, flair and passion to give expression to the gay outrage of the 1970s.

Sean Penn's portrayal of Milk, the first openly gay elected official in 1977, is a stunningly intense political knockout at the very moment the LGBT struggle could use it most.

For a change, protests, organizing and mass outrage in the face of police brutality and discrimination are not the perfunctory backdrop to a soupy tale of individual excellence. Instead, they lie at the heart of the story of a movement and the man who came to symbolize its dynamism and persistence. If there is a smidge of honesty in the Academy of Motion Picture Arts and Sciences, the Oscar is Penn's.

The gay director of Good Will Hunting, Gus Van Sant, hewed closely to author Randy Shilts' biography of Milk. Van Sant worked alongside Milk's activist collaborators, particularly Cleve Jones, in crafting the visual and political accuracy of the time--from San Francisco's Castro Street where Milk had his camera shop storefront that served as movement/campaign headquarters, to the placards and chants of "Civil rights or civil war, gay rights now!"

Socialist Worker readers will get a kick from glancing shots of the red-and-black-fisted Socialist Worker posters hung in Jones' apartment, an attempt to evince the zeitgeist of that era--and perhaps a bit of our own.

The film, like Shilts' The Mayor of Castro Street: The Life and Times of Harvey Milk, shows Milk as a charmingly disarming gay Jewish New York businessman who abandons the closet and Manhattan for the nascent gay hippy bohemia of San Francisco's Castro Street in the early 1970s.

Today's audience is shocked from the start of the film into the realization that well into the 1970s, the police, media and politicians legally tormented LGBT people. The 1960s is often perceived as an era of social upheaval and orgiastic revelry. But for LGBT folks in America, the efflorescence of sexual expression did not begin until the waning months of that decade.

The relative freedoms and social acceptance that millions of particularly urban American LGBT people experience today would have seemed as surreal to Milk's generation as the prospect of an African American president. 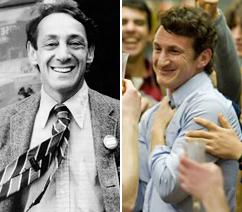 After President Dwight Eisenhower signed the 1953 executive order on the heels of the military's postwar purge of gays, "sexual perversion" was grounds for being fired from government jobs. Since records were shared with private industry, exposure or suspicion of homosexuality could render a person unemployable and destitute.

"Loitering in a public toilet" was an offense that could blacklist a man from work and social networks, as lists of arrestees were often printed in newspapers and other public records.

Most states had laws barring homosexuals from receiving professional licenses, which could also be revoked upon discovery. Sex between consenting adults of the same sex even in a private home could be punishable for up to life in prison, if not confinement in a mental institution, or even castration.

California's Atascadero State Hospital was compared with a Nazi concentration camp and called a "Dachau for queers" for performing electroshock and other draconian "therapies" on gays and lesbians.

THOUGH MANY today perceive the social explosion of gay militancy in 1969 at New York's Stonewall Inn as the event that wiped away official homophobic reaction, the real history is not so swift or tidy. Years of struggle, organizing and occasional setbacks paved the way for Harvey Milk's--and the gay movement's--rise in the 1970s.

In 1974, Teamster representative Allan Baird took the unprecedented step of approaching gay activists and Milk, the self-proclaimed "Mayor of Castro Street," to help truckers win a boycott against Coors beer for refusing to sign a union contract. Not only did Milk participate in a movement to win over gay and lesbian bars and clientele to join the boycott, but they also won Teamster jobs for gays in exchange.

Their organizing efforts were so successful that gays and labor militants eventually slashed Coors' sales in California from 43 percent to 14 percent, spread the boycott to 13 other states, and established links with Latino workers and organizations that endured for future battles.

Her Save Our Children campaign in Dade County, Fla.--in response to anti-discrimination legislation--set a combative tone with Bryant's verbal salvo: "What these people really want, hidden behind obscure legal phrases, is the legal right to propose to our children that theirs is an acceptable alternate way of life...I will lead such a crusade to stop it as this country has not seen before."

Save Our Children was not only successful at winning over a majority of voters to repeal the Dade County pro-gay legislation, but went on to wage successful repeal campaigns in St. Paul, Minn., Wichita, Kan., and Eugene, Ore.

The efforts of newly formed LGBT groups organizing alongside labor unions in California, with the creative spokesmanship of Milk, now a newly elected San Francisco Supervisor, stemmed this flurry of setbacks.

In 1978, a conservative Orange County state legislator, John Briggs, placed Proposition 6 on the ballot, calling for the firing of any California teacher caught "advocating, imposing, encouraging or promoting" homosexuality. Initially, Briggs' attempts to stoke bigotry were successful, with more than 60 percent of those polled supporting the measure. However, the earlier Coors boycott had set the stage for organizing against the Briggs Initiative.

The Bay Area Gay Liberation (BAGL) committee that formed out of the Coors boycott helped coordinate statewide rallies, speak-outs, popular concerts and aggressive campaigning against this anti-union and homophobic legislation. Milk's relentless campaigning and offensive against backroom politicking helped win over the majority of Californians, who voted down the ballot measure by more than a million votes.

IN A scene reminiscent of the recent California initiative battle over Proposition 8 in which gay marriage rights were overturned, the audience is treated to a glimpse of a timely debate. Milk effectively challenges gay magazine magnate David Goodstein who insists on circulating fliers against the Briggs Initiative that never mention the word "gay" or explicitly argue what the battle is really about.

If only an unapologetic and openly gay civil rights movement had been organized this time around, perhaps Prop 8 would have had a similar fate.

In 1978, Milk and thousands of previously inactive and apolitical gays and lesbians, as well as straight unionists, mobilized together in an effort that opened the door to a partnership that introduced some workers to new allies and allowed some LGBT workers to come out at work and begin fighting for civil rights within their unions.

Mass organizing tactics signaled a sharp departure from traditional backroom power brokering. Milk's urging led the California Teachers Association to mail out 2.3 million "No on 6" voter cards throughout the state.

Having anticipated his killing, Milk made a tape that friends played upon hearing the news of his death. In an act of political chutzpah, Milk's recording declared himself a committed gay movement activist to the end, named and derided moderate political gays who equivocated and quelled struggles rather than lead them, and then named who he believed his successors should and should not be in the event of assassination.

Finally, he repeated a sentiment he had expressed many times on the campaign trail, "Let the bullet that rips my brain open every closet door in America." Tens of thousands heeded Milk's call to come out and take action 30 years ago.

Celebrate his legacy today by grabbing a friend and a stack of fliers for the next action to repeal Prop 8 and hit the movie lines for Milk.