Apartheid in my name

Kyle Matzpen (not his real name) describes what it was like to be in Israel during the slaughter of Gaza.

JUDAISM EQUALS Zionism--so I have been taught since my early days in Hebrew school. To be against one is to be against both, so if you disagree with the tenets of Zionism or the actions of Israel in the slightest, then you're an anti-Semite--or in my case, a self-hating Jew.

But underneath this name-calling by Zionists lies a demand for unquestioning conformity from Jews in support of Israel in perpetuity, despite whatever that means for others. Otherwise, you're not a Jew.

At least that's what my family told me after they found out my "Free Palestine" political beliefs. I wouldn't say what happened next was necessarily "forced" on me--"coerced" is probably a closer term--but before I knew it, I was signed up to Taglit-Birthright Israel to connect to my "people's roots," and maybe get some sense knocked into me.

To give a fuller idea what Birthright is exactly, I'll quote one of its founders, a South African and current president of Hillel (a national college-level Jewish youth group), Avraham Infeld, who spoke to a crowd of us Birthrighteers on my last night in Israel. He said he had aimed through Birthright to "create a world where every Jewish child is born with a ticket to Israel tied to his umbilical cord." 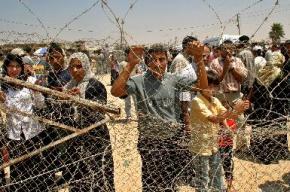 Despite the fact that I've never been there, and have no immediate family in Israel, I get a free 10-day, all-expenses-paid trip there, and could even emigrate there with little fuss if I so wished. All because I am Jewish. At the same time, Palestinians whose families up to 1947 had hundreds of years of roots in this land are forever barred from returning. This sense of racial nationalism and entitlement highlighted just about everything I saw and heard in Israel.

BEFORE THE in-flight movies started on the flight from JFK to Tel Aviv, they played a 30-minute video intro to Israeli tourist attractions. It was a roaring epic of music and montage shots of deserts, wildlife, mountains. And, overall, the theme of the land, the importance of the land, who should get the land, making the land bloom.

A shot of Jerusalem cuts to a clip of two Ibexes fighting over a chunk of cliff rock, then a cut to a pan-shot of acres of irrigated farm. The subliminal symbolism was unnerving.

We landed in Tel-Aviv on January 2. On January 3, our bus of about 40 college kids was on its way for some sightseeing in Jerusalem when a person next to me asked one of the American tour guides about the chances of the ground invasion of Gaza happening while we were in Israel. The tour guide smiled and said, "I think the chances are pretty good." He sounded pumped.

That night, we came to a place in East Jerusalem called Ammunition Hill. Ammunition Hill is the site of a major battle in what is called by the tour guides the "Reunification of Jerusalem"--in other words, when Israel captured East Jerusalem in the 1967 war, liberating the land from its inhabitants.

Today, it's a memorial with the Jordanian trench works from the battle fully restored. This came in handy, as one of the Israeli tour guides had us reenact in the trenches, step by step, the entire battle of Ammunition Hill.

When we arrived back at our hotel that night, we learned that while we were playing Israel Defense Forces (IDF) make-believe and shooting at invisible Jordanians, the ground invasion in the slaughter of Gaza had begun.

Suffice it to say, we were purposely kept out of the loop about what was happening at every step of the way. News about the IDF attacking UN-run shelters and food aid hubs, or the widespread use of the white phosphorus chemical weapons, I only heard after coming back. But information about Israeli casualties--they made sure that sunk in.

On the day after the ground invasion began, they took us for a tour of the Israel Defense Forces national cemetery, proving once again that the trip organizers had a morbid sense of irony. The constant noise of F-16s going supersonic and Blackhawk helicopters flying low overhead made an oddly poignant background noise as we viewed the graves of the likes of Levi Eshkol and Theodore Herzl.

I looked at the rows upon rows of graves of children my age, and thought about what life was like for them. They pump these children up to their eyes with nationalism, religious pride and a contrived Israeli-origin history, written by the victors, and they send them off to kill Muslims.

And if, God forbid, they die in battle against other children, they will be buried in a cemetery among heroes and prime ministers, so that even smaller children can come here on class field trips, put stones on their graves and think of how glorious it must be to die in battle. And if for some reason an Israeli child wants no part of this cycle, there must be something wrong with them.

The mandatory draft has created an Israeli society that is entirely militarized. Newspapers had full-page articles just on the type of gear that the Special Ops were using in Gaza. Everywhere, there were IDF T-shirts, T-shirts proclaiming that "Masada Will Never Fall Again" and Israeli flags. People seemed naturally more aggressive on every level. Just imagine it's like living in the movie 300, minus the slow motion, and with an uber-emphasis on the "stronghold of civilization against the dirty barbarian hordes" concept.

THE AMOUNT of racism I heard on the trip, from both my fellow Birthrighteers and the actual American and Israeli tour guides, was mind-boggling.

For example, a tour guide informed us as our bus was driving on a Jewish-only access highway through the West Bank that Palestinians "went to the bathroom in the street and bred like rabbits."

One afternoon, they took us to the Israeli-Lebanese border to get a better view of "the enemy." From our vantage point next to a rather plush Israeli suburban town--which wouldn't look out of place in Orange County--we were assured by our tour guide that somewhere in those bombed-out buildings in Lebanon, Hezbollah was waiting to kill us. The tour guide then taught us about the dangers of Islam. He said, "To me, 'radical Islam' is a misnomer since 80 percent of imams preach Jihad. Just saying."

I would find out after returning that, oddly enough, at the same time that this lecture was happening, a UN-controlled school in Gaza that was being used to distribute aid was being shelled, killing 40 civilians.

The next day, they took us on a lovely Jeep tour through the Golan Heights to learn about its strategic importance for Israel. Over here are bombed-out Syrian pillboxes, bunkers and rusted-out Syrian tanks. Here is an abandoned Syrian town, now in Israeli territory, and right over there, just over the border and less than a mile away, is the new Syrian town, so the people there can actually see every day where they used to live.

As the slaughter in Gaza was intensifying, and bits of information began floating in to us by rumor, the trip organizers found it necessary to intensify our propaganda education with "structured discussions" and a lecture from an IDF lieutenant colonel. We were told candidly that the siege was not, at its core, a response to the rocket attacks, but was an attempt to wipe out Hamas--to "squash out the cockroaches."

To quote the lieutenant colonel, "We gave them [the Gazans] democracy, and the land, and opened up the borders to goods and services, and what do they do to repay us? They voted for Hamas. They failed our test...I don't understand what they mean by 'innocent bystanders' in Gaza, because they all voted for Hamas."

On the charge that the 100-to-1 Palestinian-Israeli casualty ratio in the Gazan slaughter might be ever-so-slightly asymmetric, the lieutenant colonel gave what was possibly the most interesting statement of the entire trip. He reversed the David and Goliath analogy, saying:

Look at Goliath, he's well trained, well armored, huge, nothing can beat him, you'd think. But then along comes this tiny religious fanatic, David, with a slingshot. Goliath thinks nothing of him, so all David has to do is stay just out of Goliath's reach and hit him in his weak spot, and Goliath comes tumbling down.

This is a lesson for Israel--no matter how better armed we may think we are, we must never underestimate out foes and never let them out of our reach, or else we'll go the way of Goliath.

While we were bobbing in the Dead Sea, a fellow Birthrighteer told me--in the language of racism, accentuated by curses--that Palestinians and Muslims in general would "kill me twice, once for being Jewish, a second time for being an American."

Which was kind of weird since not a week earlier, I was at a protest in New York City against the bombing of Gaza among 2,000 people, 80 percent of them Muslim or Arab, holding up a sign saying "Jew for a Free Palestine"--and nobody stabbed me. In fact, I was well welcomed. Go figure.

While I was climbing Masada and touring Tel Aviv, protests all over the world were erupting against Israel's barbarism in Gaza. I was privileged to witness one particular news broadcast while in Tiberius. I couldn't understand a word that was said, but it was clearly a protest of the attack on Gaza put on by maybe 30 Israeli college kids.

They were being heckled, pushed and spat upon by passersby, and I realized two things: Firstly, that if they were in college, that would mean they were all veterans of the IDF, and secondly, that they had every ounce of my respect.

Zionism attempts to portray itself as the sole political representative of the Jewish people, for it is only then that it can whitewash the genocidal crimes of Israel by saying they are what's required to protect all Jews everywhere. This claim of hegemony is a lie.

Though still a minority, the numbers of fellow Jewish Anti-Zionists are growing. They are people who wish to epitomize the best in Jewish history, and stay on the side of the oppressed. They deny the racist concept that the life of an Israeli is somehow more precious than the life of a Palestinian.

Israel is a sort of utopia--modern towns defended by young men and women with Uzis, all held together by a strong sense of community. I can understand why it is tempting to some Jews. But it is a utopia for some, not for all, built on the oppression of others, and those groups are defined in purely racial terms. Israel is the world's largest and most aggressive gated community.

When speaking to the socialists of the Jewish Bund, the Russian revolutionary Lenin said that is was wrong to "legitimize Jewish isolation by propagating the idea of a Jewish 'nation.'" The task was "not to segregate nations, but unite the workers of all nations. Our banner does not carry the slogan 'national culture,' but 'international culture.'"

Peace is simply impossible as long as Israel defines itself at its core as a Jewish exclusive state, and the chauvinistic and racist tenets of Zionism remain its guiding philosophy. Only one state--one secular state, with equal rights for all and the right of return for all Palestinian refugees--can solve this. Nothing more, nothing less.