Teachers put to an unfair test

ACROSS THE country, the neoliberal educational model continues to be pushed. Privately managed and publicly funded charter schools are multiplying. In public schools, teachers are being forced to teach narrowly to standardized tests, and there's a push to deny union rights like seniority and tenure in favor of standardized test-driven evaluation and merit pay.

Examples of such moves abound. Following Hurricane Katrina, all union teachers were fired in New Orleans, and more than half the schools in that city became charter schools. In Washington, D.C., hundreds of teachers have been fired and at least 21 schools have been closed. In addition, Michelle Rhee, the chancellor of D.C. schools is proposing to "dilute tenure protection and link individual teacher pay and job security to improved student achievement," according to the Washington Post.

New York City is no exception. Advertisements for charter schools are being sent out en masse to residents of Harlem and placed in subway cars. Each year, there seems to be more of an explicit push to tailor instruction to fit standardized tests--complete with breakdowns and analyses of previous years' tests--so as to "help" teachers better teach to the test. The number of periodic assessments that eat into instructional time and cause immense amount of stress on students continues to rise. 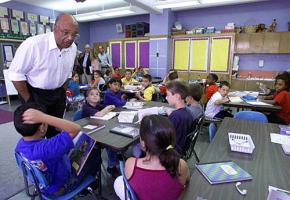 Shockingly, some of the most dramatic moves toward a neoliberal educational model have been agreed to by the leadership of my union, the United Federation of Teachers (UFT)--and even proclaimed as victories!

The oft-stated justification by union leadership for these concessions is that accepting neoliberal-lite proposals will allow for the union to have a say in what happens and head off more draconian attacks.

Then, in the fall of 2007, the UFT agreed to a "pilot," "voluntary" school-wide merit pay scheme. Rather than rewarding individual teachers, the plan gives a bloc of money to each school on the basis of the school's performance as a whole. This money is to be distributed by a committee of four, which must come to a consensus--and it includes two representatives of the school administration.

A New York City teacher group, Justice Not Just Tests! has launched a petition campaign to demand that the UFT: (1) Retract its support for the teacher data reports and merit pay programs; (2) Oppose all initiatives that promote a focus on standardized tests; (3) Oppose categorically the use of standardized tests in a high-stakes manner; and (4) Support alternative assessments like portfolios and other performance based assessments.

Thus, the potential exists for the principal to insist on an unequal division of the approximately $3,000 allotted per teacher.

Each school that is selected has to vote on whether to accept the program. But given the state of the economy, this is a lot of money to turn down, even for teachers who are opposed to merit pay and the move towards privatization. My school has been chosen for this program for the two years of the program's existence, and each year, it has passed (although this year by a very narrow margin).

The justification from our union leadership is that if we are going to have charter schools anyway, let them be union-run. If merit pay is coming anyway, let it be group merit pay instead of individual merit pay.

But this gets it backwards. The privatizers see such examples as victories. Charter schools are a step away from public control, and for that reason, most are nonunion. We should be fighting to keep public schools public, not jumping on the charter school bandwagon--while, of course, fighting to unionize charter schools that do exist.

If the neoliberals get their way, more of our educational funding will go towards merit pay and charter schools, which will undermine public education and union rights. For example, while the stimulus bill includes a welcome $54 billion for education, the New York Times reported that, "Programs that tie teacher pay to performance will most likely receive money."

In fact, a February 19 New York City Department of Education announcement stated, "New York City can also apply for grants to expand its Schoolwide Performance Bonus Program, which rewards educators for improving student achievement, from the $200 million Teacher Incentive Funds." This money could be better used to prevent budget cuts, lower existing class sizes or to increase teacher salaries across the board.

MEANWHILE, THIS fall, the UFT agreed to "Teacher Data Reports" that apply to Grade 4-8 English Language Arts (ELA) and math teachers. The reports break down the performance of the students of each teacher on New York State tests.

Schools Chancellor Joel Klein and UFT President Randi Weingarten jointly announced these reports as "a "new tool to help teachers learn about their own strengths and opportunities for development." The letter announcing the reports extolled the supposed virtues of the report--and even had the audacity to claim that the idea came from teachers themselves! "[M]any of you have told us how useful it would be to better understand how your efforts are influencing student progress," the letter stated.

I have heard of teachers complain of lack of mentoring, support and materials (including basics like books and copies), but never of not knowing or having a breakdown of our students' scores on standardized tests. In fact, we have been subjected to countless breakdowns of such "data."

At the same time, the letter spelled out clearly that "the Teacher Data Reports are not to be used for evaluation purposes" or in determining tenure. It is also specified that reports are to be a private document to be shared with each teacher and their principal. Again, our union leadership proclaimed a victory in keeping the data private and fending off attempts to use such data for evaluation.

But if the reports are not useful in teacher training and development, what are they useful for? Especially given the context of this push towards performance-based evaluation and merit pay, it is impossible to see these reports as anything but a foot in the door toward teacher evaluation on the basis of test scores, and ultimately publicly releasing this data.

The experience at my school has helped to shed light on the true nature of these reports. I'm a teacher at a middle school in New York City, one that is being "phased out" (read: closed down) over the next two years. In fact, the first discussion of Teacher Data Reports came at the meeting where the announcement of our school closing was made.

Several representatives from the DOE came in to close our school. One of them pointed out that the Teacher Data Reports "would be out there" when we apply for new jobs--an apparent effort to scare us into teaching to the test. And as our school closes, "excess" teachers become part of the teacher reserve and will have to apply for new jobs. The implicit threat here is that this data will determine whether we will be hired at a new school.

Our principal "rolled out" the Teacher Data Initiative at a recent faculty meeting. She started by explaining that we are all "accountable" for education: teachers, students, administrators, and parents (she forgot to mention Chancellor Klein and the politicians who perpetuate the testing craze, school segregation and overcrowded classes).

Whether we like it or not, we were told, education is becoming a business, and these data reports will hold us accountable according to a business model. The principal also mentioned that we could look at these reports to evaluate our own teaching practices. But that was clearly secondary to the overwhelming message that these were primarily for the sake of accountability.

It was pointed out by staff members that according to the UFT/DOE agreement: (1) the reports are supposed to be kept between teachers and their principal and (2) they cannot be used for the sake of evaluation. The principal did not contest these points, but also claimed that this data can be shared with other principals. So when we apply for new jobs principals will look at our Teacher Data Reports while deciding whether to hire us or not.

This was bad enough, but despite verbally agreeing that these reports were supposed to be private, she handed out all ELA and math teachers' data reports to every faculty member, compiled and stapled, apparently for the sake of comparison.

Many people on the staff were outraged, and several of us called the district representative from our union. The next day, a union meeting was held. Everyone at the meeting (which was about two-thirds of the chapter) signed a letter expressing our outrage, which was forwarded to the leaders of the UFT and the DOE.

AFTER A couple of weeks of e-mails and phone calls to the union and to higher-ups in the DOE, a superintendent from the Department of Education came in to apologize, along with a vice president from the UFT. Notably, our principal was absent--and has yet to directly apologize to the staff. The superintendent said that all principals were given professional development outlining the use of data reports, and that it was very clear that reports were to be handed out only in individual meetings.

The superintendents' new position on the confidentiality of the data is definitely a welcome development, as statements from the UFT and DOE have been unclear on this issue. Nonetheless, what is to stop principals from discretely sharing the data and this data informing hiring decisions?

A couple of conclusions can be drawn from this experience. The idea expressed in the joint letter from Weingarten/Klein that the Teacher Data Initiative would be a "new tool to help teachers learn about their own strengths and opportunities for development" is absurd. The incident at my school--along with my principal's and a DOE representative's initial framing of the issue--should prove beyond a doubt that Teacher Data Reports are ultimately meant to be a tool for the evaluation of teachers.

If this data is used for evaluation, teachers will face additional pressure to spend weeks of teaching students how to take the test, poring through old exams and dumbing down instruction to only cover the types of problems found on previous tests. In any case, we can expect principals to threaten to use these reports as evaluative tools either explicitly or otherwise.

Moreover, I refuse to believe that my principal didn't get the idea that these reports are a "tool for accountability" from somewhere up the chain. It's only because we came together as a united staff that the DOE felt the need to change the tone of the conversation with our staff.

Finally, we need to argue that the Teacher Data Initiative should be abolished immediately. It serves no useful purpose for professional development. There can be no effective mechanism to prevent the data's misuse among administrators, either sharing it with staff or administrators or using it, in practice, as a tool for evaluation.

We must demand that swift and dramatic action be taken, lest other principals feel that they can get away with sharing the reports publicly or among themselves.