Losing the legitimacy it never deserved

Commentators worry about what Brett Kavanaugh will do to the dignity of the Supreme Court, but Lance Selfa, author of The Democrats: A Critical History, explains that there was never any dignity about the ruling class interests that it upholds.

ONE OF the central themes of 20th century Italian Marxist Antonio Gramsci’s writings on the state was the contrast between different forms of ruling class authority.

Even the most democratic capitalist state has, at its core, the coercive force of the military, police and state surveillance, Gramsci wrote. But it also incorporates a web of institutions — from schools to political parties to social organizations — that reinforce the ruling class’s leadership over society, or what Gramsci called this “hegemony.”

It’s very unlikely that Arizona Sen. Jeff Flake has ever read or even heard of Gramsci. But his actions last week show he has some idea about how damaging Brett Kavanaugh’s testimony was to the popular “consent” on which the U.S. Supreme Court depends for legitimacy. 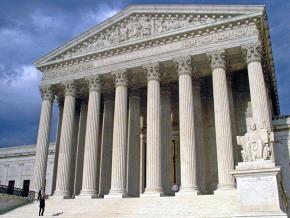 In explaining what he did last Friday — first voting in the Senate Judiciary Committee to advance Kavanaugh’s nomination to the Supreme Court, but then calling for further FBI investigation before a confirmation vote in the full Senate — Flake said: “We can’t politicize the Supreme Court. It’s the last institution in this country that still is respected above all others, and we can’t lose it.”

“The Court’s strength as an institution of American governance depends on people believing it has a certain kind of legitimacy — on people believing it’s not simply just an extension of politics, that its decision-making has a kind of integrity to it,” Kagan said. “If people don’t believe that, they have no reason to accept what the Court does.”

Which is where Brett Kavanaugh comes in.

CHRISTINE BLASEY FORD’S September 27 testimony about Kavanaugh’s sexual assault was so credible and generated so much empathy that top Republicans acknowledged afterward that it was an “abject disaster” for Kavanaugh’s confirmation to the Supreme Court.

Kavanaugh responded with a yelling, angry, self-pitying and highly partisan speech. Being unable to attack Ford directly, he insinuated that she was part of an 11th hour plot by Democrats and liberals who were disgruntled by the outcome of the 2016 election.

Dialing up a right-wing conspiracy theory, he accused his critics of wanting to avenge “the Clintons” and of receiving millions from “outside left-wing” organizations.

Besides revealing himself as the arrogant and entitled conservative apparatchik that he is, Kavanaugh also ripped away the mystique of the Supreme Court justice who is dedicated to the law and the Constitution, and above partisanship, acting as a neutral umpire calling legal “balls and strikes.”

Kavanaugh even warned that “what goes around, comes around” — a not-so-subtle threat of payback to his opponents if they ever found themselves on one side of a future Supreme Court case.

And this is in addition to the possibility that the Senate will seat a justice, credibly accused of sexual assault, on a Supreme Court that will decide cases affecting millions of women.

To the likes of Flake, the one-week FBI investigation is an exercise in dotting the i’s and crossing the t’s about Kavanaugh. “This country is being ripped apart here, and we’ve got to make sure we do due diligence,” he said, according to the Washington Post.

For many Democrats who staked their challenge to Kavanaugh on his refusal to agree to an FBI investigation, it also shores up the process.

If the FBI doesn’t turn up anything more damaging to Kavanaugh than what’s on the public record already — where plenty of existing evidence disqualifies him — then “red-state” Democrats like Sen. Joe Manchin of West Virginia could get a free pass to make Kavanaugh’s confirmation “bipartisan.”

The politicians may think that an FBI investigation will make Kavanaugh and the court more “legitimate” in the eyes of the public, but just the opposite could be the case. That will be especially evident if Kavanaugh becomes the vote that solidifies a hard-right Court majority for years — and possibly decades — to come.

But a Supreme Court with Kavanaugh on it would have a hard-line majority that stands on the other side of those supermajorities.

As Cook Political Report analyst David Wasserman pointed out in a September 27 tweet: “To Dems who can’t believe what they’re watching, remember: a majority of the Senate now represents 18% of the population & answers to a subset of voters that is considerably whiter, redder and more rural than the nation as a whole. That’s the reality of our times.”

If those facts aren’t enough to worry mainstream opinion-shapers about a long-term crisis of legitimacy for the Supreme Court, they should.

Sentiment about the Court could soon be expressed in similar terms as the six in 10 Americans who think the U.S. government requires major structural changes, and the 75 percent who express little to no confidence in elected officials, according to the Pew Research Center.

DESPITE THE mythology surrounding the Court, it has long been the most insulated and least democratic part of the U.S. government. For much of its existence, it upheld the views of the most reactionary forces in the U.S. political system.

The unjustified liberal faith in the Supreme Court dates from a relatively brief period, running roughly from the mid-1950s to the early 1970s, when the Court issued rulings striking down racial segregation, prayer in public schools and bans to conception. It also expanded the rights of racial minorities, the accused, political dissidents and voters. It legalized abortion and (for a time) outlawed the death penalty.

While these decisions were all victories for democratic rights, they were also the product of a period of both unprecedented economic expansion and also the mobilization of millions in the civil rights, women’s and other social movements.

But establishment liberals drew the wrong lessons from this period. Always more focused on influencing the state from within Congress and the courts than on the streets, they became increasingly reliant on a failed strategy of lobbying Democrats and relying on legal efforts to defend our rights.

Meanwhile, the right wing carried out a decades-long campaign to create a cadre of conservative judges who, with the help of Republicans (and some Democrats), are moved into lifetime appointments in the federal judiciary.

Kavanaugh is the capstone of this strategy: Someone with the right pedigree and credentials, an apprentice to the special prosecutor investigation that precipitated the impeachment of Bill Clinton, a legal counsel in the Bush White House, and 12 years on the U.S. Court of Appeals for the District of Columbia Circuit — often the final step before an elevation to the Supreme Court.

THE WAY the Blasey-Kavanaugh hearings unfolded showed these two outlooks of liberals and the right in stark relief.

While Democrats hammered on the need for an FBI investigation, Republicans turned the hearing into a partisan shouting match.

At the one point when Democratic Sen. Dick Durbin cornered Kavanaugh — who literally ran out of words trying to avoid agreeing to an investigation — Republican Sen. Lindsey Graham came to the rescue with a partisan rant that branded the hearing as an “unethical sham” and called out any Republican who would vote against Kavanaugh.

This showed the stakes of the fight — and which side was willing to do whatever was necessary to win.

For Republicans, even a defeat in the upcoming midterm elections as a result of bitterness at the Kavanaugh nomination is a small price to pay if they can have their way with the Supreme Court for decades to come.

Remember, this is the same crew that left a Supreme Court seat vacant for almost a year rather than even meet with the milquetoast moderate who Barack Obama appointed in 2016. This time, they actively colluded to rush the vote on Kavanaugh and prevent the release of thousands of documents that would show him to be the partisan hack he is.

Against this, the Democrats plead for a return to bipartisanship, comity, normal order, and the rest of babble favored by the Washington establishment.

It’s about time that some quarters on the progressive and liberal side of politics are advocating structural reforms to weaken the conservative hold on the courts. But mainstream liberals are still hoping that various institutions — from the courts, to a Democratic-controlled House, to Robert Mueller’s investigation of Trumpworld and Russia — will save us from the current nightmare.

That commitment underscores why they are so compromised in leading a “resistance” to Trump. As British socialist Richard Seymour wrote:

The Democrats want a powerful, violent state. But they want it to be legitimate, and fit for purpose as the organizer and enforcer of liberal capitalism. That’s what is at stake when Senator Leahy complains about politicization. It’s also one of the reasons why the self-defense of the liberal establishment in the face of reaction, from the Breitbart assault on ACORN to the Tea Party to Trump, has been so dreadful, so unavailing. They want, ridiculously, to reheat Cold War nationalism.

IF ANYTHING good came of Kavanaugh’s unhinged and smirking performance in front of the Senate, it’s that it exposes even more, as Jacobin’s Meagan Day put it, the “banality,” the ordinariness and the pettiness, not just of Kavanaugh, but of the entire class that wants to place him on the Supreme Court.

This whole spectacle delegitimizes the powers that be in the eyes of millions, as Day writes:

What dawns upon you when you bear witness to Trump — even more so than with [George W.] Bush, who more closely resembles Kavanaugh in both his fatuous smugness and his more conventional unobstructed path to political power — is that the people at the helm don’t necessarily know anything special.

For the most part, this ruling class doesn’t have any idea what most working people face daily. And they generally don’t care unless they’re forced to — as when two sexual assault survivors confronted Flake in a Senate Office Building elevator. Or when millions of people stand up to fight for their rights.