Alan Maass reports on the bonus scandal at AIG--and the even bigger rip-offs on Wall Street that are still coming to light.

THEY CRASHED the Wall Street casino with their reckless gambling and needed a bailout from the federal government to prevent the whole system from melting down.

But that isn't stopping the titans of high finance from awarding themselves bonuses that add up to as much or more than most people will see in a lifetime of work.

The bailed-out insurance giant AIG admitted over the weekend that bonus checks totaling $165 million were in the mail--sent out on Friday the 13th--to the very same executives who sent the company crashing toward bankruptcy until the federal government stepped in with a multibillion-dollar handout.

In the last three months of 2008, AIG lost $61.7 billion, the largest quarterly loss of any company in the history of capitalism. Nevertheless, the company is paying out--and publicly defending--huge bonuses to managers, including 73 checks in the $1 million-plus range.

This outrage exposed the arrogance of Wall Street's high rollers, of course--but also the timidity of top government officials, especially the Obama administration, to stop the continuing rip-offs at banks and financial institutions that the government now controls. 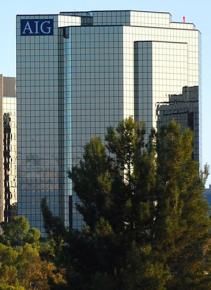 Indeed, as the bonus scandal unfolds, the dimensions of an even bigger rip-off are coming into focus. Last weekend, AIG revealed the recipients of far larger payouts to cover its bad debts since the Feds stepped in last fall--and it turns out that AIG has given tens of billions in bailout dollars to banks that already have their hands out to Washington for a "rescue."

THE FEDS have handed over $173 billion to AIG so far to keep the company afloat, including another $30 billion in bailout funds at the beginning of March.

Less than two weeks after the latest handout, top executives were siphoning millions out the back door in bonuses. Among the 73 crooks who got away more than $1 million or more, 11 don't even work for AIG anymore, including one who got $4.6 million.

And that's not the end of it. Under deals reached before the government rescue, AIG owes a total of $450 million in bonuses for 2009 and 2010--and that's just to employees of the previously obscure division that brought the company down with catastrophic losses on an unregulated brand of "insurance" on risky investments. Company-wide, AIG plans to spend more than $1.2 billion on bonuses.

Even more incredible is the fact that AIG executives defend the bonuses as necessary to keep "talented staff." In a letter to Treasury Secretary Tim Geithner, AIG Chair Edward Liddy complained about pressure to revise the terms of the bonuses, insisting that the company would lose top people "if employees believe that their compensation is subject to continued and arbitrary adjustment by the U.S. Treasury."

Political leaders of both parties responded to news of the bonuses with furious denunciations, of course. According to press reports yesterday, congressional Democrats are planning legislation to require AIG to get the money back.

For his part, President Obama said he would have the Treasury Department "pursue every single legal avenue to block these bonuses." At a White House press gathering, he asked, "How do they justify this outrage to the taxpayers who are keeping the company afloat?"

But to this point, the Obama administration has claimed to be powerless to intervene--because of AIG's existing contracts with employees. "We are a country of law," Larry Summers, director of Obama's National Economic Council, insisted on a Sunday political talk show. "The government cannot just abrogate contracts."

So...the federal government, which controls 80 percent of AIG and which has poured more than $170 billion into the company, can do nothing?

Even fellow Democrats aren't buying it. "If the taxpayer didn't bail out AIG, those contracts wouldn't be worth the paper they're printed on," said New York Attorney General Andrew Cuomo, who has launched a state investigation of the AIG bonuses. "Just because there's a contract doesn't mean there's no way around the contract."

And since when are government officials so worried about "abrogating" contracts? When the Big Three auto companies went to the government for loans to stay in business, lawmakers of both parties insisted on huge mid-contract concessions from the United Auto Workers--which come on top of decades of givebacks--as an explicit condition of the $17.4 billion the automakers have received so far.

"Apparently, the supreme sanctity of employment contracts applies only to some types of employees, but not others," wrote Glenn Greenwald at Salon.com.

AS CONTEMPTIBLE as the bonus scandal is, it may be just the tip of the iceberg at AIG. As the New York Times put it in an editorial, "Seen by themselves, the payments are huge, but they are less than one-tenth of 1 percent of the money already committed to the AIG bailout. And now we're starting to see who was pocketing the bulk of that money."

Last weekend, the company released a list of banks and other investors that it has paid off with the federal government's money.

Basically, it shows that AIG is making good on its promises to cover other gamblers' losing bets on investments--but at the full value of the bet when it was made, at the height of the speculative bubble produced by the housing boom. For the gamblers, AIG's payouts are like the worst deadbeat who owes you money suddenly showing up on your doorstep to pay off in full, plus interest.

AIG got into trouble not because of its core business of commercial and industrial insurance, but because of an immensely profitable sideline developed by one division focused on financial markets.

This division pioneered something called "credit default swaps," which amounts to an insurance policy on huge investments like bonds. Basically, AIG was selling financial protection to Wall Street's biggest players, promising to cover their losses if the securities they were buying defaulted.

The biggest demand for credit default swaps came from big banks and huge institutional investors who were plunging into the booming market in so-called mortgage-backed securities--bonds that packaged together masses of mortgage loans, with buyers making a profit when the borrowers collectively paid off the loan with interest.

To AIG, this form of insurance--though it wasn't called insurance so the government wouldn't regulate it--looked like easy money: Sell the promise to pay off in the event of defaults, which never seemed to happen while the housing market was booming. The big investors got to buy risky bonds and securities without having to explain how they would pay for potential losses--since, after all, AIG was "insuring" them.

The swaps were an extremely profitable business--until the housing bubble burst, and AIG's gigantic bluff got called. The company's promise to cover bad investments put it on the hook for huge sums--so large, in fact, that the threat of AIG's bankruptcy frightened the U.S. government and the Federal Reserve Bank into saving it, just days after the Feds let investment bank Lehman Brothers go under.

Now, AIG is using bailout money to make good on its debts--and at full value. It isn't even requiring swap buyers to eat a part of the loss from investments that were a toxic time bomb waiting to go off.

According to the Financial Times, AIG has paid out nearly $50 billion related to losses on credit default swaps. And who is the biggest recipient? $12.9 billion for banking giant Goldman Sachs, which has raked in billions in federal bailout money on its own account.

Even the Wall Street Journal editorial board was furious. "This comes after months of claims by Goldman that all of its AIG bets were adequately hedged, and that it needed no 'bailout,'" the Journal wrote. "Why take $13 billion then? This needless cover-up is one reason Americans are getting angrier as they wonder if Washington is lying to them about these bailouts."

And this isn't the final chapter in the story, either. According to the New York Times, the disclosures so far "account for $107.8 billion in AIG bailout money...Another $30 billion was added to the AIG bailout pot this month and must be accounted for as soon as it is spent. That leaves some $32 billion unaccounted for. Where did it go?"

That such a question even arises exposes the absurdity of the Obama administration's protestations that it can't interfere. The Wall Street giants think they can play the federal government for suckers, and the Feds have yet to prove them wrong.

[I]f our very own Secretary of the Treasury doesn't even learn of the bonuses until months after AIG has decided to pay them, and cannot make stick his decision that they should not be paid, AIG is not even accountable to the government. That means AIG's executives--using $170 billion of our money, so far--are accountable to no one.