The rise of Trumpism and how to fight it

Dorian Bon puts Donald Trump and the reactionary forces attracted to his campaign in the context of the rise in support for right-wing parties and formations internationally.

ONE WEEK before the election, Donald Trump is running behind in just about every opinion poll. Even after the latest controversy over Hillary Clinton's e-mails, it appears that the Republican nominee has been too thoroughly exposed as a sexual predator, tax cheat and all-around sleazebag to catch up with Clinton.

Nevertheless, tens of millions of people will cast their ballots for this man. And some may do more than just vote. Between Trump's comments inciting his base to "get everybody to go out and watch" polling stations and his bluster about only accepting the results "if I win," hard-right elements drawn to his campaign might very well organize to harass voters on Election Day.

Even leaving aside the possibility of marauding, right-wing poll-watchers, other questions will have come up for readers of this website: Why is Donald Trump's bigotry and aggressive chauvinism finding such a large audience? How can so many millions of people who don't have millions in their bank accounts be planning to vote for him after everything we know? 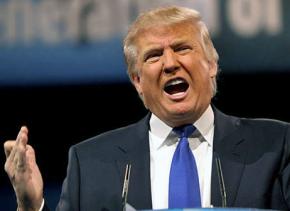 More generally: Where is the momentum on the far right coming from? Where is it going? And what can be done to stop it?

THERE ARE a lot of factors to consider in answering these questions.

Why such a large audience? Though the messenger is a dim-witted buffoon, Trump is tapping into a number of inflammatory and time-honored right-wing traditions, from the persecution of immigrants and criminalization of African Americans and Muslims, to the subjugation of women and obsessions with U.S. power and superiority.

And while he himself is a billionaire real estate tycoon, his campaign is about channeling discontent with the social crisis of the Clinton-Bush-Obama era in a violent and bigoted direction.

Though the bulk of the leadership of the Republican Party seems to regard him--for good reason--as a total disaster, Trump's success has everything to do with the political trajectory of the Republican Party over the past several decades. GOP leaders have benefited off pandering to all the same themes that Trump has in this election. As Lance Selfa wrote for SocialistWorker.org:

If we're going to talk about Trump's inevitability, we should really talk about the inevitability of the Republicans--based on their political direction in the past several decades--nominating someone like Trump: an "outsider" to the party apparatus, running on a "populist" or "anti-establishment" platform, who openly advocates nationalist, xenophobic and anti-immigrant sentiments.

Trump lashes out against the established political and social elite for having sacrificed the well-being of the nation in order to advance their own power. He promises to "make America great again" by dethroning its corrupt rulers and declaring war on the immigrants, refugees and other scapegoats who have supposedly thrived in the meanwhile.

His worldview is false, of course--just look at the economic statistics regarding the living standards of the vulnerable populations Trump scapegoats.

But Trump is able to gain a hearing with a core of supporters among the middle class and sections of the working class because his rhetoric about an economy in decline and a political system unresponsive to people's needs fits with their experiences. Combine that with decades- and centuries-old racist and nationalist prejudices, and you have the ingredients of a toxic, right-wing stew.

In other words, Trumpism is firmly rooted in the conditions and experiences of many millions of people. Trump is all but certain to go down to defeat on Election Day--possibly by a historic margin. But Trumpism will thrive until the status quo that produces it is challenged and changed.

TRUMP'S BRAND of right-wing populism isn't unique. Wherever similar social conditions exist--economic decline, a mistrusted state, and traditions of bigotry and discrimination--Trumpism or something like it does, too.

In Europe, most countries are facing economic hardship that is measurably worse than in the U.S.--and the forces of anti-establishment nationalism are on the rise, whether through new political parties or far-right currents within existing mainstream parties.

In Britain, contempt for the ruling elite and anger toward immigrants were the prime factors in the referendum vote for the UK to leave the European Union.

Since "Brexit," the Conservative Party has tried to refashion itself to capitalize on these sentiments. At the Tories' annual party conference in October, Prime Minister Theresa May promised to check the power of the rich, tame the unruly unions and curb immigration, all in defense of "ordinary" people.

May and the Tories are hoping to counter the UK Independence Party, which has achieved a number of electoral successes--including being one of the major forces on the victorious "no" side of the Brexit vote--with its nationalist and anti-immigrant agenda.

In France, the far-right National Front has become the dominant party on the right, in opposition to a Socialist Party government that has betrayed its working-class base by embracing neoliberalism and implementing drastic repression. National Front leader Marine Le Pen could well win the first round of next year's presidential election.

In Germany, the immigrant-hating party Alternative for Germany has elected representatives in 10 of Germany's 16 state parliaments, and is now the dominant opposition group in two states, Saxony-Anhalt and Mecklenburg-Vorpommern.

And in Austria, the Freedom Party, which has explicit links to fascism, broke a decades-old political duopoly of the country's mainstream parties to come within 31,000 votes of winning the presidency earlier this year. Its candidate Norbert Hofer will get another chance in December, when a new election will take place following the annulment of the May runoff he barely lost.

In Eastern Europe, where several fervently right-wing nationalist governments are already in power, more extreme, fascist organizations have emerged alongside them. In Hungary, where the xenophobic Fidesz party reigns, the fascists of Jobbik are gaining momentum; in Poland, governed by the right-wing Law and Justice Party, extreme right electoral and street organizing is on the rise among groups such as the All Polish Youth.

One of the most striking recent victories for right-wing populism took place outside of Europe. In the Philippines, former Davao City Mayor Rodrigo Duterte won this spring's presidential election by harnessing popular anger at the clientelism of the elite, Western imperialism, grinding poverty, and costly crime and drug epidemics.

Since then, Duterte has moved to consolidate state and military power, and launched a murderous police and vigilante campaign against drug users--or anyone perceived to be a drug user. Thousands have been killed and even more imprisoned.

In each of these cases--and there are more examples of the success of the right, stretching from Latin America around the globe to Asia--national and regional particularities and the right's level of organizational development have affected the specifics.

But a common thread links them in important ways to the success of the Trump campaign in America--the attempt to channel popular anger at social decline toward both the political establishment and various, dangerous "others," while promising reinvigorated national pride and control.

UNDERSTANDING THESE common threads is critical to mobilizing an opposition, whether it is against outright fascists in countries like Greece or Austria, or the particular brand of right-wing populism that Trump represents.

Trump is not a fascist, and his campaign is not the embryo of a Nazi party, though elements of the far right may be drawn to it. But the factors that account for his success are the same ones that underlie the growth of explicitly far right organizations in Europe.

What do those factors tell us about confronting an emerging and emboldened right wing?

The first lesson is that the right wing can't be shrugged off as insignificant, and protesting against it shouldn't be dismissed as giving the right the attention it craves. The vile ideas of figures like Trump, just like the more developed reactionary filth of openly fascist parties, have to be named and confronted. The right's scapegoats aren't responsible for the deteriorating conditions working people face today--the system is.

Thus, one of the most important steps in confronting Trumpism came earlier this year when hundreds of Chicagoans mobilized to protest a Trump campaign event, leading to its cancellation. After that, no one could fool themselves that Trump's rallies were something other than a carnival of reactionary filth.

Equally important, the right wing's politics of despair and scapegoating have to be countered with a positive alternative--one that stands for justice and democracy, in contrast to the prejudices of the right.

This is why building social movements against all the oppressions and injustices faced by ordinary people is important--not only for winning change on particular issues, but in challenging the success of the right wing that tries to exploit these conditions.

Unfortunately, for many people, the instinctive reaction to the rise of a figure like Trump isn't to build social movements, but to hope that a more liberal figure from the political establishment will stop the right-wing menace. But this only further entrenches the very conditions that give rise to the audience for Trumpism.

In the U.S., can we expect the Democratic Party to challenge a corrupt and unresponsive political system that serves the interests of the 1 Percent? Absolutely not--the Democrats have been in power for most of the last generation and are totally wedded to a pro-corporate agenda.

Can we expect the Democrats to counter the neoliberal offensive that has led to the decline in working-class living standards? Combat racism and discrimination? Stand up for the rights of women and LGBT people without apology? No, no and no.

Putting faith in the Democrats as a short cut for defeating bigotry and nationalism will only contribute to the problem. If the global rise of the right has taught us anything, it's that the right must be confronted by protest--and that the left must fight without concession for solidarity instead of bigotry.