The liberals fall in line

Liberalism's hard-wired propensity always to accept "half a loaf" without even trying to fight for the whole thing has led to a pro-corporate health care "reform" bill.

AS HEALTH care reform legislation in Congress limps to what National Nurses United President Rose Ann DeMoro called an "inglorious end," it's remarkable how few liberals feel enthusiastic about a bill that is supposed to represent a crowning achievement for them.

Aside from a few policy wonks, many (if not most) liberals feel that the health care legislation that will emerge from Senate and House negotiations is insufficient--and, in parts, harmful to ordinary people's health care. The most ardent supporters of reform know that the likely "compromise" modeled on the more conservative Senate version of the bill will be a huge gift to the insurance industry. At the same time, they feel that Democrats have gotten far less than they could or should have, in large part because they didn't even try.

What happened to all the brave announcements of "lines in the sand" and "standing up for real reform?" Over the summer, the House Progressive Caucus threatened to vote as a bloc against any legislation that didn't include a "public option"--a publicly financed insurance system to compete with private insurers. Today, it's almost certain that the final version of the bill will not include a public option.

So will the House progressives follow through on their threat to defeat the bill? Don't count on it. House Speaker Nancy Pelosi might give a few progressive caucus members a "free vote" to oppose the bill if there's enough of a cushion to pass it, but if progressives stand between passage of the bill and its defeat, don't expect them to vote to defeat it.

What about Howard Dean, the former Democratic National Committee chair who made news in December when he took a very public stand against the bill that was about to pass the Senate. In a December 17 Washington Post op-ed article, Dean wrote:

Any measure that expands private insurers' monopoly over health care and transfers millions of taxpayer dollars to private corporations is not real health-care reform...Few Americans will see any benefit until 2014, by which time premiums are likely to have doubled. In short, the winners in this bill are insurance companies; the American taxpayer is about to be fleeced with a bailout in a situation that dwarfs even what happened at AIG. 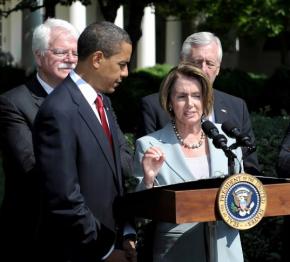 Dean was right on target with that criticism. White House spokesman Robert Gibbs even attacked him for it during a press briefing.

Yet of late, Dean has become a lot less vocal and a lot more accepting of the legislation as it stands. As he told Meet the Press on December 20: "I would let this bill go to conference committee and see if we can fix this bill more...Let's see what they add to this bill and make it work. If they can make it work without a public option, I'm all ears."

According to Newsweek reporter Suzy Khimm, Dean's somersault resulted from back-channel contact with the White House and the realization that the Senate bill was going to pass. As Khimm explained:

While he attempted last week to use the failure of the public option as a new point of leverage, Dean only succeeded in alienating himself from the key players in the debate (and the flip-flops that riddled his other criticisms of the bill didn't help his credibility). In the end, Dean wants to be at the negotiating table--not cast outside it--and he probably decided to adjust accordingly.

THEN THERE are the elected representatives who have been on record for years as favoring a single-payer health care system eliminating the role of private health insurers. For them, even the prospect of a "public option" represented a retreat from their longstanding public positions. Surely they would hold up the banner of genuine health care reform, right?

Not really. In fact, they proved more adept at talking about real reform than actually voting for it.

Take Rep. Anthony Weiner, the telegenic New York congress member who made the rounds of television talk shows throughout the fall, bashing the insurance industry and calling for genuine health reform. During the House debate on its bill, Weiner extracted a promise from Pelosi that his amendment supporting a single-payer system would receive an "up-or-down" vote.

As the October deadline for the vote drew near, Pelosi--reportedly with White House encouragement--began wiggling out of the deal. Single-payer advocates mobilized to hold Pelosi to her promise, but Weiner withdrew his amendment. Single-payer advocates Reps. John Conyers (D-Mich.) and Dennis Kucinich (D-Ohio) issued a letter supporting the climbdown. It read, in part:

Many progressives in Congress, ourselves included, feel that calling for a vote tomorrow for single-payer would be tantamount to driving the movement over a cliff...We are now asking you to join us in suggesting to congressional leaders that this is not the right time to call the roll on a stand-alone single-payer bill. That time will come.

Pelosi's cover story was that allowing Weiner's amendment would open the floodgates to other amendments, like those banning abortion. So what happened? Weiner withdrew his amendment, and Rep. Bart Stupak (D-Mich.) introduced his, banning coverage for abortion. The bill, with the Stupak amendment included, passed the House.

Of all the House progressives, only Kucinich and Rep. Eric Massa of New York voted against it. Though Kucinich did the right thing in voting against the House bill, his and Conyers' letter had already given other progressives justification in voting for it.

Another articulate critic of pro-corporate health insurance reform--and a regular on liberal shows like MSNBC's Countdown with Keith Olbermann and The Rachel Maddow Show--Vermont's independent Sen. Bernie Sanders, got further than Weiner. He actually introduced his single-payer amendment to the Senate and, under Republican pressure, spent six hours on the Senate floor, reading it line-by-line.

Senate leaders, worried that Sanders' amendment was delaying the vote they needed to move the bill forward, pressured him to stand down. He did, after receiving a pledge that $10 billion would be invested in community health centers. Sanders' office later issued a press release saying the provision will "revolutionize" health care. Sanders' was one of the 60 votes that moved the Senate bill along.

SO AS Congress, in closed-door negotiations, moves toward a final vote on health care reform, liberals are preparing themselves to accept a pro-corporate health care bill that is unlikely to fix more than a few of the problems associated with the current dysfunctional system.

The chorus of liberal opinion selling this rotten compromise to the most committed supporters of health care reform will grow louder. We will hear all of the claptrap that always gets hauled out in these situations: "We can't let the perfect be the enemy of the good," "We can improve the bill in the future," "If the Republicans hate this bill, there must be something good about it," and "If this bill goes down to defeat, it will embolden the right, and chances for any other reforms will be finished."

As always, the liberals will play the loyal soldiers for an administration that has shown it is much more interested in winning the support of industry "stakeholders" and conservatives like Sens. Ben Nelson (D-Neb.) and Joe Lieberman (I-Conn.) than in fighting for any genuine health reform.

Even the prospect of the oft-cited positive effects of the bill--30 million uninsured Americans covered, a ban on the insurance industry policy of "rescission" (dropping coverage for sick people on technicalities) and denial of insurance to those with "pre-existing conditions"--may turn out to be mirages.

The liberals who are now convincing themselves that these are reasons to vote for the bill may find out that most Americans won't consider forcing people to buy private insurance as "universal coverage." And they may also find out that loopholes in the bill allowing insurers to jack up prices to unaffordable levels will neuter the other tough-sounding insurance reforms. If the Senate plan to tax "Cadillac" health care plans remains in the bill--as Obama prefers that it does--substantial numbers of Americans are going to see a cut in their current health care benefits.

Unfortunately, that may be where we end up because of liberalism's hard-wired propensity always to accept "half a loaf" without even trying to fight for the whole loaf. In an insightful commentary focused predominantly on liberalism's putative leader, President Obama, Huffington Post contributor Drew Westen put his finger on this point:

I don't honestly know what this president believes. But I believe if he doesn't figure it out soon, start enunciating it, and start fighting for it, he's not only going to give American families hungry for security a series of half-loaves where they could have had full ones, but he's going to set back the Democratic Party and the progressive movement by decades, because the average American is coming to believe that what they're seeing right now is "liberalism," and they don't like what they see.

Thanks to Helen Redmond for information on the role of Reps. Kucinich, Conyers and Weiner.