Our resistance in the era of political whiplash

We need a left-wing resistance that can stand up in protest against the rise of the far right--and that can put forward concrete solutions to the economic and political crisis.

CALL IT "shock and dread." It's the Trump-era version of the shock-and-awe military strategy at the start of the 2003 U.S. invasion of Iraq--only instead of a terrorizing military bombardment, it's a political barrage of right-wing atrocities and social suffering.

Think about it: In less than a month's time, we witnessed the far-right carnival of hate in Charlottesville and a murderous attack on anti-racist demonstrators; the unnatural disasters of Harvey and Irma confirming the destruction that capitalism has caused through climate change and greed; more nuclear saber-rattling led by the world's main super-bully in Washington; and the Trump administration ending DACA protections for undocumented youth now threatened with deportation to places most don't remember. And those are just some of the lowest lowlights.

There's more to the last month than a list of nightmares, of course. The fascists' terrorism in Charlottesville was met with anger and revulsion, expressed at vigils and protests organized within hours across the country--and, in the following weeks, at large countermobilizations in Boston, the Bay Area and elsewhere that have pushed the alt-reich on the defensive for now. 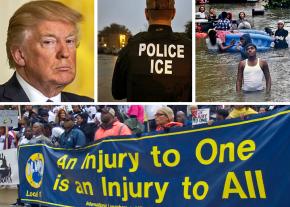 Similarly, immigrants and their supporters responded immediately to the rescinding of DACA with protests and plans for more that could put pressure on political leaders and the courts to block Trump--as happened with the administration's Muslim ban earlier this year.

Still, it's easy to become disoriented by the whiplash of events that suck up the media's full attention.

And that--notwithstanding the wild-card behavior of Trump himself--is a central part of the right's strategy: to stun opponents into inaction.

The right-wing agenda is unpopular on almost every issue, so its champions need a blitzkrieg approach of pushing ahead, as fast and as far as they can go on every front, before resistance comes together.

But remember that "shock and dread" is designed to make you forget the widespread and increasingly bitter opposition to the Trump-era hallmarks of greed, scapegoating and hate. In that opposition lies the potential to stop the right wing--if it's mobilized on the basis of solidarity and struggle.

THERE'S SOMETHING else that's important to remember about the era of political whiplash: The atrocities and disasters aren't disconnected from each other, nor from the right's scandals and setbacks, either.

This is how the media tend to portray the Trump era: a series of "historic," "unprecedented," "stunning" things that just happen to have happened at the same time.

First of all, a lot of it isn't so "unprecedented." The flooding in Houston caused by Hurricane Harvey was classified as a "500-year" event--meaning there is a 0.2 percent chance of flooding that severe taking place in that spot in a given year. Only, as Larry Bradshaw and Lorrie Beth Slonsky pointed out at SocialistWorker.org, Houston has had four 500-year floods in the last 10 years. The "unprecedented" is becoming routine.

Likewise, the murder of Heather Heyer in the terrorist car attack in Charlottesville represents a new stage in the violence of the far right, but it certainly didn't come as a bolt out of the blue. The alt-reich fanatics inspired by Donald Trump's campaign and election are responsible for a documented increase in hate crimes and increasingly violent rampages against counterdemonstrators who oppose them.

Another danger of political whiplash is that the shock of each outrage draws attention away from the others--and, crucially, from how they are connected to each other as products of an outrage-producing political and economic system.

A system where the world's most powerful warlord is willing to threaten the "fire and fury" of nuclear annihilation in the name of maintaining America's imperial power is the same system where the world's most powerful corporations are willing to risk environmental annihilation rather than change to methods of production that might reduce profits.

A society where the president panders to the far-right fanatics and their fantasies of ethnic cleansing and reactionary superiority is the same society where the bipartisan political establishment is willing to make victims of some of the youngest and most vulnerable immigrants.

At the root of the crimes and outrages of this era are the priorities of a capitalist system controlled by a small elite of the wealthiest and most powerful people.

Because their profits and power depend on the working class remaining divided and pitted against each other, the government that serves them relegates millions of working people to second-class not-even-citizenship or worse. Because Corporate America's bottom lines would suffer, the U.S. government weakens anti-pollution regulations and blocks international efforts to combat climate change.

This raises the problem with trying to fix one problem in society in isolation from the others--and still more, to do so by working "inside the system." Capitalism is like the game of Whac-A-Mole: Unless we change the rules entirely, for every injustice that is forced down in one place, others will pop up and have to be fought in another.

There are struggles for change in many different corners of society, each with their own histories and dynamics. But waging them most effectively requires an understanding of how they are connected and dependent on each other--and how, together, they can contribute to a broader struggle to change the rules of the game for good.

This is the case for joining the struggle for socialism today. Being part of an organization committed to changing society is an anchor in stormy times--one that can relieve the whiplash.

The appeal of socialism has revived enormously in the U.S. in the past several years because it is so obviously a better alternative to the political and economic system around us. The challenge is to make socialist ideas and organization part of all the concrete struggles that can bring us closer to a different world.

Donald Trump wants to build a wall on the border with Mexico to keep out immigrants, and he thinks Islam is a threat to national security. His Vice President Mike Pence thinks that the church, the state, fathers, husbands--almost everyone except women--should determine what women do with their reproductive lives, and he opposes workers organizing to demand any rights against the abuses and ultimatums of their employers.

The neo-Nazis who strutted through Charlottesville defended monuments to slavery, they hunted down African Americans to beat and abuse, they shrieked their hatred of Jews, they (like Mike Pence) think LGBT people need to be converted, and they (like Donald Trump) believe left-wing dissent is the problem with America.

From the bigot at the top to the bigots at the bottom, right-wingers understand that their political and social prejudices and grievances are related and part of a wider agenda.

The left we build today will be stronger if we likewise understand how our struggles and political efforts are related--and their fates ultimately bound together, because as the labor movement slogan says, "An injury to one is an injury to all." That means all struggles against exploitation and oppression, not just the most popular or those involving the most people.

This doesn't mean there aren't differences on the right. Most leaders of the Republican Party joined the general denunciations of the fascists after the murder of Heather Heyer, and many distanced themselves from Trump after he repeated white supremacist talking points in blaming anti-racists for the violence in Charlottesville.

Trump himself is at odds with a majority of the corporate elite over elements of his program of economic nationalism. Likewise, within the ruling class, there are significant divisions on questions like climate change and immigration.

But Karl Marx was right to compare rival capitalists to a "band of warring brothers," locked in competition, but ready to unite against a threat from below.

In the same way, the different factions of the right are bound to each other in important ways: The far right has gotten a platform it hasn't had in decades because of Trump's success, and the Republican Party establishment has always relied on hard-right factions like the Tea Party to galvanize support for its pro-corporate agenda.

Republican congressional leaders may grumble to reporters about Trump's pandering to white supremacy, but guess how many will oppose his proposal for more massive tax cuts for the super-rich.

THE DEADLY violence in Charlottesville was a wake-up call about the urgent need for a struggle against the far right. That will continue into the fall as alt-reich celebrities like Milo Yiannopoulos and Ann Coulter hit the campus lecture circuit to spout their hateful message.

We need to build a left-wing resistance that doesn't let the right go unopposed. We need to protest the reactionaries wherever they appear, and not go along with the liberal advice to ignore them and they will go away--because they won't. We need to claim the right of free speech for ourselves to make our opposition heard.

But we need something else as well: a left that puts forward a political alternative to the right's scapegoating and hate.

From Trump on down, the right can get a hearing because it offers false and brutal solutions to real problems in the lives of many, many people--declining wages and living standards, fewer good jobs to go around, a broken health care system, unaccountable government bureaucracies.

During the 2016 election, Hillary Clinton's telling answer to Trump's promise to "Make America great again" was that America was already great. Millions upon millions of people knew otherwise.

The left won't be able to counter the right if it stands for the status quo, like the Democrats do. We need to put forward strategies and solutions that target the real enemies--the ruling class--and build up solidarity and struggle with the reverse message that a victory for one of our movements will be a victory for all.

Here, we return again to the case for socialism, because this is exactly what groups like the International Socialist Organization (ISO) are trying to do today. On campuses around the country, ISO branches are organizing meetings on fighting the right and building the left. Find out where the ISO has branches near you, and join us for these discussions.

The disasters of capitalism are as numerous and obvious as they have ever been--and so is the need to do something now to achieve a socialist future.