Racism in the portrayal of Haiti

Edna Bonhomme looks at the distortions in the media and the politicians' depiction of Haiti--and what they won't admit about the real sources of the country's crisis.

IN THE aftermath of the earthquake in Haiti, I have been disturbed by the racist depictions of Haiti and Haitians.

First, the mainstream media's representation of Haiti has been, at best, a sensationalistic account of Black people incapable of helping themselves, and at worst, a portrayal of Haitians as responsible for their plight because they "signed a pact with the devil." I have been distraught by the lack of accountability of Western powers for creating and exacerbating the structural issues in Haiti (and other parts of Latin America).

In my critique of this media and political representation, I want to put forward rebuilding Haiti so that the people have equity and sovereignty. As a Haitian-American woman, I view Haiti through a feminist and Marxist paradigm--as such, I want a radical transformation of the economic and political structure of Haiti and the world to prevent further disasters from disproportionately afflicting marginalized people.

On the question of media and political representation, several questions should be posed. Who speaks and how do we speak about Haiti and Haitians? How do language and representation influence future policy? How can people work together to rebuild a greener, more just nation? 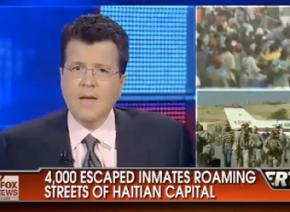 One framework for answering the first question is to recognize the current social conditions provide certain groups with resources and leave others without them--which often determines the conditions for speech and representation. As author Linda Martín-Alcoff put it, "The practice of privileged persons speaking for or on behalf of less privileged persons has actually resulted (in many cases) increasing or reinforcing the oppression of the group spoken for."

Portrayals of Haitians can be one-sided or worse if the person writing or reporting fails to highlight the full scope of Haitians' experiences or present an accurate account of the nation's history. As my colleague Sasha Kramer has reported about relief efforts after the earthquake, "Haiti has proven to be a country of brave, resilient and kind people, and it is that behavior that is far more prevalent than the isolated incidents of violence."

Unfortunately, mainstream television coverage of the crisis in Haiti have been dominated by upper-class, white reporters and commentators. Haitians who have had the opportunity to speak are those with Internet access, who often live in relatively unaffected areas and are privileged.

I do not wish to say that white, upper-class non-Haitians can't speak about Haiti, nor to deride their relief efforts. Rather, I am suspicious when the voices of "humanitarian aid" reflect the structures that created and perpetuated poverty in Haiti.

Furthermore, there is a biased and calculated manner when people speak about Haiti. Although I respect Edwidge Danticat's passionate and eloquent testimony about the situation in Haiti, there needs to be more accounts by left Haitian social activists.

For example, whether in academic texts or CNN newscasts, Haiti is spoken about as "the poorest country in the Western Hemisphere." If one is speaking about gross domestic product, Haiti does rank in the lower echelon by this measure. However, if one considers the spirit, history and soul of the people, one could argue that Haiti is the richest country in the world, because its people have survived and persevered in the face of suffering and exploitation.

Photographs, without a historical and political context, paint Haiti only as a failed state, rather than illuminating the longstanding capitalist isolation and unfair policies that made it that way.

It is not Haitians but the neoliberal capitalist structure that caused Port-au-Prince's urban poverty. In speaking about the nation, we must move beyond a stereotypical portrayal of suffering Black people, and toward other forms of solidarity and nation building.

IN 1967, Martin Luther King Jr. stated that the U.S. was "the greatest purveyor of violence in the world."

The United States and other imperial nations have been responsible for international structural violence. In Haiti and other countries in Latin America, global forces have pushed people from the countryside to urban areas and contributed to the formation and expansion of slums. Neoliberal policy has put basic food and services for sale in developing nations, while neglecting a green revolution.

The political and economic transformations in Haiti over the past 10 years have created a large informal labor system that prevents people from meeting their material needs--for example, land degradation and U.S. farm subsidies have contributed to food insecurity.

These are the consequence of long-term U.S. and international intervention. Over the past decade alone, Haiti has undergone a myriad of political transformations, marked by multiple escalations of violence and economic crisis--while at the same time, international debt and structural adjustment plans imposed by the International Monetary Fund and World Bank have added to the economic disparities.

MINUSTAH has been present in Haiti since 2004, yet it wasn't able to alleviate the destructive effects of the hurricanes in Gonaïves in 2006, nor make Haiti less vulnerable to environmental devastation. Hence, I doubt that sending troops after the earthquake will strengthen nation building and stability.

Emergency management, though difficult, must prioritize care and treatment before military intervention. Haitian government officials gave the U.S. the authority to monitor the airport in Port-au-Prince. As has been demonstrated over the past several days, military landing has been prioritized over relief landing. Moreover, aid has been dropped from helicopters rather than distributed to earthquake victims.

Additionally, Haitian officials who previously conceded to structural adjustments and military intervention should be held accountable for the demise of the Haitian state. It is imperative that Haitian officials and the Haitian people not allow the U.S. and other Western powers to monopolize the rebuilding efforts and further exploit people for their labor.

Currently, George W. Bush and Bill Clinton have been commissioned by the Obama administration to assist Haiti in the relief efforts. This is hypocritical considering both presidents had active roles in creating regressive policies, both for Haiti itself and Haitian immigrants living in the U.S.

Under the Clinton administration, Haitians migrating to the United States were refused asylum after the 1991 coup d'état that toppled the elected president, Jean-Bertrand Aristide. After Aristide was reinstated, the Clinton administration and World Bank imposed a crushing trade embargo to bring about "democratization." The embargo destroyed Haiti's fragile manufacturing industries and created further debt.

Haitians and non-Haitians should oppose these two former presidents being appointed to be Haiti's saviors. Instead, we should expose their role in creating Haiti's political and economic problems. We should exert pressure to prevent these same men from having a role in the rebuilding of Haiti. If the international community allows Bush and Clinton to determine political and economic reform in Haiti, we will see the reproduction of a failed, neoliberal state.

AS THE author and socialist C.L.R. James, himself a native of the Caribbean, wrote in his book about the Haitian Revolution, The Black Jacobins, "political equality can only be achieved by a drastic change in economic organization."

Rather than uphold the economic disparity that existed beforehand, everyone in Haiti should have access to education, food, health care and housing, irrespective of ethnic origin, color or caste. A responsible international community should stop rapacious multinational corporations from profiting from people's desperation. Instead, Haiti needs a just system that addresses deforestation, energy and labor.

One way to mitigate future destruction would be to plant native trees that protect land from erosion and hurricane destruction. Moreover, reforestation would allow Haitians to have jobs and rebuild the island to a state closer to what it was when the Arawaks lived there 600 years ago. Rebuilding Haiti should also involve the use of renewable energy so the country doesn't become dependent on foreign oil.

Most importantly, Haiti should be relieved of its debt. This has been one of the major structural factors that limited social services and infrastructure from developing in the country. The removal of this debt is imperative to build a nation that provides all of its citizens with the right to live with dignity.

Those who are granted a voice now will decide the terms and conditions of rebuilding. Progressive Haitians and non-Haitians should work together to transform the racist system that exacerbated the crisis caused by the earthquake. As such, it is important to organize direct aid to the victims of the earthquake, while simultaneously organizing a political movement.

This is a time for the political left to look at Haiti and other marginalized nations, and re-imagine a radical alternative for people who are occupied. Whether it is the Palestinian child in Gaza, the diamond miner in South Africa or the homeless resident of Port-au-Prince, as citizens of the world, we must demand self-determination and equality for all people.