Expanding the war in Pakistan

Jeremy Scahill, author of Blackwater: The Rise of the World's Most Powerful Mercenary Army, reports on the escalation of U.S. military involvement in combat in Pakistan.

THREE U.S. Special Forces soldiers were killed in northwest Pakistan in early February, confirming that the U.S. military is more deeply engaged on the ground in Pakistan than previously acknowledged by the White House and Pentagon.

The soldiers died February 3 in Lower Dir when their convoy was hit by a car bomber in what appeared to be a targeted strike against the Americans. According to CENTCOM, the U.S. soldiers were in the country on a mission to train the Pakistani Frontier Corps, a federal paramilitary force run by Pakistan's Interior Ministry that patrols the country's volatile border with Afghanistan.

A Pakistani journalist who witnessed the attack said that some of the U.S. soldiers were dressed in civilian clothes and had been identified by their Pakistani handlers as journalists. The New York Times estimates that there are 60-100 such U.S. Special Forces "trainers" in Pakistan. Capt. Jack Hanzlik, a spokesman for the United States Central Command said there are about 200 U.S. military personnel in Pakistan. 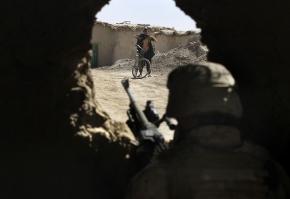 While the deaths of the soldiers has sparked impassioned discussion in Pakistan about the extent of the U.S. military presence, the Pentagon has emphasized that the U.S. soldiers were in Pakistan on a training mission at the invitation of the Pakistani government, saying they were not engaged in direct combat.

But the geography of the February 3 attack--in the northwest of the country in an area where the U.S. has no on-the-ground aid presence and where Pakistani forces have struggled against the Taliban and other insurgents--reveals just how close to the epicenter of the action in Pakistan the U.S. military is.

According to CENTCOM, the soldiers were not members of Delta Force or the Green Berets, instead classifying them as "civil affairs" trainers. Officially, CENTCOM describes this mission as part of an expanding "partnership with the Pakistani military and Frontier Corps," providing "increased U.S. military assistance for helicopters to provide air mobility, night vision equipment, and training and equipment--specifically for Pakistani Special Operations Forces and their Frontier Corps to make them a more effective counter-insurgency force."

In military parlance, these above-board U.S. "training" forces operating under an unclassified mandate are "white" forces, while operatives working for the Joint Special Operations Command (JSOC) would be classified as working on "black" operations, sometimes referred to as Special Mission Units. Since 2006, JSOC teams have operated in Pakistan in pursuit of "high-value" targets.

"What we're seeing is the expansion of 'white' Special Operations Forces into Pakistan," says a former member of CENTCOM and U.S. Special Forces with extensive experience in the Afghanistan-Pakistan theater. "As Vietnam, Somalia and the Balkans taught us, that is almost always a precursor to expanded military operations."

The former CENTCOM employee spoke to The Nation on condition of anonymity because of the sensitivity of the Pakistan operations. He characterized the U.S. military's role with the Pakistani Frontier Corps as "training in offensive operations," but rejected the idea that at this stage these U.S. trainers would cross the line to engage in direct combat against Taliban forces. That does not mean, he says, that U.S. military forces are not fighting in Pakistan. "Any firefights in Pakistan would be between JSOC forces versus whoever they were chasing," he said. "I would bet my life on that."

WHAT HAS gone largely unmentioned in the media coverage of the deaths of the three U.S. soldiers in Pakistan is the role private contractors are playing.

At times, he said, Blackwater forces cross the line from trainers or advisers and actually participated in raids. "That gives the Pakistani government the cover to say, 'Hey, no, we don't have any Westerners doing this. It's all local and our people are doing it,'" said the former executive. "But it gets them the expertise that Westerners provide for [counterterrorism]-related work."

After the U.S. soldiers were killed on February 3, a spokesperson for the Pakistani Taliban claimed responsibility and said the dead men worked for Blackwater. "We know the movement of U.S. Marines and Blackwater guys," said Taliban spokesperson Azim Tariq. "And we have prepared suicide bombers to go after them." The United States dismissed the claim about Blackwater as "propaganda and disinformation."

WHILE THE former CENTCOM employee said the U.S. military's training mission in Pakistan (he is against using contractors for such missions) is in the "U.S. interest," he cautioned that there is growing concern within the military about what is perceived as the disproportionate and growing influence of JSOC's lethal "direct action" mentality on the broader Special Forces operations in Afghanistan and Pakistan.

As The Nation reported in November, JSOC operates a parallel drone bombing campaign in Pakistan, carrying out targeted assassinations of suspected Taliban and al-Qaeda operatives, "snatch and grabs" of high-value targets and other sensitive action. JSOC, a military intelligence source told The Nation, also operates several secret bases inside Pakistan. These actions are deeply classified and not subjected to any form of comprehensive oversight by Congress.

With General Stanley McChrystal, who commanded JSOC from 2003-2008, running the war, forces--and commanders--accustomed to operating in an unaccountable atmosphere now have unprecedented influence on overall U.S. military operations, opening the door for an expansion of secretive, black operations done with little to no oversight.

"The main thing to take away here is a recognition and acceptance of the paradigm shift that has occurred," says the former CENTCOM employee,

Everything is one echelon removed from before: where CIA was the darkest of the dark, now it is JSOC. Therefore, military forces have more leeway to do anything in support of future military objectives. The CIA used to have the ultimate freedom--now that freedom is in JSOC's hands, and the other elements of the military have been ordered to adapt.

The former CENTCOM member said that what is unfolding in Pakistan is part of the Bush-era philosophy, continued by the Obama administration, of "preparing the battlefield." He sketches out a pattern wherein "black" operations are followed by "white" operations and then conventional U.S. forces.

That "preparing the battlefield" justification was often used by the Bush administration to circumvent congressional oversight of clandestine military operations, particularly when McChrystal was running JSOC. The CIA is legally required to brief the Intelligence committees on covert operations, while JSOC has traditionally operated outside the purview of Congressional oversight. "This allows the JSOC/Special Mission Units more freedom to expand or absorb traditionally CIA missions," he says.

Former Defense Secretary Donald Rumsfeld and his deputy Stephen Cambone "embraced this model--so have Obama and [Defense Secretary Robert] Gates--and it persists to this day." He added that "there is a deep, deep resentment" of the influence of JSOC within "the Special Forces community" under Admiral Eric Olson, commander of the Special Operations Command and Vice Admiral William McRaven, the current head of JSOC.

What is clear from the February 3 attack on U.S. soldiers in Pakistan is that the U.S. military is becoming increasingly entrenched in the country. In late January, in Washington, D.C., U.S. and Pakistani military officials gathered under the umbrella of the "U.S.-Pakistan Land Forces Military Consultative Committee." According to notes from the meeting, they discussed CENTCOM's operations in Pakistan aiming to "enhance both U.S. and Pakistan Army COIN [counterinsurgency] capabilities" and "potential U.S. COIN Center/Pakistan Army interactions." Among the participants were representatives of the Special Operations Command, the Chairman of the Joint Chiefs--Pakistan Afghanistan Coordination Cell, the Office of Defense Representative--Pakistan and a Pakistan delegation led by Brigadier General Muhammad Azam Agha, Pakistan's Director of Military Training.

The United States does not publicly acknowledge U.S. military operations in Pakistan. On CENTCOM's Web site, they are described in vague terms. "We will of course continue to target, disrupt, and pursue the leadership, bases,and support networks of al-Qaeda and other transnational extremist groups operating in the region," declares CENTCOM's Pakistan page. "We will do this aggressively and relentlessly."

Since President Obama's inauguration, the administration has downplayed the role of U.S. military forces in Pakistan. In July, Ambassador Richard Holbrooke said bluntly, "People think that the U.S. has troops in Pakistan, well, we don't."

On February 3, after the U.S. soldiers' deaths, his tune changed dramatically: "There's nothing secret about their presence," he said. One thing is certain: as the situation in Pakistan becomes more volatile and the U.S. military presence in the country expands, it will become increasingly difficult for the Obama administration to downplay or deny the reality that a U.S. war in Pakistan is already underway.

First published in The Nation.