Progressives may be angry about William Daley, but they can't claim to be surprised.

AFTER SPENDING millions to defeat the Democrats in the November elections, big business appears to be warming up to President Barack Obama.

The latest occasion for good feelings was Obama's choice of William Daley as the new White House chief of staff, replacing Rahm Emanuel. Fred Malik, a long-time Republican fundraiser, called Daley "the first high-level Obama official who has held a real position in business. He understands the business community."

Obama's appointment of Daley capped a series of moves, including the choice of former Clinton administration official and Goldman Sachs adviser Gene Sperling to replace Lawrence Summers as the White House's chief economic adviser, and the naming of banker Ron Bloom, a key figure in the bankruptcy and reorganization of General Motors, to head administration policy on manufacturing.

Fred Smith, the right-wing CEO of FedEx, praised Obama to the Wall Street Journal: "All of these are excellent, pro-business moves. I've been in Washington enough to know that things move at a Washington pace, not a business pace, but I'm glad to see them happen. Things like this needed to happen to get the economy going."

MoveOn's Justin Ruben said: "The announcement that William Daley, who has close ties to the Big Banks and Big Business, will now lead the White House staff is troubling and sends the wrong message to the American people." Others, including AFL-CIO President Richard Trumka, greeted the Daley choice with an air of resignation.

On one level, Daley's appointment shows how insular Washington and the Democratic Party are. Rahm Emanuel is departing the White House to run for mayor of Chicago. So who does Obama pick to replace him? The brother of the man Emanuel is trying to succeed.

More seriously, Daley's appointment shows just how entrenched the revolving door between Washington and Wall Street is. Daley's move from an executive at JPMorgan Chase to the White House followed by only a few months former budget director Peter Orszag's move from the Executive Office Building to a vice president's position at Citigroup. So much for the Democrats being the "party of the people." 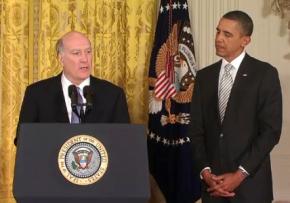 IN ADDITION to being a member of the Chicago political dynasty, Daley is the kind of lobbyist and corporate fixer on which both major parties rely. For those of you who remember the fixtures of past administrations: Think a younger, and less smooth-talking, James Baker.

Not a politician himself, Daley is a corporate lawyer of the sort that political leaders turn to when they want to ingratiate themselves to business. And business reciprocates. When such fixers leave government, they usually have no trouble finding highly paid work with major corporations anxious to milk their Washington connections.

So it's no coincidence that Daley has pulled in paychecks from the telecommunications firm SBC Communications--and more recently served as Midwest chairman for JPMorgan Chase. Both the telecommunications and finance industries are highly sensitive to regulations drafted in Washington, and they've provided cushy jobs for dozens of Clinton-era and Obama-era Democrats. Daley also sits on boards of Boeing and Big Pharma's Abbott Laboratories.

Daley became a prominent national figure in 1993 when Clinton tapped him to coordinate efforts to round up business support for the North American Free Trade Agreement. Four years later, Clinton appointed Daley as Commerce Secretary. From there, he carried on Clinton's pro-business, free-trade agenda--then, triumphantly dubbed the "Washington consensus."

Serving as chair of Al Gore's bungled 2000 presidential campaign against George W. Bush--when the vice president of a popular incumbent during one of the longest economic booms in U.S. history managed to allow an unlikable Republican candidate to get close enough to steal the election--Daley stepped to the podium on election night in Nashville, Tenn., to declare that Gore wouldn't concede the election.

Yet in the 36 days that followed, when Bush and the Republicans--with James Baker in charge--mounted a successful effort to keep the Florida vote from being recounted, Daley continuously counseled Gore to throw in the towel. Despite widespread evidence of Black disenfranchisement in Florida, the Gore campaign refused to mobilize the Democratic "base" to protest the theft.

The defeatist mentality--in the face of a victory over Bush in the national popular vote--started at the top of the campaign. Jeffrey Toobin's Too Close to Call, an account of the stolen election, quotes Daley as telling Gore: "Look, you got screwed," said Daley, "but people get screwed every day. They don't have a remedy. Black people get screwed all the time. They don't have a remedy. Sometimes, there's no remedy. There's nothing you can do about it."

THOSE WORDS of Daley--"there's nothing you can do about it"--could stand as a summary of the post-Clinton Democratic Party's defeatist approach to just about anything that might affect ordinary people, from its surrender to Bush's lies in the run up to the war in Iraq to its far-too-complacent attitude to the current jobs crisis.

Nevertheless, it's wrong to conclude--as many liberals do--that Obama's appointment of Daley and other Clintonites to high-level positions in his administration is a deal with the devil that will sabotage the president's progressive agenda.

True, Daley publicly criticized Obama as governing too far from the "left." And he publicly opposed the creation of the new consumer protection bureau that was part of financial "reform" legislation passed last year. He led the Chamber of Commerce's efforts to gut accounting reforms passed in the post-Enron era.

But seeing Daley as the pro-corporate Svengali manipulating Obama behind the scenes is the same as last year's favorite Washington parlor game: Trying to identify Emanuel as the "saboteur" of the Obama agenda. Both approaches miss the elephant (or donkey) in the room--that Obama picked Daley and Emanuel because he agrees with them, and they are carrying out his agenda. As Salon.com's Glenn Greenwald put it, "Daley is a reflection, not a cause."

Next month, Obama will make a well-publicized pilgrimage to the headquarters of the U.S. Chamber of Commerce, where he will ask for absolution for any sins he committed against big business' agenda in his first two years.

At least, that's the way the press and the right will spin it, despite the Obama administration's pro-business tilt throughout his term in office. In reality, Obama is simply adjusting to a new correlation of forces in the nexus between government and business in Washington.

In Obama's first two years, when the Democrats dominated the government, business had no choice but to deal with Obama and his party in Congress. Now, Obama faces a situation where business has many more willing gofers in the Republican-led House.

Rather than letting the Republican corner all corporate largesse, Obama wants to assert himself as a leader alongside American business on specific "bipartisan" initiatives, like free trade agreements with South Korea and Colombia, and rewriting the corporate tax code. Daley will help grease the wheels for those deals.

The Washington Post's Dan Balz assures us that "the selection of Daley may seem more like continuity than change. Reading it that way would be a mistake." But it's hard to see what's different about Obama's choice of Daley, Sperling and the rest to any of his previous appointments. As the Columbia Journalism Review's Ryan Chittum pointed out, these are only the latest in a long line of pro-business Obama appointments--starting with Tim Geithner, Wall Street's favorite, as treasury secretary.

Progressives may be angry and frustrated, but they can't claim to be surprised. Until and unless they challenge the two corporate parties, the Democrats will continue to treat them with contempt.