The contending views of Rahm Emanuel that appeared recently in the media roughly mirror the debate among Democrats about the administration's first year.

FOR MORE than a month after the Democrats received their wake-up call when Republican Scott Brown won a special Senate election in Massachusetts, official Washington was in a tizzy over Rahm Emanuel.

Depending on whom you listened to, the White House chief of staff and Barack Obama's top adviser was either the "saboteur" of the administration (as Huffington Post writer Dan Froomkin called him) or the "White House voice of reason" (as the Washington Post's Jason Horowitz called him).

First out of the box (and from outside the Washington echo chamber) came the assessment of Progressive editor Matthew Rothschild. On the day following Brown's victory, in a blog post titled "Fire Rahm Emanuel," Rothschild pointed out Emanuel's roots in the Democratic Leadership Council (DLC), a self-selected group of the party's conservatives. "Emanuel is a DLC Democrat, and he's advised Obama to go in a DLC direction time and time again--and to disregard the progressive base," Rothschild wrote. "Now Obama is paying for it."

The problem with this inner circle, Luce wrote, is that it approaches every White House challenge as if it was still running a presidential campaign. This doesn't work in government, where the administration needs help from other Washington players to get its agenda passed.

While the Luce article tended to portray Axelrod, Jarrett and Gibbs as loyalists laboring behind the scenes, it zeroed in on Emanuel as a bigger source of trouble for Obama:

Administration insiders say the famously irascible Mr. Emanuel treats cabinet principals like minions. "I am not sure the president realizes how much he is humiliating some of the big figures he spent so much trouble recruiting into his cabinet," says the head of a presidential advisory board who visits the Oval Office frequently. "If you want people to trust you, you must first place trust in them." 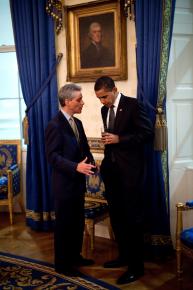 "We are treated as though we are children," a principal in a liberal lobbying group told Luce. "Our advice is never sought. We are only told: 'This is the message, please get it out.' I am not sure whether the president fully realizes that when the chief of staff speaks, people assume he is speaking for the president."

The only major figure to go on record in Luce's piece was John Podesta, head of the quasi-liberal Democratic think tank, the Center for American Progress. In the article, Podesta urged the Obama White House to make more use of a wider layer of people in his administration to sell his policies.

WITHIN THE narrow confines of mainstream Democratic politics, Luce's piece gave voice to those who think that the administration is perceived as relying too much on back-room dealings. It could be read as a call to Obama to mobilize his supporters to push for his agenda in Congress.

It's likely that many of Luce's informants were frustrated members of Common Purpose, the weekly meetings with the White House of mainstream liberal organizations that coordinate "messaging" with the administration. Liberal blogger Jane Hamsher has criticized these meetings as a "veal pen," where progressives go to surrender themselves and their organizations to the White House's dictates.

It was at one of these meetings that Emanuel supposedly called liberals planning to press conservative Democrats to support publicly financed health insurance "fucking retards."

Before the liberal criticism of Emanuel could take root, a counteroffensive was brewing in the Washington Post. First, came the February 21 column by Dana Milbank, who called Emanuel "the only person keeping Obama from becoming Jimmy Carter." Milbank disparaged the rest of President Obama's main advisers--Jarrett, Axelrod and Gibbs--as little more than star-struck Obama cultists.

In Milbank's telling, Rahm's wise counsel to Obama to scale back the health care bill and to avoid holding 9/11 trials in New York City was ignored, much to Obama's misfortune.

After Milbank's Rahm revisionism came a longer and even more effusive article on March 2 by Jason Horowitz that called Emanuel a "voice of political reason" in the White House. This article rounded up a number of Democrats who said things like: "I don't think the White House has listened to [Emanuel] enough."

Whether inspired directly by Emanuel, or by proxies for Emanuel, this media counteroffensive had a clear message: Emanuel was the only adult in the White House. Too many of Obama's advisers are courtiers enamored of Obama's image as a transformational president. If Obama had followed Emanuel's advice to scale down his ambitions, the White House would be rolling up victories and accomplishments.

Not coincidentally, in the pro-Emanuel canon, all of Obama's supposedly ill-advised and starry-eyed policies were those that liberals had championed--such as the closing of the Guantánamo Bay prison camp or the inclusion of a "public option" in the health care bill.

Apparently, presiding over the largest government rescue of a financial system in world history or attempting to remake Afghanistan and Pakistan to conform to U.S. imperial interests were not goals that were "too ambitious." In fact, they weren't even mentioned as issues of contention in the pro-Rahm stories.

The New York Times--no doubt smarting from the Washington Post's scoops--weighed in with an even longer story, Peter Baker's "The Limits of Rahmism," in the Times' Sunday magazine on March 14.

In a very NYT kind of way, the article tried to sift through the competing claims, giving weight to both Emanuel's critics and cheerleaders. It gave the last word to Axelrod, who says, "We don't know how the story ends."

WHAT ARE we to make of all of this?

Without getting into the minutiae of charges and countercharges, it's clear that these views of Emanuel roughly mirror the debate among Democrats about the Obama administration's first year.

The liberals who believed that Obama had a strong mandate for change attack Emanuel's cynical Beltway maneuvering for sabotaging the president's best impulses. The pro-corporate "centrist" Democrats and their establishment fans champion Emanuel against the progressives.

What does these facts say about to the narratives that developed in February and March about "Rahmism"?

At the most basic level, they severely challenge the idea that Obama is a left-of-center Democrat whose chief of staff is pushing him off the path of righteousness. As the economics blogger Yves Smith pointed in her reading of the kerfuffle over Emanuel, if Obama was really perturbed by the "talking out of school" in Luce's and Milbank's articles, he would have made sure that no more "Rahm was right, Obama is a chump" stories appeared in the press.

While it may be too clever by half to accept Smith's guess that a Machiavellian Obama may have okayed the pro-Rahm stories, the fact that Obama is accepting Emanuel's presumed views on Guantánamo and (to a lesser extent) on health care reform underlines the message: Obama endorses Emanuel's politics, and liberals have no alternative but to get in line.

For "veal pen" liberals who want to continue to delude themselves otherwise, there's the foil of the foul-mouthed Rahm preventing President Obama from expressing his progressive self. They can try to rally the "base" to support the "Obama agenda" of their dreams, rather than the real agenda that Emanuel and Obama are promoting together.

And as long as liberals consent to remain inside the veal pen, they'll be the ones played as chumps.