A hazing ahead for the UAW

The Big Three automakers are out for even deeper concessions in the 2011 contract round--and leaders of the United Auto Workers (UAW) union seem ready to meet them more than halfway. Gregg Shotwell, a founder of the Soldiers of Solidarity rank-and-file network, now retired after more than three decades at GM and Delphi, looks at what's in store during negotiations--and the possibility of an alternative brewing among autoworkers at Ford.

SPECULATION IS a game for rubes. High rollers don't gamble--they steal and call it a deal. So let's not speculate, let's talk about what we know.

UAW President Bob King longs to be partners with the bosses, and the bosses are eager to initiate their new pledge with a hazing ritual called Concession Bargaining.

Come contract time, King and Co. will tell UAW members: "We did the best we could given the state of the economy and the political caterwaul." Then King will bombast on and on about job security and built in the USA as if working for a bag of dirt a day will transform the working class into landed gentry.

We knew this was coming two years ago even if we didn't admit it. The 2011 UAW contracts with GM and Chrysler were preordained with a no-strike clause in 2009.

King is on a mission to cinch the loose purse strings of the bankruptcy extortion. Meaning: the termination of defined-benefit pensions--the last vestige of 20th century union benefits.

What did you think they meant when they said the goal in 2011 contracts is parity with foreign transplants? Free pizza? 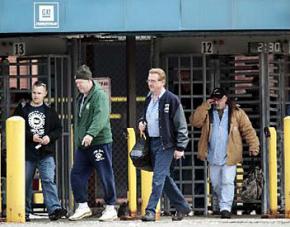 The companies will pay more cash than they would have liked upfront, but Wall Street will slaver over a portfolio free of legacy costs, and the UAW-VEBA health care fund will glimmer like a Michigan cherry tree in July.

The package will be gift-wrapped for members who can retire under this contract. The agreement will forklift money into the pockets of workers eager to bail out and kiss the scorched-earth promised land of retirement.

Those who can't retire under this contract will get a cash swap in exchange for pension credits. They will be free to invest in UAW-represented casinos, the falling value of their homes or a defined contribution 401(k) account, which they can manage expertly with their own guesswork.

Consider how few workers the companies have hired in the last 25 years of chronic downsizing. The demographics are top-heavy with 50-somethings eager to jump off the merry-go-round. Among those who can't retire, consider how many are underwater on their mortgages and cars. They'll think they died and went to Mardi Gras as they swap their legacy for a noose of proverbial beads.

The lump-sum signing bonus will benefit members who can retire, as every signing bonus pays upfront like a john with an abbreviated attention span. Depression won't set in until after they realize out-of-pocket medical expenses are welded to an upscale escalator.

Active workers can count on trading in the Cadillac health care plan for a Vega, a Pinto or a Gremlin. There will be a COLA formula so diabolically complicated the devil will hire an attorney to help him find his way out of the details.

The loss of upfront bonuses not getting folded into base wages--unlike raises--will multiply like fees on an overdrawn bank account. But who counts losses that won't appear until later...besides the nerd in the cubicle with a nose for actuarial investment strategies?

Seasoned workers feel wary of any deal, but young guns would rather mount a gift horse than look it in the mouth, because according to a dead rock star, "The future's uncertain, and the end is always near."

Flex and temp and subcontracted transients will infest the plants under cover of willful ignorance and bonus intoxication. Each UAW contract will be back-loaded with infamous Memorandums of Understanding.

An MOU at Local 699, a former GM plant in Saginaw, permits the company to maintain 15 percent of the workforce as permanent temps--the most dangerous oxymoron in our lexicon.

MOUs like the one at Local 699 contradict the expressed will of the membership, but King and Co. treat their contract with dues-paying members--the UAW Constitution--like toilet paper.

No one has to do the math to understand upcoming UAW negotiations with the Detroit Three are not just about dollars and sense. The contract is about suppression of rank-and-file rebellion against company unionism.

King is eager to join the Corpo Rat Frat Club, but UAW members at Ford may have a better idea. It's old-fashioned, but it's made of tough stuff: shopworn, scuffed and battle-hardened as pavement-pounded boots.

Come September, King Bob may have a strike he can't control.