Why is Barack Obama claiming that he stood up to the Republicans' assault on workers when he really stood aside and let the social safety net be slashed?

AFTER WEEKS of high-profile, rancorous debate over raising the federal government's debt ceiling, the Obama administration and congressional Democrats caved to almost every Republican demand.

The cuts will total $2.1 trillion over 10 years--a stake in the heart of what remains of the welfare state, as SocialistWorker.org put it at the beginning of August. Cherished government programs like Social Security and Medicare are on the chopping block in the name of balancing the budget during bad economic times.

And yet Barack Obama is on the road right now--on a bus tour of the Midwest--where he's trying to further the myth that he "stood up to the Republicans."

Obama wants to have his cake and eat it, too. With his 2012 reelection campaign firmly in mind, Obama wants to paint Republicans as the villains of the debt ceiling debate--even though he capitulated to those same Republicans and crafted a bipartisan austerity policy that will make the lives more difficult for the millions of working people who supported him in 2008. 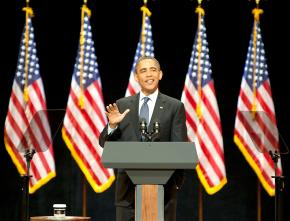 Some liberal commentators are buying the deception and basking in the glow of what they see as the "The new old Obama." That's the title of a column by the Washington Post's E.J. Dionne, who argued:

Obama's aides say he understood liberal anger over the Republicans' irresponsibility in using the default threat to strengthen their own bargaining position. But while progressives wanted the White House to call the right wing's bluff, Obama insisted that this was not a risk a president could take. He preferred to escape this box with the best flawed deal he could get, provided he could take the lethal debt-ceiling weapon out of Republican hands.

Having done so, the White House now sounds liberated...The president's speech last Thursday in Holland, Mich., was the first sign that the competitive Obama is re-emerging. His target, like Harry Truman's in 1948, was an obstructionist Republican Congress. He condemned "the refusal of some folks in Congress to put the country ahead of party" and urged that it "start passing some bills that we all know will help our economy right now."

A question for Dionne: Wasn't 1948 also the election in which Truman promised to veto the anti-union Taft-Hartley bill--with full knowledge that Congress would override his veto. Indeed, it did, with a majority of Democrats in the House and the Senate voting for it.

This is a taste of what's to come from liberal establishment as the 2012 elections approach--refashioning a corporate servant into a "friend of the working class" for the purposes of winning votes.

But Obama's tough talk in the Midwest isn't working with millions of people whose disappointment in the administration is closer to the surface than ever.

Many of them may eventually be pressured into voting for the Democrats in order to keep the Republicans at bay, but for more and more people, there's nothing positive to vote for. Two weeks after the debt ceiling deal, Obama's job approval rating was at an all-time low--39 percent, according to Gallup. Then again, he has a lot of company--the disapproval rating for Congress reached 84 percent.

IF OBAMA and the Democrats wanted to put forward an economic agenda that addressed the scale of the ongoing economic crisis--in particular, the high level of unemployment--they could. But that would mean jettisoning the principles that they hold dear--above all, protecting Corporate America.

During the debate over the debt ceiling, Congress couldn't even manage to approve a reduction in tax loopholes for the wealthiest Americans, much less increase taxes for those who can afford it most.

Corporate America hasn't been asked to tighten its belt during the crisis--in fact, the rich have had to let theirs out a notch.

According to its May report, consultant Bain & Company forecasts an 8 percent increase in global luxury store sales in 2011. "I think there was a moment, certainly in 2009, when people felt that [embarrassment], but in 2010, the luxury car market, including Maserati, Lamborghini and Aston Martin, saw growth of about 60 percent, so that was a substantial increase after what was a fairly depressed market in 2009," David Arnold, publisher of luxury magazine, the Robb Report, told CNBC.

If the government simply closed corporate tax loopholes, it could raise massive amounts of revenue in an instant.

The statutory corporate tax rate is 35 percent, but myriad deductions, credits and other special breaks mean that the taxes actually paid by business are much less--an estimated 13.4 percent of profits over 2000-2005 period, according to the Treasury Department. Robert McIntyre of Citizens for Tax Justice reports that tax breaks for corporate and other businesses will cost the federal government about $364.5 billion in 2011--or a billion dollars every day.

If this amount were collected and put to use, it could take care of about half of the $700 billion that the government spent on Social Security last year.

The fact that wealthy Americans rake in so much while paying so little is no secret. "My friends and I have been coddled long enough by a billionaire-friendly Congress," multi-billionaire investor Warren Buffett admitted in a New York Times op-ed article. "It's time for our government to get serious about shared sacrifice." Noting the decline in tax rates for the rich, Buffett suggests immediately raising rates on taxable income in excess of $1 million, and even more for those who take in more than $10 million a year.

As for the cutbacks, there are plenty of bloated federal programs to take a look at--not Social Security and Medicare, but the military.

The U.S. wars in Iraq and Afghanistan--including personnel, equipment, training Iraqi and Afghan security forces, and deploying intelligence-gathering drones--cost an average of $9.7 billion a month, according to the Defense Department. In a year's time, this wasted money could pay the wages of about 2.4 million firefighters.

What about other wasteful federal programs that perpetuate dependants leeching off the government? There's the Department of Homeland Security, whose contractors report a "vibrant" market despite the federal budget concerns, according to National Defense magazine. Or nuclear power, a dangerous and inefficient industry that depends on public subsidies to survive.

These cuts, however, are off the table--because when Washington talks about "shared sacrifice," they mean "shared" by workers, the poor and the elderly.

The consequences for those who are bearing the brunt of the burden are potentially devastating. For example, under the changes in Social Security proposed by Barack Obama's deficit-cutting commission last year--and still thought to be the blueprint for "reforming" the Social Security system--annual adjustments would fall behind the real cost of living. According to the National Women's Law Center, the average 65-year-old retiree who now gets about $16,800 a year in Social Security would get $852 less per year (after adjusting for inflation) by age 80. At 90, they would get $1,332 less in 2010 dollars, an 8 percent reduction.

To the affluent, those differences might not seem huge. But tens of millions of elderly Americans rely on Social Security as their major source of income: 52 percent of elderly couples and 73 percent of non-married beneficiaries, according to the latest data. And those fractions could rise as traditional pensions vanish and private savings are battered by bad luck, bad decisions or bad markets.

WORKERS--WHETHER they are unemployed or employed, working or retired--are being forced to pay for an economic crisis and financial market instability that they had nothing to do with causing.

Washington's strategy, meanwhile--even for those politicians who are willing to talk about the need for measures to create jobs--is to lavish further tax incentives on corporations. The theory is that if Corporate America is healthy, it will employ more workers. But Corporate America is doing just fine, yet their record profits aren't making it to workers in the form of investments in new jobs or improved wages and benefits for workers who are still employed.

The federal government could put people to work in good-paying union jobs, rebuilding crumbling city infrastructure like bridges, road and schools, providing affordable health care, and creating new sustainable energy resources, like wind and solar. But political leaders of both parties would rather invest in Corporate America--which in turn invests in itself.

Shifting these warped priorities won't come from any bipartisan congressional "super-committee" or someone in the Obama White House.

It will be up to ordinary people organizing together to expose Washington's long love affair with Corporate America--and point out that the money is there to not only stop the erosion in living standards for the majority of people, but to raise them.