WHILE THE media focused on the Washington charade over raising the federal debt ceiling and cutting the estimated budget deficit, a a one-time audit of the Federal Reserve released in late July showed that the Treasury Department and Federal Reserve Bank have doled out an incredible $16 trillion in assistance to financial institutions and corporations in the U.S. and around the world.

The audit, conducted by the U.S. Government Accountability Office (GAO), was mandated as part of the Wall Street Reform and Consumer Protection Act sponsored by Democratic lawmakers Christopher Dodd and Barney Frank.

The audit revealed that the various emergency lending facilities, guarantee programs and bailouts for Wall Street--a project wholeheartedly supported by both major parties--was in itself far larger than the deficit that now has the same parties gunning for deep cuts to critical social programs.

A table--buried on page 131 of the audit--shows the staggering figures. Of the $16.1 trillion in bailout money overall, most went to a handful of U.S. and international financial institutions. Through the various mechanisms, Citigroup borrowed $2.5 trillion, Morgan Stanley took $2 trillion, Merrill Lynch received $1.9 trillion, and Bank of America got $1.3 trillion. With a total of $8.8 trillion among them, the four banks account for more than half of the total bailout. 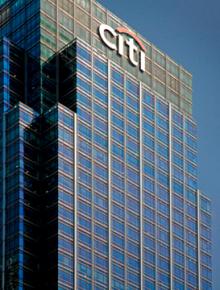 Other recipients that received loans worth $500 billion or more included the British banks Barclays and the Royal Bank of Scotland Group, as well as Wall Street colossus Goldman Sachs and the defunct investment bank Bear Stearns.

The Bloomberg news service made a big deal of the results of its own audit, which showed that Wall Street banks received $1.2 trillion in secret loans. That number has been widely reported, and a number of politicians postured over the findings.

But the $16.1 trillion bailout money trail turned up by the GAO audit has been met with silence.

The outrage goes beyond the numbers alone. The audit also revealed that the people making decisions about what banks were to receive emergency loans often had investments in those same banks. A summary of the audit on Vermont Sen. Bernie Sanders' website noted:

For example, the CEO of JPMorgan Chase served on the New York Fed's board of directors at the same time that his bank received more than $390 billion in financial assistance from the Fed. Moreover, JPMorgan Chase served as one of the clearing banks for the Fed's emergency lending programs.

In addition, the report found that the Federal Reserve awarded 103 contracts worth $659.4 million from 2008 through 2010 to help carry out their emergency activities--often to the very same firms that were beneficiaries of those programs.

Most of these contracts were also awarded "non-competitively," meaning that the banks didn't even have to submit rival bids to receive the work. Furthermore, the audit shows that on-site reviews to manage potential conflicts of interest didn't taken place for up to 12 months after the contracts were awarded.

So not only were the banks administering programs that doled money out to their own firms, but they also got paid big fees to do the work. They didn't have to compete with anyone to receive the contracts, and had nobody looking over their shoulders for up to a year.

IN ADDITION to the GAO report, in mid-August, the blog EconMatters did a rundown of various assessments of the original $700 billion Wall Street bailout program passed by Congress in 2008, alongside other giveaways, and how much of that cash had been paid back.

EconMatters noted that although the Treasury Department declared in July 2010 that the federal government's outlays had been paid back, estimates by the Center for Media and Democracy found that a whopping $1.5 trillion out of $4.8 trillion in federal bailout funds are still outstanding:

This comprehensive assessment of the bailout goes beyond the relatively small Troubled Asset Relief Program (TARP) program to look at the rest of the Treasury and Federal Reserve's multi-trillion-dollar response to the financial crisis. It shows that while the TARP bailout of Wall Street (not including the bailout of the auto industry) amounted to $330 billion, the government also quietly spent $4.4 trillion more in efforts to stave off the collapse of the financial and mortgage lending sectors. The majority of these funds ($3.9 trillion) came from the Federal Reserve, which undertook the actions citing an obscure section of its charter.

Moreover, most of these loans and handouts were made interest free. So even in instances where banks have paid back the funds, the government didn't get anything out the deal or take in any funds that could have gone toward reducing the deficit. Instead, that burden is being thrust upon working people.

At the same time, the non-stop bailout via extremely low interest loans allowed the banks to maximize profits.

With TARP, for example, R.J. Eskow pointed out, "These banks received short-term loans at 1.1 percent, instead of the prevailing 3.8 percent. That means each bank received a gift of $27 million each--tax-free, no less--for every billion they received under that particular program."

The kicker to all of this is that he banks are still getting special treatment, receiving nearly free money from the Fed and profiting off it, too.

That's because the Fed is paying banks 0.25 percent interest on "excess reserves" that banks aren't lending, but are keeping on deposit at the Fed. In essence, banks are being paid to not lend money. Overall, banks have $1.6 trillion in excess reserves locked up on deposit.

0.25 percent interest may not sound like much, but it's more than the banks are paying you to keep money in your savings or money-market account. It's also more than you'll earn if you lend the federal government money for two years.

Oh, by the way, why, exactly, are you earning so little interest in your savings accounts and money-market funds? Well, because, thanks to another one of its bank-bailout programs, the Fed is keeping short-term interest rates at zero. In other words, the Fed is paying banks not to lend money and screwing you.

Of course, that only applies to Americans lucky enough to have some savings in the bank. With unemployment at high levels, wages and benefits under sustained attack, houses underwater, and health care costs skyrocketing, that's fewer and fewer people.

Blodget was right about his last thought: "God, it's great to be a banker."